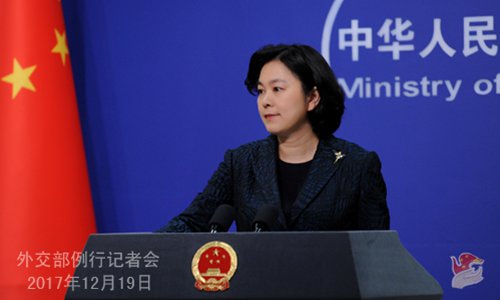 China has urged the US to stop purposely misinterpreting China's strategic intentions after the US labeled China and Russia "rival powers" that "were aggressively undermining American interests around the globe" in its National Security Strategy (NSS) on Monday.China's Foreign Ministry Spokesperson Hua Chunying said at a press conference on Tuesday that cooperation is the only correct choice for China and the US. "We urge the US side to stop purposely misinterpreting China's strategic intentions, abandon its outdated Cold War and zero-sum thinking. It will only harm both sides," Hua said.As two large countries, it is not surprising that there is some divergence between China and US interests. In this regard, the two countries should properly deal with the problems using constructive measures in line with each others' core interests and important concerns, Hua said."US and China are competitors in many aspects such as market share, energy and geographical interests. But to maintain sound development of bilateral relations and global stability, the two countries need to deal with competition to avoid conflicts," Lin Guijun, vice president at the University of International Business and Economics, told the Global Times. The US' unfair accusation of China stealing its intellectual property shows the US is maintaining a technological monopoly, which increases consumer costs and impedes the flow of knowledge, he said.The Chinese Embassy in the US said Tuesday in a statement on its website that "preaching rivalry and confrontation goes against the global trend, and will lead to failure."Path to industrial powerFollowing the NSS, US Treasury Secretary Steven T. Mnuchin said in a statement that "we will leverage our powerful financial sanctions and other tools to counter rogue regimes, terrorists, and others who threaten American ideals." At the end of November, the US announced new anti-dumping and countervailing duty investigations into imports of common alloy aluminum sheets from China and then submitted a statement regarding China's "non-market economy" status to the WTO.Chinese experts remarked that whatever protective measures the US takes, it will hardly hinder China's development, especially the fast growth of its high technologies and Internet sectors.In recent years, China's scientific development has closely followed, if not overtaken the US, and is represented by its four key innovations of high-speed railways, Alipay, bicycle-sharing and e-commerce, said Wang Jun, deputy director of the Department of Information at the China Center for International Economic Exchanges.Chinese Premier Li Keqiang introduced the "Made in China 2025" strategy and The Internet Plus initiative, in a bid to move traditional industries to higher value-added products using technology and to invest in establishing new capabilities in 10 new high technology industries.Under the guidance of these policies, domestic companies and scientific research institutions should continue to carry out win-win cooperation with their counterparts in developed countries, gradually realizing industrial upgrading and economic growth, said He Weiwen, senior fellow with the Beijing-based Center for China and Globalization.Lin said Chinese companies should understand US laws and strengthen independent innovation to improve their industrial competitiveness. "Independent innovation should not be a copy of foreign applications, and should rely on fair competition mechanisms. The country should strictly manage subsidies by following WTO rules," he said.Despite trade frictions since US President Donald Trump took office in January, Sino-US trade has maintained steady growth. Latest data from the Chinese General Administration of Customs showed that trade between the two countries totaled $527 billion in the first 11 months, surpassing the full-year record of $519.6 billion in 2016.Friction and competition from the US may increase in 2018, but bilateral cooperation is also expected to be strengthened, He noted, adding that bilateral trade may reach $600 billion next year.