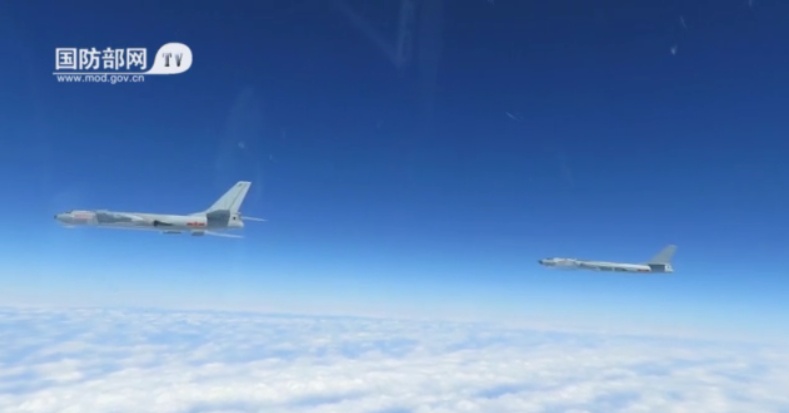 "China has undisputable sovereignty over the islands and their adjacent waters in the South China Sea, and this has been supported by ample historical and legal facts," Senior Colonel Ren Guoqiang, spokesman for the Ministry of National Defense, said at a regular news briefing on Thursday.

He said that the US stirring up troubles in the South China Sea will only enhance China's resolve to protect its sovereignty and security interests.

"We hope the US side will abandon its Cold War and zero-sum-game mentalities, rationally view China-US military relations and bilateral ties, and do something constructive to enhance relations and safeguard mutual interests of both parties," he said in response to the US recently intensifying military patrols in the region.

Chinese experts have warned that the risk of a small-scale conflict between China and the US in the South China Sea has risen drastically due to persistent US military patrols and the US Department of State declaring most of China's claims in the region illegal.

They said the US military will likely increase activity in the strategic waterway before the 2020 US presidential election in November to distract the public from more pressing domestic issues in an attempt to help US President Donald Trump win reelection.

Therefore, China needs to prepare for various potential emergencies and accidents, including the "worst-case scenario" in which the US may launch a surprise attack, they said.

Ren also revealed on Thursday that the naval aviation units of the Southern Theater Command of the People's Liberation Army had recently conducted "high intensity" exercises in the South China Sea to improve pilots' combat techniques and all-weather fighting capability.

He stressed that the exercises are planned drills in this year's training schedule and involved new warplanes such as H-6G and H-6J bombers.

Wang Wenbin, spokesman for the Foreign Ministry, said at a news briefing on Tuesday that US military aircraft carried out over 2,000 missions in the South China Sea in the first half of the year. Experts said these activities ranged from provocative close-range reconnaissance to relatively benign maneuvers like aircraft takeoffs and aerial refueling.

The South China Sea Strategic Situation Probing Initiative, a Chinese nonprofit research institution, said more than 60 US surveillance aircraft had patrolled the South China Sea, as well as the coastal provinces of Guangdong, Fujian and Zhejiang from July 1 to 27.

Experts said that the US hopes through these military operations to rally support from allies, such as Japan, India and Australia, and invite them to jointly meddle in the South China Sea.

This would also force nations in the region that are assiduously maintaining neutrality to choose between China and the US, leading to the creation of a united front led by the US against China, the likes of which China hawks such as US Secretary of State Mike Pompeo have tried to forge with only limited success, the experts added.

The high-profile presence of US forces in the South China Sea will also help repair the US military's prestige as a global fighting force, they said. That reputation has been tarnished by the prolific spread of COVID-19 within its ranks and the back-to-back fires aboard the USS Bonhomme Richard and USS Kearsarge during maintenance in mid-July.

Tension in the South China Sea has been at a boiling point since July 13, when the US State Department declared China's claims to much of the South China Sea unlawful. The next day, Assistant Secretary of State David Stilwell asserted that the US is "no longer going to say we are neutral on these maritime issues" and warned "nothing is off the table".

Bonnie Glaser, a senior adviser on Asia at the Center for Strategic and International Studies, a US think tank, said in a commentary that Washington may consider bilateral measures including economic sanctions against Chinese companies and research institutions, increasing military patrols and providing direct naval support to US partners in the region.

On the global stage, the US may work with regional allies such as Japan, Australia and other countries to conduct joint missions or issue joint statements in support of legal rights of other South China Sea claimants. The US may also impose penalties on China for damaging the ecosystem under international law, she said.

Li Haidong, an international relations professor at China Foreign Affairs University, said the US has changed the status quo by abandoning its former neutrality and is now actively engaging in military competition with China in the South China Sea.

"The South China Sea is a crucial theater of interest for the US sphere of influence in the western Pacific. Being a maritime superpower, the US will not compromise on its maritime interests in the region," he said.

As the presidential election draws near, Li said the Trump administration may take advantage of China-related issues to shift blame and distract voters from its own failures, thereby building political consensus and rallying public support, he added.

"The US military will most likely maintain its high-profile presence in the South China Sea, increasing the risk of accidents or military friction with China," he said. "While a military conflict with China isn't a priority option for the US, a crisis in the region may emerge that requires wisdom from both sides to resolve."

Major General Jin Yinan, a professor at PLA National Defense University, told China National Radio that over 150 US military bases around the world have reported cases of COVID-19. As of July 20, the Pentagon recorded 21,909 service members testing positive, an increase of 3,893 cases over the previous week.

"The US military's botched handling of COVID-19 has made people question its ability to conduct long-distance maritime operations," he said. As a result, the US military must constantly flex its muscles in the Asia-Pacific, including in the South China Sea, to reassure the world that it is doing fine, he added.

Hu Bo, director of the South China Sea Strategic Situation Probing Initiative research institution, wrote in an analysis this week that it is highly unlikely that China and the US will engage in a major war, but the risk of small-scale armed conflict is increasing day by day.

"A controllable military conflict with China in the South China Sea has always been an option for the US military," he said, adding US officials have been contemplating this scenario since 2015 and the US military has made a series of tactical adjustments toward that end.

Zhu Feng, the executive director of the Collaborative Innovation Center of South China Sea Studies, said frequent US military operations in the South China Sea are "politically charged", with goals to pressure China and expand US military and diplomatic influence in the region.

"It also acts as the cohesion agent to build bipartisan consensus within the US government," he said."Leaders from both countries should keep a level mind, and proactively avoid further escalation and an accidental misfire."