CHINA US MQ-9 drones use China as imaginary enemy, ‘easy to shoot down’

US MQ-9 drones use China as imaginary enemy, ‘easy to shoot down’ 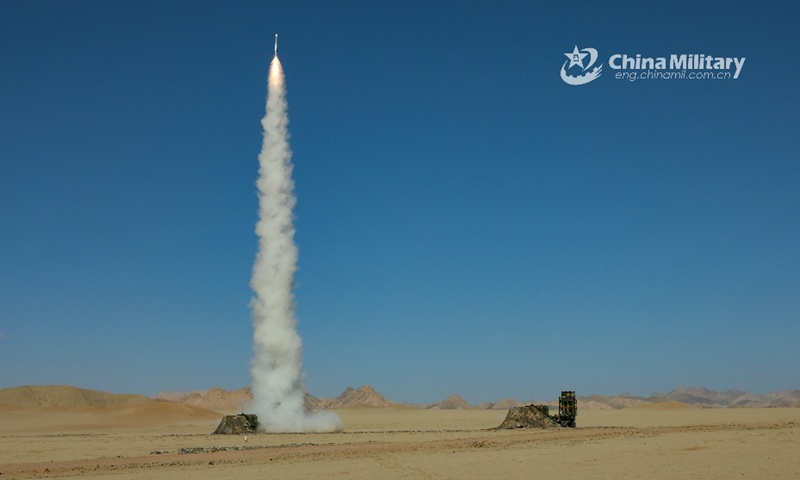 An HQ-16 medium-range air-defense missile system attached to an air defense brigade under the PLA 77th Group Army launched a rocket into the air at a military shooting range in desert area in late August, 2020. (Photo: eng.chinamil.com.cn)

China can easily shoot down the US' MQ-9 Reaper drones - a type of aircraft designed for anti-terrorism missions and to "bully" armed forces without proper air defense systems - should the US send them and launch attacks on China, Chinese military experts said on Tuesday, after US media reported that the US Air Force is using China as an imaginary opponent of the drones.

The US held "Exercise Agile Reaper" - the first training event featuring MQ-9 drones in the Pacific focusing on tactics including maritime interdiction capabilities - from September 3 until Tuesday, the Air Force Magazine, an official publication of the US Air Force Association, reported on Thursday.

During the event, the US airmen wore patches on their uniforms featuring an MQ-9 superimposed over a red silhouette of China, the report said. The US Air Force's arrogance is on display as it is making China an imaginary enemy for the drones, analysts said.

The MQ-9 is not worth worrying about for China, because it does not possess stealth capabilities and flies at a low speed and low ceiling, which makes it an easy target for ground-to-air missiles, Fu Qianshao, a Chinese military aviation expert, told the Global Times on Tuesday.

Armed reconnaissance drones - like the MQ-9 - can only be deployed when facing smaller countries and regions with less developed armed forces that do not have adequate air defense capabilities, Fu said, noting that many US drones have been shot down in their previous missions.

For example, Iran shot down a US RQ-4 Global Hawk drone in 2019, a type of drone analysts said is technically more advanced than the MQ-9. Even Yemen's Houthis forces have downed multiple MQ-9s since 2017.

A report by US military newspaper the Stars and Stripes on Saturday said that the MQ-9's capabilities could come "in handy" in a location such as the South China Sea.

If the US were to launch such kind of attacks, however, it would be a declaration of war, and the US would face serious consequences, Fu said.

China will unquestionably launch a counterattack, Fu said, noting that the MQ-9 will be like a practice target, of which the Chinese military has many methods at its disposal to deal with.

Even the US Air Force Magazine acknowledged in its report that the US Air Force has grown skeptical over the MQ-9's capability against an opponent such as China, as it could be easily shot due to its lack of stealth and its transmissions could be jammed.

The promotion of the MQ-9 as a tool against China is only a ploy used by the US Air Force to make this "obsolete" drone look useful again, analysts said.