CHINA US, North Korea urged to meet each other halfway, show sincerity

US, North Korea urged to meet each other halfway, show sincerity 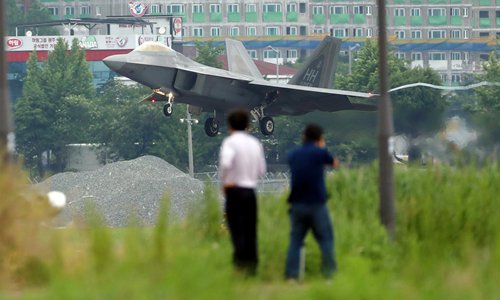 A US Air Force F-22 Raptor lands at Gwangju Air Base in the South Korean city of Gwangju on Wednesday. North Korea canceled high-level talks due on Wednesday with South Korea over the Max Thunder joint military exercises being held between the US and South Korea. (Photo: AFP)

China on Wednesday urged the US and North Korea to meet each other halfway, show good will and sincerity, and together create good conditions and the right atmosphere for their leaders' summit.

Foreign ministry spokesperson Lu Kang said the two sides should avoid behavior that could stimulate or trigger tensions on the Korean Peninsula.

Lu made the remarks after North Korean Vice Foreign Minister Kim Kye-gwan said earlier Wednesday that Pyongyang would reconsider the summit with the US if it comes under continued pressure for Pyongyang to "unilaterally" abandon its nuclear program.

"We will not be interested in talks anymore if (they) only try to push us unilaterally into a corner and force us to give up nukes," he said in a statement carried by North Korea's state media KCNA.

He urged Washington to join talks with sincerity, which would be met by a "proper response" from the North.

The KCNA called the air drills a "provocation" that goes against the trend of warming ties.

"This exercise targeting us, being carried out across South Korea, is a flagrant challenge to the Panmunjom Declaration and an intentional military provocation which runs counter to positive political developments on the Korean Peninsula," KCNA said, referring to a joint statement from an April 27 inter-Korean summit.

The US is still "hopeful" the planned summit will proceed but Trump is prepared for a tough negotiation process, White House spokeswoman Sarah Sanders said on Wednesday, Reuters reported.

"The situation is that Pyongyang has been making continuous concessions, including a pledge to dismantle its nuclear test site by the end of this month, but the US and South Korea have made no substantial effort in return," Zheng Jiyong, director of the Shanghai-based Fudan University Center for Korean Studies, told the Global Times.

"From Pyongyang's perspective, dismantling its nuclear test site is the ultimate concession. After making this concession and agreeing to a summit in Singapore, the US and South Korea continued to maintain their so-called extreme pressure, leaving Pyongyang feeling exploited and that it must concede no more," Zheng noted.

North Korea has made warm gestures, including participating in the PyeongChang Winter Olympics, the inter-Korean summit, agreeing to a summit with the US in Singapore and releasing US prisoners.

However, John Bolton, Trump's national security adviser, said on Sunday that Pyongyang could expect no assistance or relaxation of sanctions until it fully dismantles its nuclear weapons and ships them to the US.

Analysts said both the US and North Korea will face the political consequences if Trump-Kim summit is canceled.

"In the run-up to the summit, other diplomatic quarrels will surface, as both sides are bargaining. Despite the twists and turns, the probability of a Trump-Kim summit remains relatively high," Zheng told the Global Times.

He noted that Pyongyang's threat could deal a blow to South Korean President Moon Jae-in, as the country will hold local elections on June 13, a day after the summit.

"The public has become too optimistic with developments on the Korean Peninsula since the inter-Korean summit. Solving the nuclear crisis is a complicated process and one must be prepared for setbacks," said Lü Chao, a research fellow at the Liaoning Academy of Social Sciences.

Analysts said North Korea will continue pushing for talks due to warming ties with China.

"China and North Korea have reached many consensuses in the two meetings between their leaders, including using phased and synchronous measures to resolve the peninsula nuclear issue. Warming ties with Beijing can bolster Pyongyang's diplomatic game with the US," Da said.