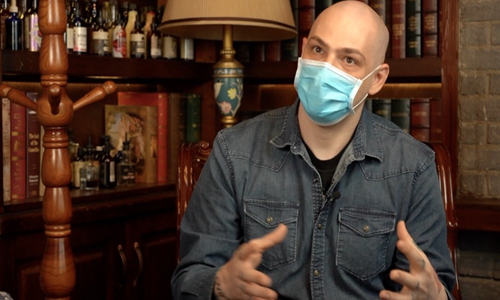 Nathan Rich sits down for an interview with the Global Times in Beijing on April 8. (Photo: Global Times）

"I've never said that you can't criticize China. Never. What I always say is if you are going to say something bad about China, especially if you have a big platform, you'd better have the actual facts behind you," said Nathan Rich in an interview with the Global Times addressing the anti-China bias reinforced amid the COVID-19 outbreak.

Nathan Rich is an American political commentator currently living in Beijing. Started posting videos in 2018, Rich has now about 461,000 followers on his YouTube channel. Among the over 100 videos on his channel, the majority of them are pro-China in content. Since the outbreak, he has also made multiple videos debunking the anti-China conspiracy theories and malicious rhetoric by Western media and officials.

A report released in early April by British think-tank Henry Jackson Society said the Chinese government failed to report information to the World Health Organization (WHO), which is a breach of international health regulations and caused the outbreak to spread rapidly worldwide. Based on this report, senior Tory officials have been reportedly urged their government to seek a $449 billion compensation from China.

Meanwhile, a US lawyer Larry Klayman and his group Freedom Watch filed a class-action lawsuit against China seeking $20 trillion in compensation, based on an unsubstantiated argument claiming the Chinese government developed the virus as an "illegal biological weapon."

When something like an outbreak starts, when it happens in China, people are quiet. Yet when it becomes a problem on their doorstep, they look for someone to blame, Rich commented in response to such moves.

"Since mother nature isn't an easy person to yell at, they target at someone they can target at, which in this case is China. And for them, it's not taboo. It's not discouraged. It's not considered racist. It's not considered offensive or bad or wrong in any way to say things about China, no matter how obviously fake and false they are," he said.

Rich noted such attempts of seeking COVID-19 compensation from China were adding an insult to injury. While he doesn't see such frivolous narratives going anywhere, he criticizes it as a destructive act that would divide the nations and the world.

If such claims did go through, Rich perceived it would be a terrible precedence for the future. If anything happens, no matter it's an earthquake or an outbreak, it would just become a situation where everyone exchange blame.

"So instead of working together, it's actually slowly taking the world apart," he concluded.

As many countries are faced with medical supply shortage with the number of confirmed cases continuing to surge, millions of Chinese factory employees have been working around the clock to make the life-saving products like masks and export the products to support the global fight against COVID-19.

However, some voices from the West have been interpreting the country's aid to other countries as "mask diplomacy" to expand its influence in Europe and strengthen its global image through "propaganda."

"China went through a vacuum of no materials and no supplies. Now China has a surplus, and it's ready to distribute them as needed," he said.

The accusers living in an extremely capitalistic society attack countries for "capitalism", but they can't say that. So they are changing the wording and questioning China trading things for other reasons.

Furthermore, Rich also noted that there have been conspiracy claim that China knew the world would be needing masks, so the country stocked up all the masks across the world rather than using its own masks, so that they can sell them back.

He referred to China's extreme shortage of masks back throughout January and February, "they were asking everyone to help find supplies, and they were willing to pay for them. It's not like they were stealing them. They were paying for products."

Rich attributed such conspiracy to a smaller part of a larger narrative of the "unfair trade" concept he heard very often in the West, where people trade with a country and complain about the deal they are getting. "It's really just a negotiation tactic."

"China just needed supplies. So they paid for them and got them. And now that China doesn't need as many supplies, they can sell them. It's just a simple concept of trade," he refuted.

Delving deeper behind such accusations, Rich noted that China has been a rising power during the past few decades, which can be considered as intimidating to some countries. People lack the understanding of Chinese culture, which is distinctively different from that in the West, so they turn to media to get answers.

"When you have a culture that seems so far away from yours, it becomes very easy for companies or people to take advantage of that, and question the motivations of those people. And make their actions seem nefarious. Because you don't understand the culture, you are more likely to accept that explanation, as you simply have no other explanation," he said.