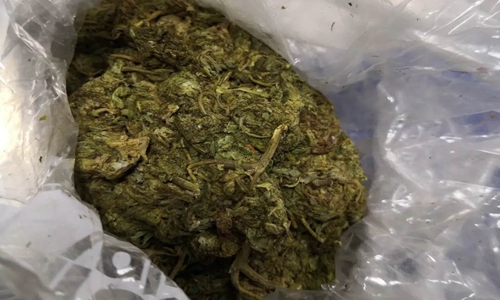 Customs officials in Wuhan, Central China's Hubei Province, on Wednesday seized a batch of US-branded dried cranberries imported from Canada, which was found to contain suspected cannabis. It's the most recent case of what appears to be a rising trend of drug trafficking from Canada into China, Chinese customs officials and experts told the Global Times.
Wuhan Customs told the Global Times on Wednesday that the suspected cannabis buds was found in three bags that also included dried cranberries. The officers' discovery was the first time in Wuhan this year the drug has been found in a parcel from an overseas location.
An employee surnamed Fan with Wuhan Customs told the Global Times that Wuhan Post Office customs officers found that an X-ray image of an incoming mail parcel named "dried cranberries" from Canada showed an abnormality.
After opening the box, the officers found that in addition to the dried cranberries, there were also three bags of vacuum-packed plant products, with a gross weight of 961 grams. These were found to be cannabis buds, the official said.
"There is more cannabis being seized in China that has come from North America, especially Canada, which legalized cannabis in October 2018," Hua Zhendong, technical director of the national narcotics laboratory under the National Narcotics Control Commission, told the Global Times on Wednesday.
Cannabis is legal in Canada but illegal in China. The cannabis buds are particularly potent compared with the other parts of the plant, Hua noted
Wuhan is not the only place that is seeing such cases.
The Global Times also learned from customs officials in Guangzhou, South China's Guangdong Province, on Wednesday that they have seized 200 grams of cannabis in a case involving concealed drugs smuggled through an express channel.
"The shipment came from Canada. It was the first time Guangzhou customs detected concealed drugs in dried fruit this year," a source with Guangzhou Customs told the Global Times, adding that the case has been handed over to the local public security department.
Cannabis smuggled from Canada has been detected by customs and public security authorities across the country in recent years, including the seizure of 580 kilograms of Canadian cannabis by the Hong Kong SAR police, marking the largest such case in the recent history of the city, Hong Kong China News Agency reported on April 15.
Other places such as Southeast China's Xiamen and South China's Nanning have also seized imported drugs from Canada this year.
The number of cases and seizure is increasing year by year, with the smuggling of cannabis from North America is rising, according to a report by the Office of China National Narcotics Control Commission in June.
In 2019, China Customs cracked 268 cases of cannabis trafficked inbound, the report said.
Under China's criminal law, whoever smuggles, traffics, transports or manufactures narcotic drugs, regardless of the quantity, shall be investigated for criminal responsibility and given criminal punishment.
The rising cases of drug trafficking from Canada to China, which have also been seen in at least one another Chinese city, came at a sensitive time as diplomatic ties between China and Canada soured over the latter's arrest of a Huawei executive at the behest of the US. Some foreign media outlets have also been smearing normal legal proceedings over Canadian citizens in drug-related cases. China has been repeatedly stressing that it has been enforcing laws reasonably.
Commenting on the deteriorating relationship at a press conference on Wednesday, Zhao Lijian, spokesperson for the Chinese Foreign Ministry, said that things between China and Canada have not come to this stage because of China.
"The Canadian side is well aware of the crux of the problem," said Zhao, noting that it should take immediate and effective measures to correct the mistakes and create conditions for bilateral relations to return to the right track.