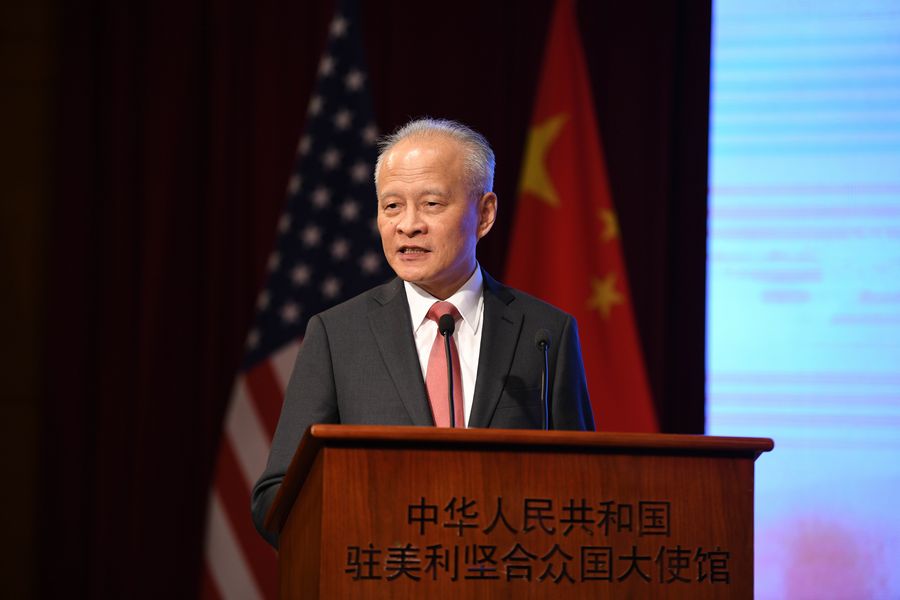 WASHINGTON, Feb. 10 (Xinhua) -- A U.S. senator's claim that the novel coronavirus is linked to biological weapons research is "absolutely crazy," Chinese Ambassador to the United States Cui Tiankai said on Sunday, warning that such an allegation could have damaging consequences.

In an interview with "Face the Nation" on CBS, Cui rebuked Republican Senator Tom Cotton's recent assertion about the origins of the novel coronavirus, saying that "there are all kinds of speculation and rumors."

"It's very harmful, it's very dangerous to stir up suspicion, rumors and spread them among the people," Cui said. "For one thing, this will create panic, and fan racial discrimination, xenophobia, all these things, that will really harm our joint efforts to combat the virus," he noted.

Cotton, an Arkansas Senator who serves on the Armed Services Committee, recently said that the coronavirus might have come from a biosafety laboratory from Wuhan, a city in central China where the outbreak of the novel coronavirus pneumonia started, an allegation which has been dismissed by numerous experts.

Cui said that China is still trying to uncover the origins of the virus. "According to some initial research, it probably comes from an animal, but we have more to discover," the ambassador said.

"I think it's true that a lot is still unknown and our scientists -- Chinese scientists, American scientists, scientists of other countries -- are doing their best to learn more about the virus," Cui said.

He welcomed American experts to participate in China's epidemic prevention and control efforts, saying that American experts are also welcomed to join the expert group assembled by the World Health Organization.

The two countries' Centers for Disease Control and Prevention (CDCs) have kept close communication, and beyond that, some U.S. experts have already come to China on their own, Cui said.