The US Navy reportedly sent a warship to the South China Sea on Saturday, only one day after a US spy plane provocatively flew over the Taiwan Straits under the close monitoring of the Chinese People's Liberation Army (PLA). Chinese experts said on Sunday that the US vessel might also stir up troubles in the South China Sea or the Taiwan Straits, yet the PLA would be ready to deal with any aggressions it could make. 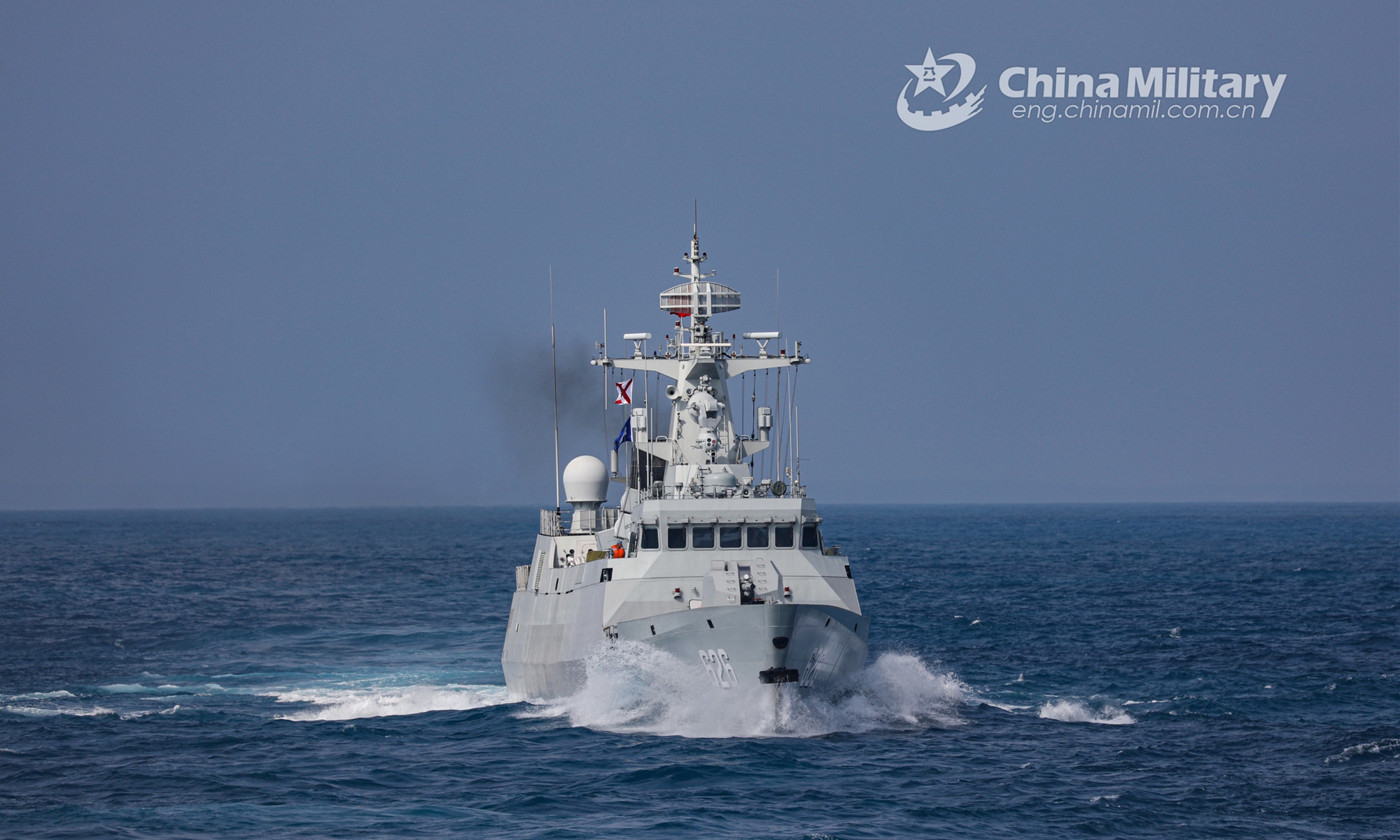 The photo taken on April 8, 2022 shows a frigate maneuvers in full speed during a combat training exercise somewhere in the South China Sea staged by a frigate flotilla with the navy under the PLA Southern Theatre Command in early April, 2022.Photo:eng.chinamil.com.cn

The USS Benfold is a habitual offender in the South China Sea and the Taiwan Straits, observers noted. For example, in January 2022, the destroyer illegally entered the Chinese territorial waters off the Xisha Islands in the South China Sea without authorization from the Chinese government, leading the PLA Southern Theater Command to organized naval and air forces to track, monitor and warn it away. In July 2021, it transited the Taiwan Straits, with the PLA Eastern Theater Command tracking and monitoring it through its entire course.

The US warship's Saturday entry to the South China Sea came only one day after the US sent a P-8A anti-submarine aircraft which flew over the Taiwan Straits on Friday, when the PLA Eastern Theater Command organized aerial and ground forces and tracked and monitored its movement throughout its entire course on high alert.

Also, based on past experience, it is noticed that the US provocatively sends warships through the Taiwan Straits on a monthly basis, but it has seemingly not sent one warship in June as of yet, and instead sent a military aircraft.

Recent US military activities in the region attracted attention from media particularly because Chinese Foreign Ministry spokesperson Wang Wenbin made clear earlier this month that there is no such thing as "international waters" on the United Nations Convention on the Law of the Sea, and that China has sovereignty, sovereign rights and jurisdiction over the Taiwan Straits.

Over the past week, the PLA reportedly held large-scale military drills around the island of Taiwan, sending dozens of warplanes, including fighter jets, bombers and early warning aircraft, and a number of warships, including destroyers and frigates, to the southwest and east of the island of Taiwan, and east and south to Japan in an apparent response to recent repeated provocations by the "Taiwan independence" secessionists and US, Japanese interference forces.

It is possible that US warships would attempt to trespass into Chinese territorial waters in the South China Sea again, or transit the Taiwan Straits to provocatively challenge China's stance over its rights in the region, Song Zhongping, a Chinese military expert and TV commentator, told the Global Times on Sunday.

The PLA has a series of contingency plans to counter activities by US warships and warplanes in the South China Sea and the Taiwan Straits, Song said.

The US should not take the PLA's restraint as weakness, as the PLA will take resolute measures to counter any threat that endangers China's sovereignty and security, Song said.