CHINA US should reconsider view on El Salvador's ties with China: MOFA

US should reconsider view on El Salvador's ties with China: MOFA 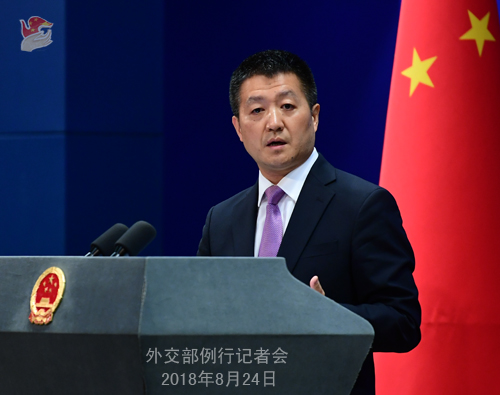 China has called on the US to reassess its stance regarding the establishment of diplomatic relations between China and El Salvador, after Washington criticized the Central American nation's decision.

El Salvador established diplomatic relations with China on the basis of the one-China principle, which is indisputable and fair, spokesperson for China's Ministry of Foreign Affairs Lu Kang said on Friday.

"We urge the United States to view correctly the establishment of diplomatic relations between China and El Salvador."

Beijing and San Salvador signed a joint communique on Tuesday on the establishment of diplomatic relations.

"We should instead be asking ourselves why we didn't do it sooner. How much has El Salvador lost by not having a relationship with an economic giant like China," Salvadoran President Salvador Sanchez Ceren's press secretary Roberto Lorenzana was cited by Xinhua as saying.

The United States rebuked El Salvador's decision, and threatened to review its own ties with the country.

"The US is deeply concerned about the El Salvador's acceptance of China's interference in the internal affairs of countries in the Western hemisphere and will reassess US-El Salvador relations," the White House said in a statement.

Lu said El Salvador stands together with the United Nations and 177 other countries to recognize the one-China principle and establish diplomatic ties with China, conforming to history and international law.

"This conforms to international law and basic norms governing international relations, and accords with the fundamental interests of the two countries and peoples," he stressed.

Latin America and the Caribbean regions are an independent and growing force in the world and economic globalization, he noted.

"We urge the US to respect the rights of other countries to independently decide internal and external affairs and stop the hegemonic attempts," the spokesman added.