US should stop political manipulation, interfering in other's affairs: MFA

China firmly opposes the US engaging in political manipulation, urging the country to put aside the zero-sum thinking of the Cold War and ideological bias, Ministry of Foreign Affairs spokesperson Zhao Lijian said on Tuesday. 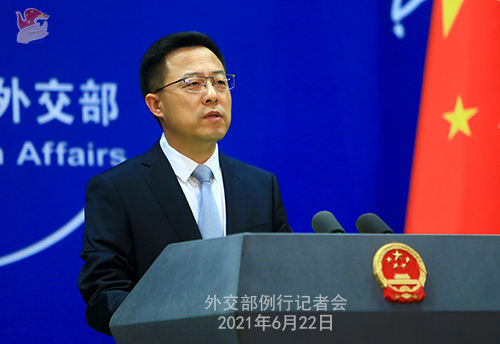 Zhao made the remarks at a regular press briefing in response to news that FBI agent admitted to having falsely accused a Chinese American professor.

Recently, an FBI agent admitted in an ongoing trial to falsely accusing the Chinese-born professor Hu Anming of being a Chinese spy, using baseless information to have him placed on the federal no-fly list and spying on him and his son for two years, according to US media reports.

US media say the case is part of the “China Initiative” of the US Department of Justice, and several federal lawmakers have called for an investigation into US intelligence misconduct in the case.

“For a long time, US intelligence agencies always do whatever it takes to achieve specific political purposes, from which its credibility badly suffered.” Former Secretary of State Mike Pompeo’s famous words “We lied, we cheated, we stole” is the evidence, Zhao noted.

The United States has used a tube of suspected “laundry detergent” as evidence to accuse Iraq of harboring “weapons of mass destruction”; it has sent spies disguised as staff of the UN Hepatitis B vaccine program to collect DNA from the Pakistani people; the US has engaged in mass monitoring and stealing secrets, even from their European allies; it has also bribed media and institutions through the “Mockingbird Project” and used various means to bribe and manipulate journalists from other countries to serve as spies.

Zhao Lijian stressed that the US should put aside the zero-sum thinking of the Cold War and ideological bias, stop engaging in political manipulation, and stop interfering with normal exchanges and cooperation between China and the US in science and technology, humanities, and other fields.