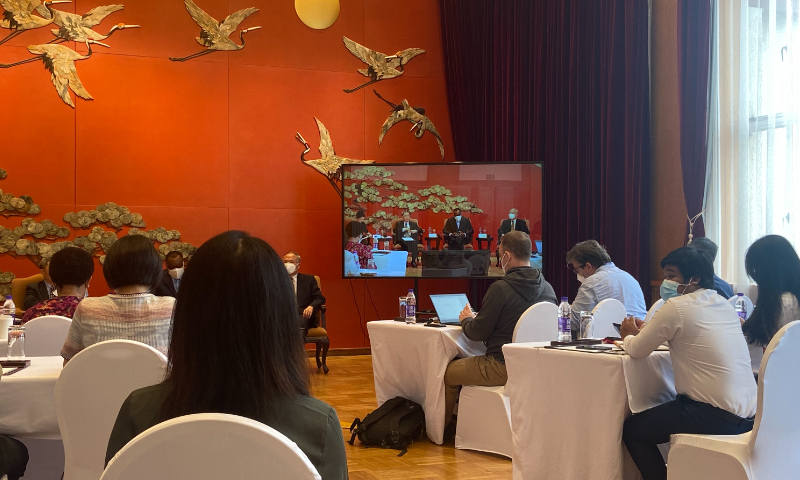 Diplomats, experts and journalists participate in a teleconference on the BRICS on Monday in Beijing. （Photo: GT）

"I hope the United States can take a serious look at the Global Security Initiative (GSI) that China proposed as it is an important player in world security and the GSI ushers in new elements to uphold global peace," said Li Kexin, Director-General of the Department of International Economic Affairs of China's Foreign Ministry, during a teleconference on the BRICS cohosted by the China Public Diplomacy Association on Monday afternoon. The event attracted diplomats, experts and journalists from many countries.

"I hope that that US can take a look at this initiative very seriously because they do have a very strong state for the world security. We'd like to see that China, with other major countries including the US, can work together to push, develop and materialize important GSI together," Li said.

China's State Councilor and Foreign Minister, Wang Yi, told media on Friday after a series of BRICS meetings that, for some time now, the Cold War mentality and bloc politics have been on the rise. Traditional and non-traditional security threats have emerged one after another and some countries are seeking to expand their military alliances in pursuit of absolute security, coerce others to take sides and create confrontation, and disregard other countries' rights and national interests. International instability, uncertainty and insecurity are on the rise and the world faces a real risk of division and confrontation.

Li noted that security is a major cooperation area of the BRICS. At this year's meetings, the Ukraine crisis, hot issues in the Middle East, counter-terrorism and other security issues were discussed.

Li remarked that important principles like non-interference in international affairs, rejecting Cold War mentality and upholding the principle of indivisible security, among many others in the GSI, reflect a comprehensive thinking about the new development and collective ideas to address security issues in the world.

When asked about the issue of inflation that is troubling numerous countries, Li said the BRICS countries discussed this important issue in addition to measures including macro-policy coordination to address it.

The XIV BRICS Summit Beijing Declaration made a "call upon the international community to foster partnerships while underlining that it is imperative to strengthen macro-policy coordination in driving the world economy out of the crisis and shaping a strong, sustainable, balanced and inclusive post-pandemic economic recovery. We urge major developed countries to adopt responsible economic policies, while managing policy spillovers, to avoid severe impacts on developing countries."

According to Li, inflation is a systematic issue and there is no single reason for it, citing the quantitative easing one or two years ago as one reason.

At the same time, the Ukraine crisis triggered unilateral sanctions which made commodity prices soar this year, Li said adding that "this also gave a huge push to the inflation."

A report by Reuters on June 17 said that Euro zone inflation rose to a record high 8.1 percent last month in line with a preliminary estimate, more than four times the European Central Bank's target. It pointed out that inflation has now become "increasingly broad, affecting everything from food and services to everyday goods."

At the end of May, the EU decided to ban 90 percent of all oil imports from Russia by the end of the year, part of a wider array of sanctions which further escalates already exorbitant energy prices.

Li noted that another element is the high tariffs imposed by some countries which also give strong push to inflation.

He said that it is important for some countries to change their current policies, geopolitically and economically, to address the systematic issue of inflation.

According to Li, the discussions related to the expansion of the BRICS also made positive progress. Argentina's Ambassador to China, Sabino Vaca Narvaja, previously told the Global Times that "the BRICS cooperation mechanism is of great significance for the building of a new, more multipolar and balanced world."

"We are interested in joining the BRICS because it is a cooperation mechanism composed entirely of emerging economies. There are no strings attached and all cooperation is mutually beneficial," Vaca said.