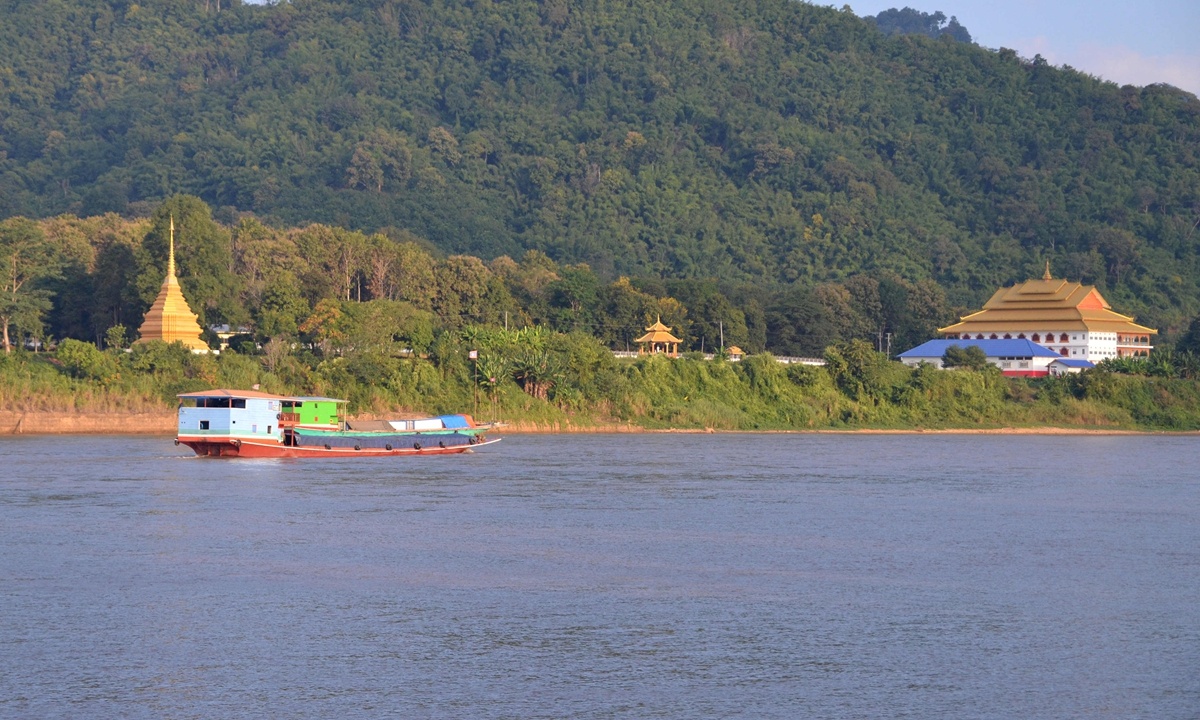 A cargo ship passes in front of a Buddhist temple in Myanmar on the Mekong River on November 20, 2019. (Photo: cnsphoto)

US intervention in the Mekong River water resource issues is found to be an attempt to contain China in the region under the pretext of a presumed Chinese dam threat based on weak evidence and sources from ill-intentioned US-backed institutions.

The US bluntly targeted China by accusing it of causing droughts in the region, and in a recent tweet the US Embassy in Beijing even claimed that China encourages drug and weapons trafficking in the region, which experts say is not worth refuting.

The Mekong River which flows through Southeast Asian countries is called Lancang River in China, where it originates.

Chinese Foreign Ministry has repeatedly slammed the US for hyping issues of the Mekong River water resources that was aimed to sow discord between Mekong regional countries, after David Stilwell, the assistant secretary of state for East Asia and the Pacific, claimed China was manipulating water to fill its reservoirs, which US-funded "Eyes on Earth" says have a combined capacity of more than 47 billion cubic meters.

"We advise US diplomats to be cautious about citing such a report that many global hydrological experts say is faulty and has little scientific value," Foreign Ministry Spokesperson Zhao Lijian said.

Chinese experts carefully evaluated a report by US climate observers Alan Basist and Claude Williams, and found that research models used in their report had obvious errors and loopholes, resulting in unreliable and misleading results.

The Global Times founds that the report, called Monitoring the Quantity of Water Flowing Through the Upper Mekong Basin Under Natural (Unimpeded) Conditions, written by Basist and Williams, former and present US government employees, was not compiled by any authorized academic institution, and was not published by any official or peer-reviewed publication.

A detailed assessment of the report by Chinese hydraulic experts pointed out apparent errors. Tian Fuqiang, a Chinese leading scholar and researcher on Mekong River water resources from Tsinghua University, told the Global Times in a previous interview that the water level of hydropower stations along the Lancang River is not necessarily related to humidity of the basin. Therefore, estimating the flow rate of hydropower stations on Lancang River using humidity index will draw the conclusion that is far from accurate.

Moreover, the model Basist used for detecting moisture, the Basist Wetness Index (BWI), is not applicable for studying surface moisture in a forest-covered mountain region such as the Lancang River basin, as Basist himself has mentioned in previous academic papers.

There are more than 300 hydropower stations along the Mekong River; China has only built 11 hydropower stations along the Lancang River based on scientific assessment. The stations have played an important role in the sustainable economic and social development of riparian countries, Chinese Foreign Ministry Spokesperson Wang Wenbin said at a regular press conference on Wednesday.

"Moreover, the runoff of the Lancang River only accounts for 13.5 percent of the total water volume of the Mekong River, which means it has a very limited impact on the river's overall water volume," Wang said. "Relevant personnel from the US should strengthen their study rather than making ridiculous remarks that run counter to scientific conclusions and common sense."

The authors of the report used materials and sources from the early 1990s to build their research and analytical model, which are unlikely applicable to the current global environment and climate changes, Tian said in his evaluation. 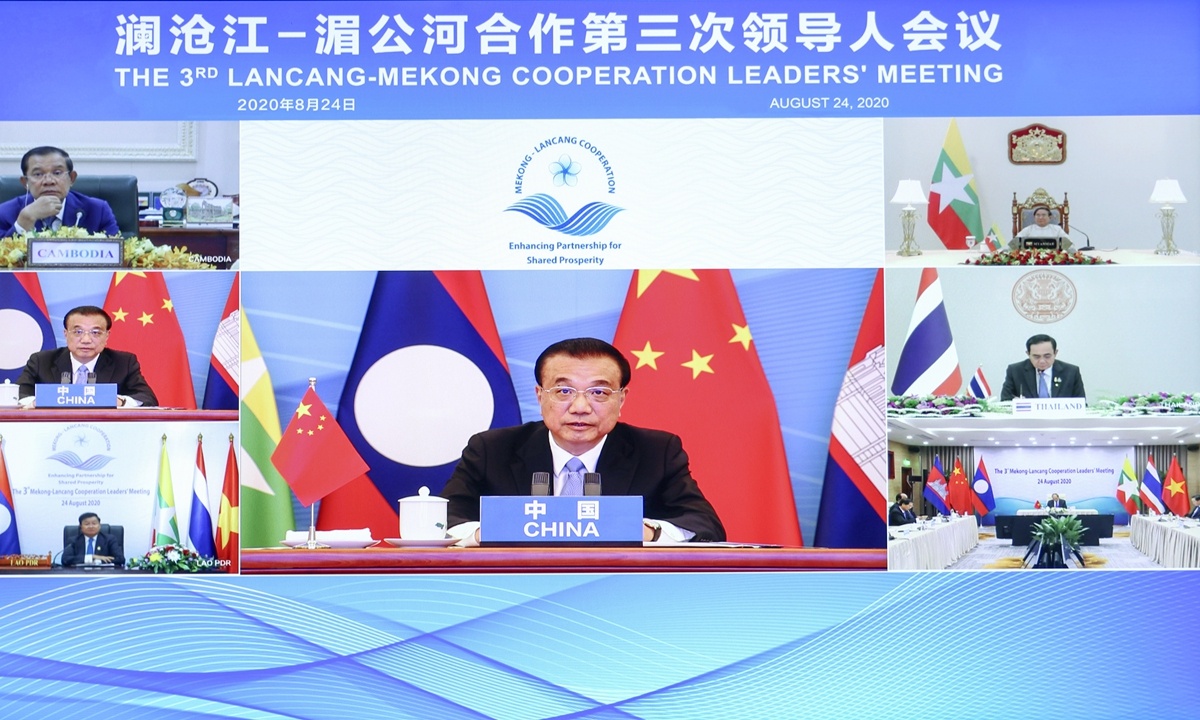 Despite not being in the region, the US has ramped up efforts attacking the Lancang-Meking River Cooperation (LMC) mechanism promoted by China since 2016. US politicization on the water resource issue has continued to escalate with some media hyping it as "the second South China Sea dispute."

Stimson Center Southeast Asia, another Washington-based think tank, has been persistent critics of Mekong River resource management in recent years. The think tank's program director Brian Eyler repeatedly lambasted China and provoked relations between China and countries in the region in media interviews, including one with Reuters on September 4 saying: "Giving China a major stake in the 'Battery of Southeast Asia Plan' puts Laos fast on the track of becoming a pseudo-province of China."

Eyler on August 15 retweeted a post by US Secretary of State Mike Pompeo which accused China of "manipulating flows in a non-transparent manner," which experts said deliberately ignored China's long-term pledge and efforts in sharing data with downstream countries.

The Mekong River Commission (MRC), an inter-governmental river basin organization established by the riparian countries, welcomed the pledge made by Chinese Premier Li Keqiang on August 24 that China will share year-round hydrological data with the Mekong countries. The pledge is expected to help uphold mutual trust and rebut outside accusations against China.

Funded by US Agency for International Development (USAID), a federal government organ that promotes US foreign policies, the Stimson Center established a platform for multi-field research in the Mekong River Basin.

From the end of the 20th century to 2015, the US, Japan, Australia and other countries outside the region have been involved in Mekong River water issues. But since the launch of the LMC mechanism in 2016, non-regional forces have become more ambitious about getting involved in the Mekong region in a more low-cost way, Zhang Li, a researcher on Water Diplomacy and Mekong River region from Fudan University, told the Global Times, adding that spreading rumors is believed to be a low-cost way.

On the sidelines of the ASEAN Foreign Ministers' Meetings in August 2019, Pompeo accused China of "shut[ting] off water upstream" and "to govern the river."

The US has even blamed China for dam breaks that China was not involved in. In July 2018, a dam contracted by a South Korean company in Laos burst, resulting in many casualties. China promptly dispatched a rescue team after the accident.

The US took the opportunity to bash China for building dams upstream that it said destroy the local ecological balance, Zhang said.

The biggest obstacle to the future upgrading of China-ASEAN relations might be interference from outside forces, Peng Nian, a scholar at China's National Institute for South China Sea Studies, said in an opinion piece previously published on the Global Times.

The Mekong River countries were long neglected by the US in the past due to their smaller economies. But now attacks by US politicians signal US willingness to compete for clout and influence in the region, Peng said.