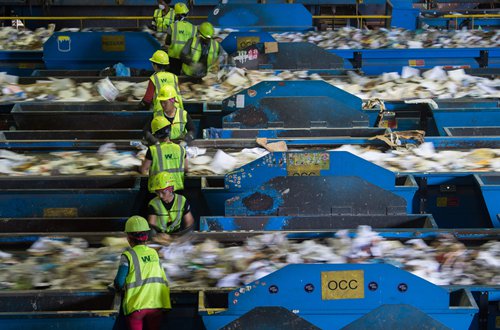 About 900 tons of trash are dumped at all hours of the day and night, five days a week, on the conveyor belts. (Photo: VCG)

For months, a major recycling facility for the greater Baltimore-Washington area has been facing a big problem: It has to pay to get rid of huge amounts of paper and plastic it would normally sell to China. Amid the nerve-shattering din and clouds of brown dust, dozens of workers in gloves and masks - most of them women - nimbly pluck a diverse array of objects from the piles that could count as "contaminants." That could be anything from clothes to cables to tree branches to the bane of all recyclers: plastic bags, which are not supposed to go in recycling bins because they snarl up the machinery."We've had to slow our machinery, and hire more people" to clean up the waste, says Michael Taylor, the head of recycling operations for Waste Management, the company that runs the plant in Elkridge, Maryland.The waste has been bought for decades by businesses, most of them based in China, which clean it up, crush it and transform it into raw materials for industrial plants.Last year, China bought more than half of the scrap materials exported by the US. Globally, since 1992, 72 percent of plastic waste has ended up in Chinese mainland and Hong Kong, according to a study in the journal Science Advances.But since January, China closed its borders to most paper and plastic waste in line with a new environmental policy pushed by Beijing, which no longer wants to be the world's trash can. For other waste products, such as cardboard and metal, China has set a contamination level of 0.5 percent - a threshold too low for most current US technology to handle.US waste handlers say they expect China will close its doors to all recycled materials by 2020 - an impossibly short deadline.Some US recycling plants have broken a major taboo and no longer bother sorting plastic and paper, and instead simply send it straight to landfills.The US capital already pays $75 a ton for recycling, compared to $46 for waste that is burned to generate electricity.Du Huanzheng, a recycling economy expert at Chinese Academy of Social Sciences, told the 21st Century Business Herald that there are already many Chinese and US companies that are building recycling plants in the US to fill the gap left by China.He said that as the US rebuilds its waste recycling system, the country will gradually be more able to handle its own waste.