CHINA US' strong sense of insecurity beyond comprehension: FM

US' strong sense of insecurity beyond comprehension: FM 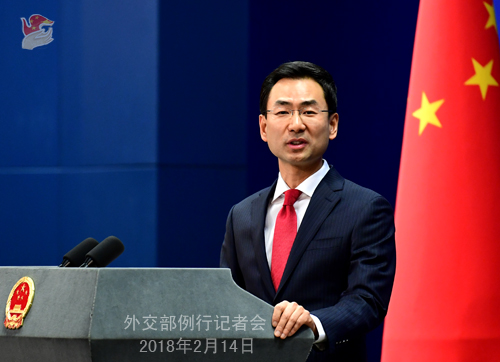 China's foreign ministry spokesperson said the United States has a strong sense of insecurity which is beyond comprehension, in response to latest accusations from US National Intelligence Daniel Coats that the US is confronted with multiple threats from China.

"I don't know why the United States has such a strong sense of insecurity," said foreign ministry spokesperson Geng Shuang at a press conference on Wednesday, adding that there is no such thing as the absolute security under the sun, and one country's security cannot be achieved at the expense of other countries' security.

Director of US National Intelligence Daniel Coats said at a Senate Intelligence Committee hearing on Tuesday that the US is confronted with multiple threats posed by countries like Russia and China, including the Iranian nuclear issue, the Korean Peninsula nuclear issue, cyber threat, espionage, and weaponization of outer space.

Geng asked the United States to discard the "zero-sum game" mindset, refrain from viewing the relations between major countries from a confrontational perspective, correspond with the trend of the times, namely, peace and development, and make concerted efforts with China, Russia and other members of the international community to jointly uphold world peace and security.

"The United States is the No.1 major power in the world with unparallel military might. If the United States felt that it was threatened hither and thither, what would other countries do? Shouldn't they feel that the danger just lurked at the doorstep? How could they even survive in that case?" Geng retorted.

Complaints against China over security have gained steam recently. FBI Director Christopher Wray told the Senate Intelligence Committee Tuesday that China has aggressively placed spies at US universities. Last week, senator Marco Rubio of Florida wrote to five Florida institutions and asked them to shut down their joint programs with China's Confucius Institute.