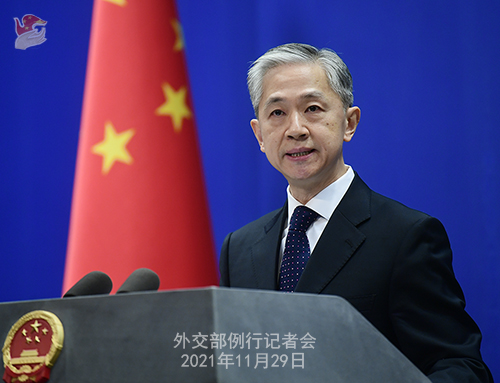 The United States' hosting of the "Summit for Democracy" is a dangerous move to rekindle the Cold-War mentality, to which the international community should be on high alert, a Chinese Foreign Ministry spokesman said on Monday.

Spokesman Wang Wenbin made the remarks at a daily press briefing when responding to a question regarding the increasing criticism around the world of the so-called "Summit for Democracy."

There has been a crescendo of criticism around the world of the so-called "Summit for Democracy" to be hosted by the United States, which shows that the international community questions and opposes the US move.

Wang said that the US democracy is in a disastrous state, citing a survey showing that 44 percent of respondents see the US as the biggest threat to global democracy, while 81 percent of Americans say there is a serious domestic threat to the future of US democracy.

"Its hosting of the 'Summit for Democracy' is neither justified nor legitimate, but merely an old trick of trying to shift its domestic problems overseas in an attempt to find a cure," he said.

Wang said the United States is determining which countries are democratic and which are not based on its own likes and dislikes. "It is measuring the merits of other countries' democracy with its own yardstick. This is privatization of democracy. It is a betrayal of the democratic spirit. Nothing could be more undemocratic."

"The United States is using democracy as a banner to divide the world into opposing camps. Its true intention lies underneath the surface. It is trying to weaponize democracy and use it as a tool to advance its geostrategic agenda. It is advancing its hegemony under the guise of democracy," he said.

This year marks the 30th anniversary of the end of the Cold War. The US hosting of the "Summit for Democracy" is a dangerous move to rekindle the Cold-War mentality, to which the international community should be on high alert, Wang said.

"We call on visionary people in all sectors to jointly reject anti-democratic and pseudo-democratic acts to safeguard international solidarity and cooperation and advance world peace and development," Wang said.