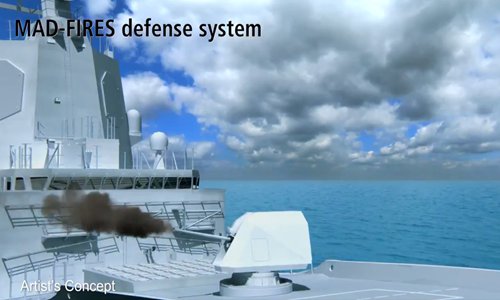 US missile maker Raytheon Co. provoked China with a promotional video in which the company showcases new defense technologies to defeat enemy missiles and other threats including China-made missiles. Chinese experts said that showed the US was targeting China as its major opponent and was likely to lead to a boycott by Chinese buyers.

Developed jointly with the US Defense Advanced Research Projects Agency, the company's MAD-FIRES interceptor looks effective in the video released through the company's Twitter account on Tuesday.

The video shows the weapons stopping missiles from a warship similar to China's Type 052C destroyer and an aircraft like the H-6K bomber.

Observers noted the enemy submarine in the video looks similar to Russian-made Kilo-class submarines, which have been purchased by China.

Raytheon Co sells weapons to the island of Taiwan and is likely to be sanctioned by China due to their barefaced action of depicting China as its target and toadying to the Pentagon, Chinese experts said.

"Although it looks like marketing behavior, considering the convention of the US military industry, such a move shows that the US is unveiling its idea of targeting China as its major rival," a Chinese expert told the Global Times on Wednesday. He requested anonymity.

"The video would certainly cause resentment among Chinese people, which means the company is no longer doing business in China," he said.

The Chinese observers noted that since the Cold War, US arms companies have usually used Russian military equipment as the imaginary enemy in promotional videos.

For instance, in a video of Lockheed Martin's Long Range Anti-Ship Missile, the company targeted a Russia cruiser.

According to online military magazine defence-blog.com, MAD-FIRES can "provide an affordable, advanced technology to the fleet" and "take out a rapidly approaching target," as demanded by the US Navy.

Chinese experts said that it remained unconfirmed whether the weapon was as effective as advertised.

"MAD-FIRES is a kind of small artillery missile, or guidance shell. Due to its limited range, it will be used as a supplement," the anonymous expert said.

"Because of its small warhead and relatively simple guidance system, the kill probability of a single shot is not too high, requiring multiple continuous shots."

Chinese mainland experts also all mentioned that the main problem for MAD-FIRES was how to balance its launch cost and performance.