CHINA US tariffs on Chinese art could backfire

US tariffs on Chinese art could backfire 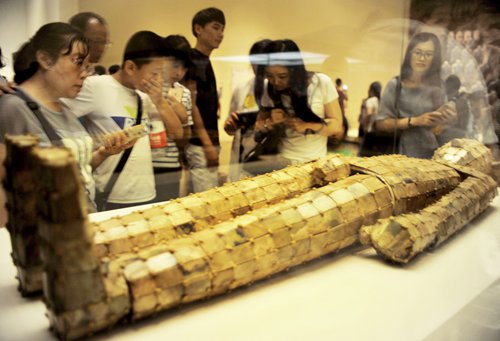 Visitors look at an old sculpture at the National Museum of China in Beijing on Saturday. (Photo: VCG)

Proposed US tariffs on imported Chinese art, collectibles and antiques could backfire and may help boost the Chinese domestic market instead of helping the US to address its trade deficit with China, as such exports to the US are small in both volume and value terms, industry insiders said.

The move reflected a reality where the US government is running out of targets for duties on items that could potentially reduce its trade deficit with China, they also noted.

"Chinese artwork such as traditional Chinese painting, calligraphy and Suzhou embroidery only account for a negligible share in the US market, and they are not the mainstream in the West… so the impact on the Chinese industry is very limited," Xu Xiaoling, the general-secretary of the Shanghai Antique Management Association, told the Global Times in an interview over the weekend.

The US announced in June a list of $200 billion worth of Chinese imports that would be subject to 10 percent tariffs. Among the thousands of items were such items as paintings, sculptures, collages, ceramics and historical collections, along with antiques older than 100 years.

Public hearings on the list are to be held in late August, with the tariffs to take effect at some time after that, according to a statement on the website of the Office of the United States Trade Representative.

Chinese law prohibits the export of most antiques. Last year, exports of antiques and artwork to the US stood at just over $280 million, representing 2.7 percent of total US imports in this category, according to various media reports.

Xu also stressed that the tariff, on the contrary, would spur the growth of China's burgeoning art market. "If the US administration is using tariffs to contain the domestic industry, the results would be opposite to its expectations. Chinese artists will then focus more on improving the quality of their work and exploring European markets," Xu said.

Wu Fei, president of the New York-based China-US Cultural Exchange Center, told the Global Times over the weekend that even if the tariff takes effect, it won't make much difference in the prices of these items she sells.

"Contemporary Chinese artwork isn't expensive - prices range from tens of dollars to hundreds of dollars. So imposing a 10 percent or even a 25 percent tariff won't drive up the price too much. It is not a big deal," she explained. As such, the inclusion of art and antiques in the US tariff list has more "symbolic meaning" than actual meaning, Wu added.

Industry insiders highlighted the principle of free international movement of art, and they questioned the US for targeting art and breaking long-term industry traditions.

In sharp contrast to the US decision, the State Council, China's cabinet, cut tariffs on art, collectibles and antiques in July by as much as 8 percentage points to current levels  between 1 t0 6 percent.

"Cultural communication between China and the US has sped up in recent years, and an increasing number of Chinese artists have held exhibitions in the US," Xu said, adding that "if the trade row between China and the US escalates, I'm worried that the US will deliberately create barriers to Sino-US cultural exchange, such as delaying the visa approval of Chinese artists."

More importantly, the proposed tariff reflects that the US administration is having a hard time making a list of targets and has to include things that play a minimal role in reducing its trade deficit with China.

"Is it meaningful to tax art and unilaterally pursue balanced trade with China? The US really needs to think about it," Xu noted