CHINA US the loser from Trump’s nonsensical policies

US the loser from Trump’s nonsensical policies 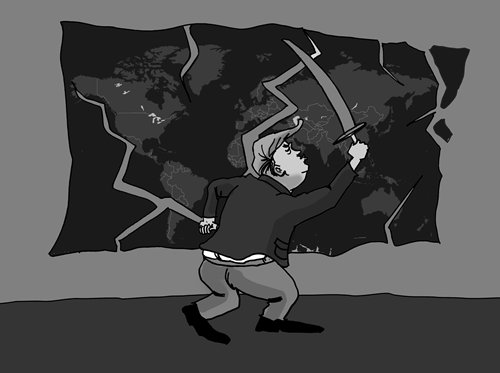 The Washington Post's Catherine Rampell recently recalled that when US President Donald Trump held a session for Harley-Davidson executives and union representatives at the White House in February 2017, he thanked them "for building things in America." Trump went on to predict that the iconic American motorcycle company would expand under his watch. "I know your business is now doing very well," he observed, "and there's a lot of spirit right now in the country that you weren't having so much in the last number of months that you have right now."

What a difference a year makes. Harley-Davidson recently announced that it would move some of its operations to jurisdictions not subject to the EU's retaliatory measures adopted in response to Trump's tariffs on imported steel and aluminum.

Trump then took to Twitter to say that he was "surprised that Harley-Davidson, of all companies, would be the first to wave the white flag." He then made a promise that he cannot keep: "… ultimately they will not pay tariffs selling into the EU." Then, in a later tweet, Trump falsely stated that, "Early this year Harley-Davidson said they would move much of their plant operations in Kansas City to Thailand," and that "they were just using tariffs/trade war as an excuse." In fact, when the company announced the closure of its plant in Kansas City, Missouri, it said that it would move those operations to York, Pennsylvania.

At any rate, Trump's point is nonsensical. If companies are acting in anticipation of his own announcement that he is launching a trade war, then his trade war is not just an excuse.

In yet another tweet, Trump turned to threats: "Harley must know that they won't be able to sell back into US without paying a big tax!" But, again, this is nonsensical: The entire point of Harley-Davidson shifting some of its production to countries not subject to EU tariffs is to sell tariff-free motorcycles to Europeans.

In a final tweet, Trump decreed that, "A Harley-Davidson should never be built in another country - never!" He then went on to promise the destruction of the company, and thus the jobs of its workers: "If

they move, watch, it will be the beginning of the end - they surrendered, they quit! The aura will be gone and they will be taxed like never before!"

Needless to say, none of this is normal. Trump's statements are dripping with contempt for the rule of law. And none of them rises to the level of anything that could be called trade policy, let alone governance. It is as if we have returned to the days of Henry VIII, an impulsive, deranged monarch who was surrounded by a gaggle of plutocrats, lickspittles and flatterers, all trying to advance their careers while keeping the ship of state afloat.

Trump is clearly incapable of executing the duties of his office in good faith. The US House of Representatives and Senate should have impeached him and removed him from office already - for violations of the US Constitution's emoluments clause, if nothing else. Barring that, Vice President Mike Pence should have long ago invoked the 25th Amendment, which provides for the removal of a president whom a majority of the cabinet has deemed "unable to discharge the powers and duties of his office."

And yet, neither Speaker of the House Paul Ryan nor Senate Majority Leader Mitch McConnell nor Pence has dared to do anything about Trump's assault on American democracy. Republicans are paralyzed by the fear that if they turn on Trump, who is now supported by roughly 90 percent of their party's base, they will all suffer at the polls in the midterm congressional election this November.

It is nice to think that the election will fix everything. But, at a minimum, the Democratic Party needs a six-percentage-point edge to retake the House of Representatives, owing to Republican gerrymandering of congressional districts. Democrats also have to overcome a gerrymandering effect in the Senate.

Moreover, the US is notorious for its low voter turnout during midterm elections, which tends to hurt Democratic candidates' prospects. And Trump and congressional Republicans have been presiding over a relatively strong economy, which they inherited from former president Barack Obama, but are happy to claim as their own.

Finally, one must not discount the fear factor. Countless Americans routinely fall victim to social- and cable-media advertising campaigns that play to their worst instincts. You can rest assured that in this election cycle, as in the past, elderly white voters will be fed a steady diet of bombast about the threat posed by immigrants, people of color, Muslims and other Trump-voter bugaboos (that is, when they aren't being sold fake diabetes cures and overpriced gold funds).

Regardless of what happens this November, it is already clear that the American century ended on November 8, 2016. On that day, the US ceased to be the world's leading superpower - the flawed but ultimately well-meaning guarantor of peace, prosperity, and human rights around the world. America's days of Kindlebergian hegemony are now behind it. The credibility that has been lost to the Trumpists can never be regained.