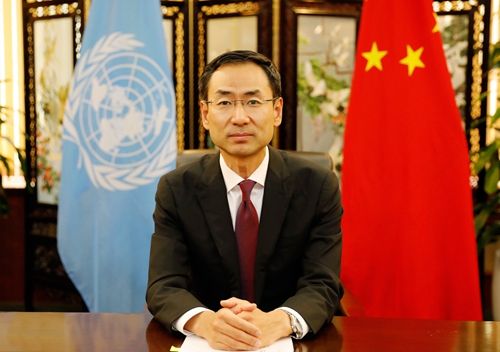 UNITED NATIONS, Oct. 2 (Xinhua) -- A Chinese envoy said Friday that the United States is threatening the nuclear disarmament process, the peace and well-being of the United Nations (UN) member states, and global strategic balance and stability.

Currently, the biggest threat and challenge to this process are the Cold War mentality, unilateralism, and bullying practices, Geng Shuang, China's deputy permanent representative to the UN, said at a high-level UN meeting to mark the International Day for the Total Elimination of Nuclear Weapons.

For the past years, the United States has been advocating American exceptionalism and "America First," pushing for modernization of its nuclear arsenal, and lowering the threshold of using nuclear weapons, he said.

The United States has unilaterally withdrawn from the Intermediate-Range Nuclear Forces Treaty, and tried to evade its special responsibility in nuclear disarmament by trumpeting "trilateral talks," he added.

The United States is imposing unilateral sanctions and exerting maximum pressure over the Iranian and Korean Peninsular nuclear issues to advance its own geopolitical agenda, he stressed, adding such behavior runs counter to the goal of a nuclear-weapon-free world and the common interests of the international community.

Noting that 36 years ago, then U.S. President Ronald Reagan said, "A nuclear war cannot be won and must never be fought," Geng said China hopes his words will never be forgotten, and that China is ready to work with the international community to advance the nuclear disarmament process against all disruptions and difficulties, and work for the ultimate realization of a nuclear-weapons-free world.

China calls on other nuclear-weapon states to make similar commitments and conclude a legally binding instrument in this area, he added.

The international community should take the 75th anniversary of the UN to push forward the nuclear disarmament process in a reasonable, pragmatic and step-by-step manner for the ultimate realization of a nuclear-weapons-free world, he said.