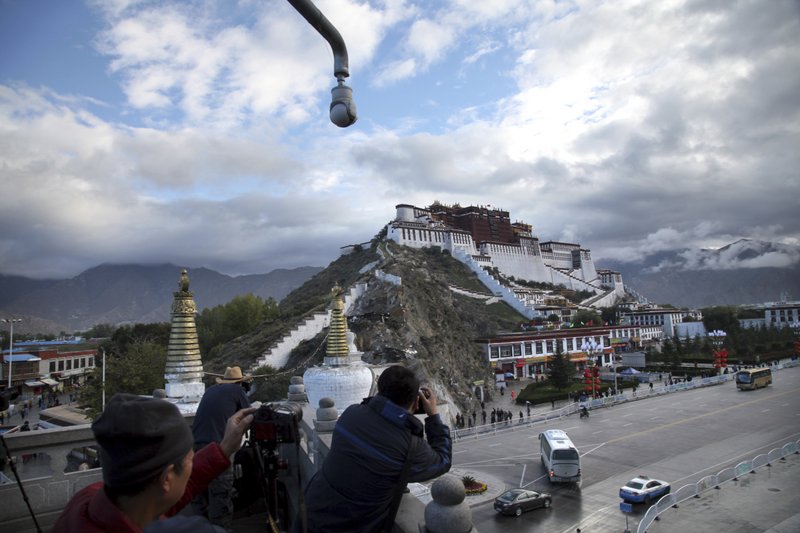 Tourists take photos of the Potala Palace beneath a security camera in Lhasa, capital of the Tibet Autonomous Region of China. (File photo: AP)

Spokesperson Geng Shuang made the remarks in response to a query about Sam Brownback, the US ambassador at large for international religious freedom, recently meeting with the Dalai Lama in India and his words about picking a successor to the Dalai Lama.

Pointing out that the 14th Dalai Lama is a political exile under the cloak of religion who has long been engaging in anti-China separatist activities, Geng said China resolutely opposes any form of contact between any foreign official and the Dalai Lama.

"Relevant words and deeds of the US official violated the US commitment to recognize Tibet as part of China and to not support 'Tibetan independence.' China is firmly opposed to this move," Geng told a press briefing.

"The institution of the reincarnation of the Dalai Lama has been in existence for several hundred years. The 14th Dalai Lama himself was found and recognized following religious rituals and historical conventions and his succession was approved by the then central government. Therefore the reincarnation of living Buddhas including the Dalai Lama must comply with Chinese laws and regulations and follow religious rituals and historical conventions," said the spokesperson.

"We strongly urge the US side to stop any form of contact with the Dalai clique, stop making irresponsible remarks, stop using Tibet-related issues to interfere in China's internal affairs, and do more to advance China-US mutual trust and cooperation," he added.