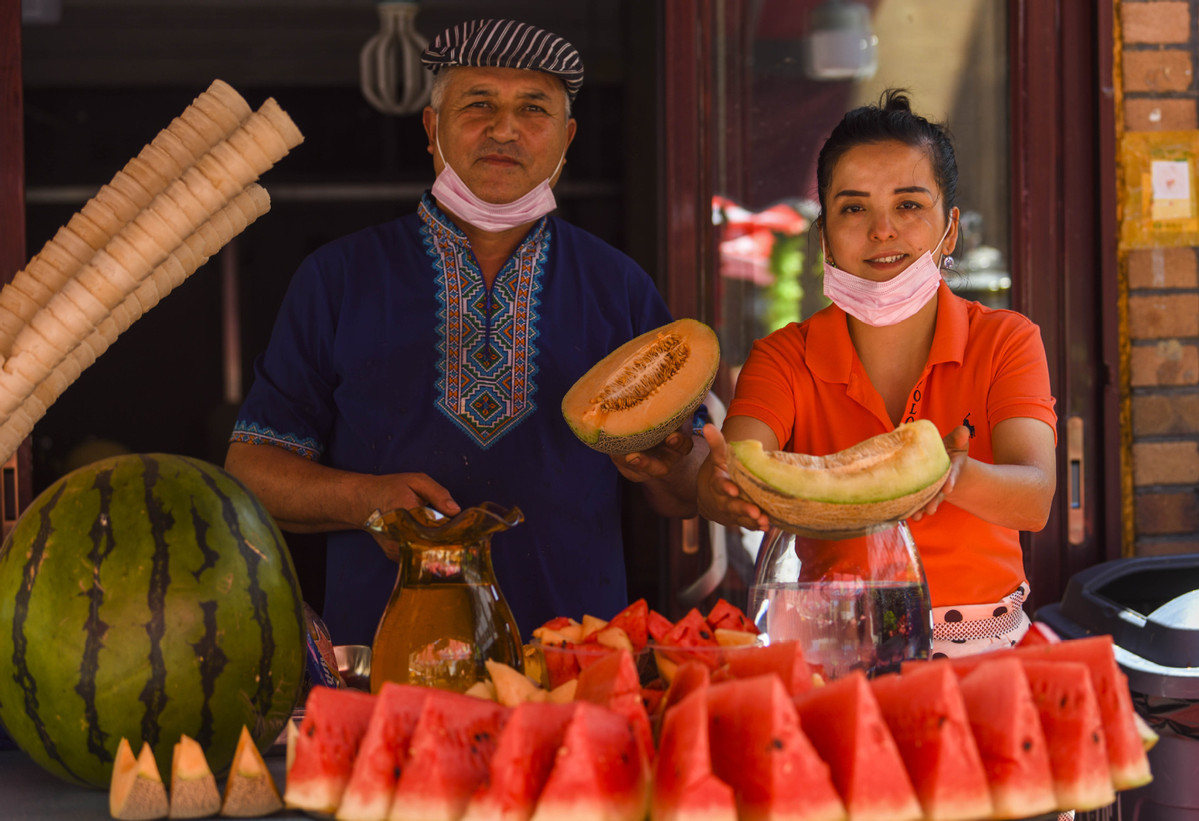 URUMQI－Growing up, Khadir Emer was warned by his father, a businessman in northwestern China's Xinjiang Uygur autonomous region, not to sell melons, a popular local fruit. Yet, now at 42, he has built his fortune on his melon brand.

Born in a village next to the Taklimakan Desert, Khadir lives about 4,000 kilometers from Shanghai, a distance greater than that between New York City and Los Angeles.

His late father, Emer Yakufu, trucked dates and walnuts to markets in East China. The lucrative business enabled him to earn a much higher income than most local farmers growing cotton and wheat.

Khadir took over the family business at the age of 22, and the first decision he made was to ignore his father's warning about melons.

The suggestion was not unreasonable. In the past, dried Xinjiang foods such as red dates and walnuts were highly visible in eastern China's markets, while fresh fruits like grapes and melons were hardly seen.

With no highway passing through Khadir's hometown, it took a long time to get the produce to market.

"The melons could rot on the way so you will never make ends meet," Khadir's father used to tell him.

His warning was prophetic. On Khadir's first trip transporting watermelons, it took him 11 days to reach Zhengzhou, capital of Henan province, 3,000 km away. What was worse, about 30 percent of the watermelons were spoiled and had to be thrown away.

Fussy buyers also frustrated him. Watermelons with slight breaks in their rinds, though still edible, would not be a concern for buyers from his hometown but were likely to be rejected by picky consumers in the big cities.

The next few years witnessed the rapid expansion of China's highways, with Xinjiang highways reaching a total length of 4,316 km in 2014.

Thanks to the significant reduction in driving time from the landlocked west to the east coast, more Xinjiang people have entered the fruit business, and many are members of the Uygur ethnic group.

Increasing competition motivated Khadir to make another change. With the help of the local government, he used his savings to establish a company. Melons were bought from local farmers and sent to his partners in East China via rented trucks.

Transport efficiency was substantially improved, and sales soared in the summer.

A Shanghai government official sent to Xinjiang to assist in local development suggested to Khadir he should create his own brand and sell melons on the internet.

Khadir chose low-sugar melons to cater to the preferences of urban consumers. To increase the incomes of more farmers, the local government advertised online and sought cooperation with large supermarkets in eastern regions.

Khadir has maintained high standards when sourcing melons from farmers, with only 30 to 40 percent of produce good enough. As a result, his prices are about twice those of normal melons.

He has also chosen his sales locations based on big data online.

A truck can now arrive in Shanghai in four days at the latest, and he has used cold-chain logistics to keep the fruit even fresher.

"Freshness is the sole requirement of consumers. If you lose it, you'll lose the market," he said.

When the melons ripen, hundreds of electric motorcycles carrying melons from farms gather at his company. Khadir pays his 90 employees about 10,000 yuan ($1,456) a day in total, the same amount he used to earn in a summer.

When asked the secret of success, he said, "Don't stop following changes in the outside world, whether you want to or not."

Khadir's 10-year-old son is in primary school and is eager to learn more about the outside world. Khadir hopes he will go to university to study economics.

"But things may change, and his future is all up to him," Khadir said.