Chinese COVID-19 vaccines are safe for the elderly, and it is imperative for this highly vulnerable demographic to be inoculated so as to avoid becoming critically ill, Zheng Zhongwei, head of China's COVID-19 vaccine development task force, said at a news briefing on Saturday. 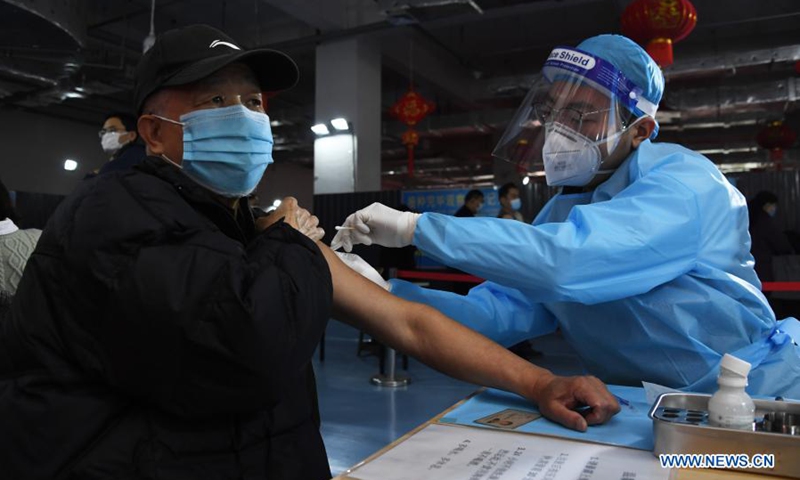 An elderly resident is inoculated at a vaccination site at Yongdinglu Sub-district of Haidian district in Beijing, China, March 14, 2021. Photo/Xinhua

Seniors are the most vulnerable group for COVID-19 due to their weak immune system and underlying health conditions. As a result, they have a very high risk of severe symptoms and mortality compared with children and young adults, he said.

Data from the recent COVID-19 outbreak in Hong Kong showed that the death rate of vaccinated patients was around 0.04 percent, while the death rate was 1.25 percent for the unvaccinated or incompletely vaccinated, Zheng said, adding that 90 percent of those deaths were among the elderly.

"These data show that vaccination can effectively lower the risk of severe symptoms and death in the elderly population," he said.

China has made positive progress in developing new vaccines to target mutated variants, including Delta and Omicron. "Getting vaccinated and booster shots can still provide protection against the Omicron variant," he added.

In regards to the safety of COVID-19 vaccines for the elderly, Zheng said more than 100 million doses of Chinese vaccines have been administered to seniors worldwide, with the oldest recipient being 106 years old, both inside and outside China.

Current data show that seniors experience slightly lower rate of adverse effects compared with young adults, "so COVID-19 vaccines are safe for the elderly," he added.

Some seniors believed staying at home can protect them from viral exposure, therefore there is no need to be vaccinated, Zheng said this belief is "extremely dangerous".

One of the characteristics of the highly transmissible Omicron variant is the increasing large number of asymptomatic cases.

"When these asymptomatic family members come back home they introduce the risk of infection to the elderly," he said, adding the task force recently noticed an incident in which an asymptomatic grandson returned home and infected his 99-year-old grandmother.

Thanks to China's effective epidemic control measures, the country's vaccination strategy began with high risk individuals and then gradually move toward inoculating seniors aged 60 and above, Zheng said. In other countries, they typically start with the elderly population and move down the age groups, he added.

"This is the reason why our seniors' vaccination coverage is still low. If we want to build a strong immune barrier, we must overcome this shortcoming," Zheng said.

"We must bolster inoculation rate for the seniors, especially the oldest ones, this is beneficial to the individual, to the family, society and the nation," he said.