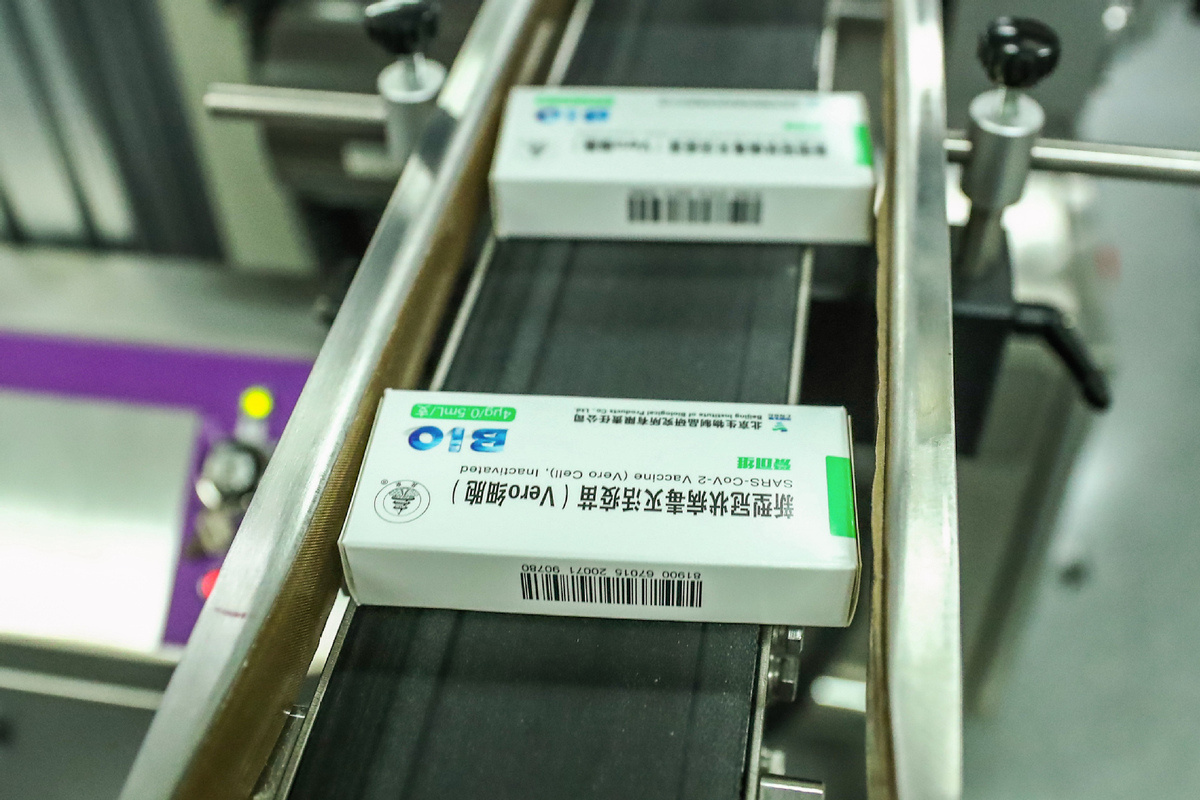 Photo taken on Dec 25, 2020, shows the packaged COVID-19 vaccines at a factory of state-owned Sinopharm.(Photo: Xinhua)

Production lines for a newly approved COVID-19 vaccine developed by State-owned Sinopharm Group were running at full throttle on Monday as more than a dozen vaccine manufacturers in China gear up to ensure a smooth and sufficient rollout of doses.

At Sinopharm's manufacturing site in Beijing's suburbs, filled vials of the vaccine－which had passed automated checks filtering out faulty doses－were packaged, labeled and coded, ready to make their way to inoculation sites across the country.

"This production line is able to complete the packaging of more than 300 vials per minute. … and each dose is assigned an identification code that allows us to examine if the entire production, distribution and immunization procedures are up to standard," said Yang Xiaoming, chairman of China National Biotech Group, a subsidiary of Sinopharm, during a livestreaming session on Monday.

The official approval that paves the way for mass inoculation nationwide, along with several green lights given to the vaccine from foreign health authorities, have all piled pressure on the company's manufacturing capacity, according to Yang.

"To fulfill domestic and global demand, we have built three new plants equipped with biosafety precautions to make the liquid doses, and set up new facilities devoted to filling vials and packaging," he said.

"The goal is to bring qualified doses to every person who needs the vaccine at a faster rate," Yang added.

According to Sinopharm, the annual production capacity in its facilities in Beijing is expected to rise from 120 million at the moment to 1 billion by the end of this year.

As factory staff works tirelessly to ensure the smooth operation of production lines, Yang said a major challenge is to assign a limited workforce and ensure every step is monitored by qualified professionals.

"As manufacturers, we are responsible for ensuring the quantity and quality of vaccines at the same time," he said.

The vaccine from Sinopharm is one of five domestic vaccines undergoing stage-3 clinical trials overseas, making China a global frontrunner for COVID-19 vaccines.

The country's development and management of supply chains for COVID-19 vaccines has also improved rapidly thanks to early preparation, according to officials.

Mao Junfeng, deputy director of the Ministry of Industry and Information Technology's Department of Industry of Consumer Products, said 18 vaccine producers in China had recently started to build up production capacity.

Three of them, including Sinopharm's unit in Beijing, had passed biosafety risk appraisals from the authorities, completing a key step toward mass production, he said at a news conference last week.

The other two leading producers are Sinovac Biotech in Beijing and the Wuhan Institute of Biological Products in Hubei province.

The company in Hubei, which is also administered by Sinopharm, has set up facilities that house both research laboratories and manufacturing plants in three months, according to Sinopharm. The infrastructure, completed in July, is designed to produce 100 million doses annually.

At Sinovac Biotech, its production lines were operating round-the-clock, capable of filling 600 doses per minute, Wang Xuesong, an employee at the company, told Beijing Evening News in late December.

According to Wang, with completion of the second stretch of production lines nearing, the company's annual production capacity is set to double to 600 million doses.

"Our production capability is likely to expand further in the future based on market demand and funds available," he said.

Meanwhile, Indonesia announced on Sunday it will start distributing the vaccine developed by Sinovac to all of its 34 provinces, joining the growing ranks of foreign countries approving China-developed vaccines.

Foreign Ministry spokeswoman Hua Chunying said on Monday that China will continue to work with other parties for the fair distribution of vaccines globally, making joint efforts in fighting the novel coronavirus and safeguarding the health of people across the world.