The Hong Kong community was injected with a shot in the arm over the weekend after the city received its first million doses of COVID-19 vaccines produced by Sinovac Biotech from Beijing on Friday. 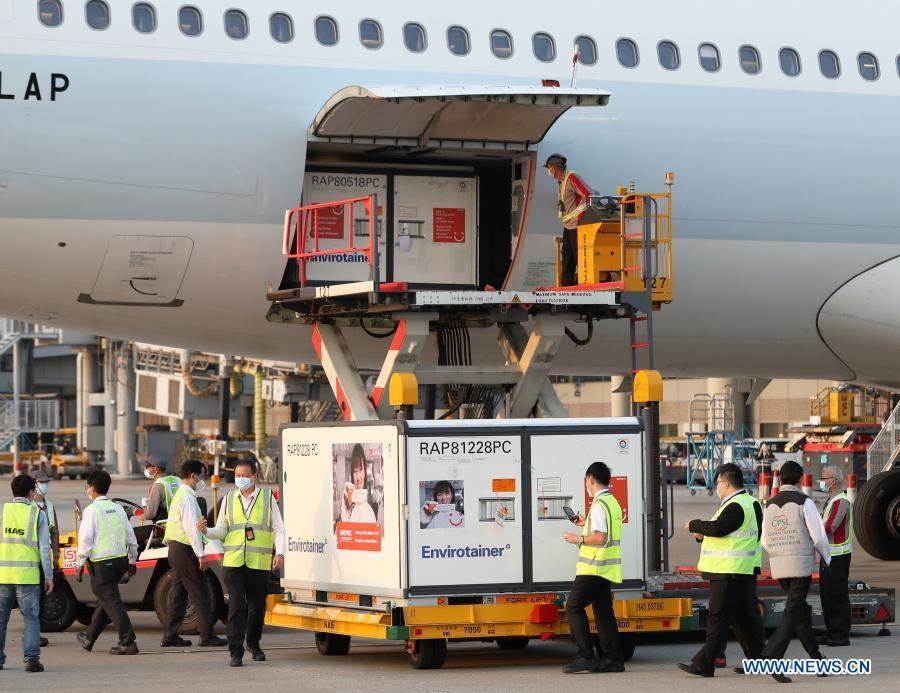 Staff members transport the vaccines at the Hong Kong International Airport in Hong Kong, South China, Feb 19, 2021. The first batch of mainland-manufactured COVID-19 vaccines arrived in Hong Kong on Friday afternoon, which, as the first vaccines available here, will enable the financial hub to start inoculating its residents next week. [Photo/Xinhua]

Hong Kong is expected to ease travel restrictions with other parts of the world and gradually resume social activities.

In his official blog, Chief Secretary for Administration Matthew Cheung Kin-chung called on residents to get vaccinated.

"The greater the number of people vaccinated, the better the chance of reducing the risk of another outbreak," he said.

People from five priority groups considered susceptible to the virus can make reservations for vaccination slots through an online appointment system starting Tuesday. Inoculations are to begin on Friday.

An estimated 2.4 million people in the target groups include healthcare workers, those aged 60 and over, public service providers such as cleaners and police officers, transport drivers and border control officers.

Cheung said that another 1 million doses of Fosun Pharma-BioNTech vaccines are expected to arrive by the end of February, providing more choices for Hong Kong residents.

Chief Executive Carrie Lam Cheng Yuet-ngor and other senior government officials will receive the Sinovac vaccines together with members of the Executive Council and Legislative Council on Monday, according to local media.

Cheung said the first batch of domestically developed Sinovac coronavirus vaccines was a "silver bullet" for Hong Kong to restore economic and social activities, as well as resume cross-border travel with the mainland.

Executive Councilor Jeffrey Lam Kin-fung, who is also a lawmaker representing the business sector, expressed hope for Hong Kong to resume cross-boundary trade and travel once its mass vaccination campaign kicks off, so that it can revive its hard-battered economy.

To resume cross-border travel with the mainland, Hong Kong must deliver better results in pandemic prevention and control to assure the mainland authorities, said lawmaker Yiu Si-wing during a local television program on Sunday. Yiu spoke as a representative of the tourism sector.

But before resuming travel with the Chinese mainland, Yiu said there is a better chance of restarting the suspended air travel bubble between Singapore and Hong Kong as early as March, allowing residents from the two cities to travel on designated flights without quarantine.

The travel bubble was originally scheduled to start on Nov 22, but was suspended the day before the scheduled date when Hong Kong was hit by the fourth wave of outbreak.

Hong Kong reported 20 new COVID-19 infections on Sunday, of which 19 were locally transmitted, bringing the city's overall infection tally to 10,868.