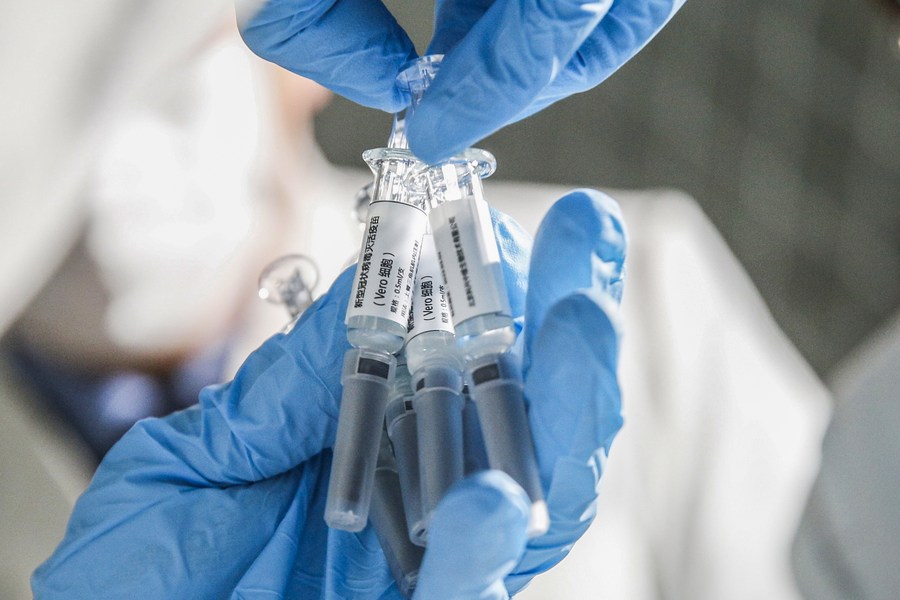 A staff member displays samples of the COVID-19 inactivated vaccine at Sinovac Biotech Ltd, in Beijing on March 16, 2020. (Photo/Xinhua)

Two inactivated vaccines for COVID-19 under clinical trial in China are likely to provide immunity for up to three years and may be available on the market by the end of this year, according to their developer.

The candidate vaccines, which are already approved for emergency use and are undergoing phase three clinical trials, have proved to be safe and able to cause production of antibodies in all volunteers that are effective enough to protect them from the novel coronavirus 28 days after they received a second dose, said Zhou Song, chief legal adviser of China National Biotec Group, which is a subsidiary of China National Pharmaceutical Group Corporation.

CNBG has been recognized as a comprehensive biopharmaceutical enterprise focusing on human vaccines, blood products, medical aesthetics and animal healthcare.

Many experts are unsure how long a COVID-19 vaccine can protect people from the virus, with some suggesting the period could be less than six months. But Zhou said it is very likely the immunity could last between one and three years, based on existing research, including animal experiments and clinical trials, although sustained monitoring is needed to accurately determine the length of immunity.

"We have kept monitoring the first 180 volunteers, who received the vaccines more than five months ago, and found the levels of the antibodies for the coronavirus are still stabilizing at the peak, and there is no sign of them dropping," he said.

Although some subtypes of the coronavirus are mutating, research has shown the vaccines have been effective, and people may not have to receive COVID-19 vaccines every year for protection, as they do with flu vaccines.

Zhou said researchers have been closely following the mutation of the virus and found that the mutations have not caused fundamental changes to its genetic sequence.

In mid-July, data from an experiment by the company showed the two candidate vaccines are also effective against new strains of the virus, including the strain that caused the outbreak at Xinfadi wholesale food market in Beijing in June, and those identified in Russia, the United Kingdom and the United States, he said.

"The two vaccines can cope with mutations of the novel coronavirus for a few years at least," Zhou said.

As an emergency measure, the two candidate vaccines have been approved by Chinese authorities for use by groups at higher risk of infection, such as medical workers treating COVID-19 patients and personnel going overseas.

None of the people who have received the vaccines in higher-risk countries and regions have been infected with COVID-19, which has proved the effectiveness of the vaccines, he said.

The company has established two high-grade biosafety workshops for producing the vaccines, and it is expected they will be approved for the market at the end of December, at the earliest, he said.

The current production capacity is 300 million doses annually, and it may be expanded to between 800 million and 1 billion doses a year, which can satisfy the demand from between 400 and 500 million people annually, according to Zhou.

Vaccination is regarded as the most important way to fight the COVID-19 pandemic. China has been leading the world in the research and development of COVID-19 vaccines. By early August three vaccines under research in China had entered phase three clinical trials, accounting for half of the world's total, according to the World Health Organization. In August, Russia announced it registered the world's first COVID-19 vaccine.

Although China has achieved success in fighting COVID-19, some experts believe the coming fall and winter will be a major test.