VAT cut on 'orphan drugs' will lift healthcare burden, but many still struggle to afford medication 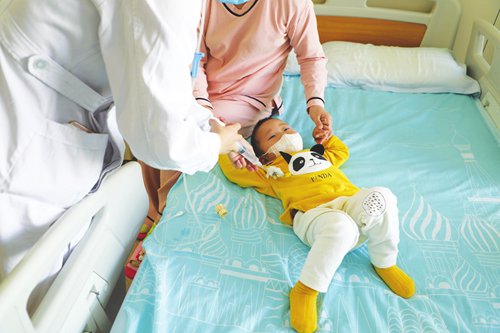 Thirteen-year-old Han Shuo is one of the estimated 20 million people suffering from a rare disease in China. Born with Gaucher disease, a genetic condition, she needs up to five injections a month, but often her family can't afford to buy them all. Because diseases like Han Shuo's affect a small number of the population, pharmaceutical companies, in China and abroad, have little incentive to develop drugs for these conditions, unless there is government backing. Referred to as "orphan drugs," even when they are developed, sometimes they are not covered by insurance or they are too expensive for patients.This is the dilemma facing Han Shuo's parents, who are already struggling to live on a low income. But lately, hope is on the horizon. A new insurance scheme pays for some of the cost of their daughter's treatment, and now the government has announced tax reductions on drugs for rare conditions.   Effective March 1, China reduced value-added tax (VAT) on 21 drugs used to treat rare diseases and four active pharmaceutical ingredients (APIs) by 3 percent, and luckily for Han Shuo, her drug is among the 21.  And on March 13, the National Healthcare Security Administration issued a plan to amend the national medical insurance drug catalogue in 2019, which will give priority to drugs for cancer and rare diseases.Han Shuo and her family are excited that the vital drugs she needs to enable her to manage her condition and ensure her quality of life will become a bit more affordable. She told her father, Han Qi, that she is confident that she will get better and is looking forward to running and playing like a normal kid. Glimmer of hopeHan's mother, Kang Changxia, takes her to school by bike every morning, then rushes to her cleaning job. Han Qi, Han's father, is a chef, and they both work as much as they can to be able to afford the cost of their daughter's medication. She was diagnosed with the disease when she was 3. Patients with Gaucher disease lack an enzyme needed to break down a certain fatty chemical in the blood, causing build-up of fatty substances in organs, particularly the spleen and liver. This causes them to enlarge, and affects their function. Other complications include blood problems and bone issues. Han Shuo has anemia, and she has a lot of pain in her legs, making it difficult to walk, so she uses walking sticks. After class end - she is only excused sports - her friends help her get home, as her parents are still at work.  "One injection of Imiglucerase to treat Gaucher disease costs more than 23,000 yuan ($3,434). We have to pay 6,900 yuan," Han Qi told the Global Times. In June 2017, Tianjin established an insurance system that included rare diseases, and now the family can claim back 70 percent of Han Shuo's medical costs. But when she was first diagnosed, the high cost of the medication meant it was out of reach for the family. Eventually, her spleen ballooned to three kilograms, and when she was 9, it was removed.Even so, since the family's monthly income is just 8,000 yuan a month, Han Shuo only receives one injection of the life-saving drug. She needs at least five injections every month, according to her height and weight. The underdose aggravates her illness, and the week before, she could not attend school, because her legs hurt so much.

"The new policy will relieve our financial burden to some extent, although we don't know by how much yet. It brings us hope and shows the government is paying attention to rare disease patients," Han Qi said. "We can buy more injections for Han Shuo if the price falls. If my daughter gets enough medication, she can live as long as a healthy person," he said.  Increased determination"The VAT reduction policy strongly indicates the government's determination to improve the problems associated with rare diseases," Kevin Huang, founder and president of the Chinese Organization for Rare Disorders (CORD) told the Global Times.CORD, a non-governmental organization, is committed to promoting cooperation between rare diseases patients, medical professionals, pharmaceutical companies and government departments. It also works on strengthening public understanding of rare diseases, improving access to medication to treat rare diseases and promoting policies.Huang said the policy will surely attract more attention to rare diseases, and he expects more policies to be introduced following these initial steps.On February 15, the National Health Commission (NHC) announced the establishment of a national cooperation network for the diagnosis and treatment of rare diseases to improve the diagnosis, treatment and management of rare diseases. Led by the Chinese Academy of Medical Sciences and Peking Union Medical College, 324 hospitals nationwide which specialize in rare diseases will be involved in the network. "Orphan drugs should be given priority for examination and approval, and effective drugs should be recommended for sale both in China and overseas simultaneously," Jiao Hong, head of the National Medical Products Administration told China Youth Online on March 7."The market price of drugs depends on the selling price of pharmaceutical enterprises, import tariffs and the profits of drug distributors. The VAT reduction policy actually benefits pharmaceutical enterprises directly. At present, it is hard to say how much cheaper it will be for patients," Huang said.

These new measures are the latest in a series of policies rolled out in the past few years to help those suffering from rare diseases. In December 2016, China included orphan drugs into the medical reform plan under the 13th Five-Year Plan (2016-20).The NHC and four other departments launched the first catalogue of 121 rare diseases in China on May 11, 2018. The catalogue contains the first official definition of rare diseases in China and brought hope to patients, their families and clinicians. "Following the drug regulatory reform launched since 2015, there is a substantive change for the government to speed up the review and approval process of new drugs. Take the orphan drugs as an example, it used to take several years for review and approval, but now it takes a few months only" Chang Jianqing, vice president of Drug Regulatory Policy at Tigermed, told the Global Times.She also called for health authorities in China to update the orphan drugs list in a timely manner.Currently, China only has drugs to treat 31 out of the 121 rare diseases identified, Huang said. The VAT reduction policy may attract foreign pharmaceutical companies to the Chinese market and encourage domestic medical companies to develop new drugs, he said.Incentives neededThe small demand for orphan drugs compared with other types of drugs is one of the barriers for domestic drug makers, said Lin Xiaoqing, a dermatologist at The First Affiliated Hospital of Fujian Medical University, in East China's Fujian Province. "Sometimes, we have a pack of drugs that hasn't been used up, but it's already out of date. Other times, we may stock a drug for a rare condition, but in a whole year, we don't treat a patient for that disease." Since so few orphan drugs are developed in China, Chang hopes there will be more support in this area. "At present, there aren't appropriate incentives for research and development of orphan drugs. Basic research in this area is not active. With the VAT reduction and other encouraging policies, such as timely update of reimbursement list to come, we are expecting domestic drug companies to pay more attention and devote to the research and development of orphan drugs," Chang said, "For those who want to make orphan drugs, international cooperation might be an efficient approach."Drug makers will only be motivated to develop a new drug if they will profit from it, due to the high expenses involved in bringing a new drug to market. The average R&D expenditure of a new drug would be as high as $1 billion, according to an industry insider. However, the majority of orphan drugs available are not sold in China and many are not covered in the healthcare insurance system so far, said Huang. "We need to improve access to medication by accelerating the introduction of foreign drugs into the Chinese market and integrating orphan drugs into the health insurance system," he said.