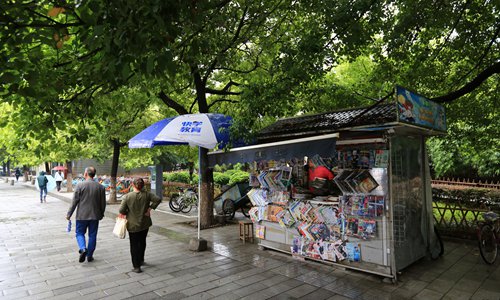 News stands that once could be seen on virtually every corner may have become a thing of the past after they were reported to have been removed from Chinese cities, while experts said their disappearance was only a result of market forces.On one of the coldest days of the Beijing winter so far, news stand owner Wu, 43, was collecting piles of past newspapers and magazines as he attempts to clear his kiosk before the end of January, the deadline given to him to close his kiosk."Maybe that's the end of my news stand. The government may tear it down for good, I don't know," Wu said, holding tightly onto his news stand as if it would collapse at any moment.Personal touchWu said he has been running this news stand for almost three years. "It's not just my way of making a living. I know all these people who used to buy newspapers and magazines from me."He can even reel off the types of periodicals his customers like to buy. "Football magazines and gossip ones are the bestsellers; newspapers sometimes are a good sell when there's big news," he said as he was sorting out his papers.According to statistics, altogether 10,468 news stands were removed nationwide between 2008 to 2013, according to the Xinhua News Agency.Many of these news stands were taken down because the government said they affected the cityscape, blocked traffic or because they were "built illegally," said Xinhua.In November 2017, almost 100 vendors in Shanghai wore masks bearing the words "Silence for Today" to bid farewell to their news stands, which were slated to be dismantled by the city, news site China.cn reported. "It's not only the owners but also many citizens who feel saddened by the disappearance of these news stands, which were once "cultural symbols," a graduate student from Tsinghua University told the Global Times. He said one news stand in his university was also recently shut down. "It's a regression. And where should we buy newspapers and magazines?"Although we are now living in a digital era and the information we need for our daily lives is just the touch of a screen away, the existence of news stands and bookshops are also important because they are a major way of disseminating the government's voice, Niu Fengrui, a research fellow at the Chinese Academy of Social Sciences' Institute for Urban and Environmental Studies, told the Global Times.Sales of newspapers in Beijing's news stands increased 600 percent during the 19th Communist Party of China National Congress, which was held in October last year, the Xinhua reported.Bad businessHowever, Wu, the news stand owner in Beijing, said his business has gotten worse every year due to the rise of new media. When times were good, he could sell hundreds of newspapers in one day, he recalled.The Beijing government introduced the first batch of news stands at the end of 1997, and their number reached a peak of 2,500 in 2008, with 1,900 scattered in urban districts, said Xinhua. These news stands helped many people who were unemployed, disabled or living in poverty find work."The rise of new media has changed the fate of traditional media, and 'screen reading' is the new order of the day," Yang Yexin, the artist behind the Shanghai protest, told China.cn. Wu said like himself, many news stand owners peddle other things such as phone cards and drinks just to make ends meet."If these news stands can't make profits, they should just disappear. It's only a result of market regulation. Keeping them means the country has to spend huge amounts of money, and it's not worth it," said Niu.Tian Ning, a professor of architecture at the Beijing University of Civil Engineering and Architecture, told the Global Times that apart from the issue of money, authorities are taking down news stands because they are indeed obstructing pedestrians. However, this problem can be solved and many local governments are taking measures to reduce the size of news stands, said Tian.The Beijing government has said in 2016 it is designing a smaller type of news stand, which will reduce the current 8 square-meter kiosk to 3.75 square meters in size, the Xinhua reported.The change means these news stands will only be able to sell newspapers and magazines, leaving no space for drinks or other goods.