CHINA Veteran, 93, vows to work until last breath for nature

Veteran, 93, vows to work until last breath for nature 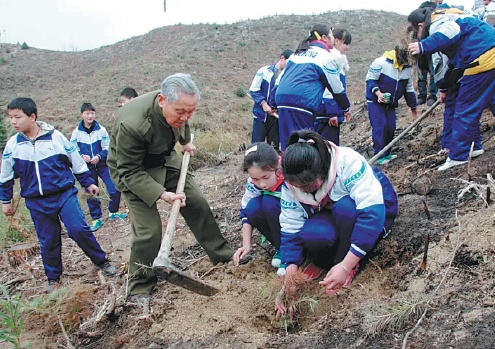 Decorated for bravery in the War to Resist US Aggression and Aid Korea (1950-53), 93-year-old veteran Zhu Zaibao now fights for another cause－environmental protection.

Chairman of the Yueyang Environment Conservation Volunteers Association in Hunan province, Zhu has been volunteering in the cause for many years now.

Most of his environmental activities are targeted at children. As a part-time student counselor, he has worked at some 4,400 primary and secondary schools in Yueyang and given lectures to over a million students and their parents on important environmental issues, including wetland protection, fresh water conservation, biodiversity and the eco-friendly lifestyle.

Zhu is particularly focused on water conservation and reuse. He encourages each student to save at least 10 metric tons of fresh water every year by getting their families to reuse wastewater.

"Teenagers are a key group for environmental education, and I believe in education as a force for change, because even in their early years, children can develop beliefs and habits that last forever," he said. "Their attitudes will determine the future of our world. Every one of us has an obligation to prevent pollution and conserve resources. Environmental protection is long-term work and is beneficial to both current and future generations."

Born in 1928, Zhu said that he saw firsthand the miserable life Chinese people led before the founding of the People's Republic.

He began herding cattle at the age of 6, and started work when he turned 12. Four of his seven siblings starved to death, and sometimes his family had to eat weeds and tree bark to survive.

"When New China was founded in 1949, the people were finally free from oppression and began to live new lives, so I am forever grateful to the Communist Party of China."

In 1951, Zhu joined the Chinese People's Volunteers army as a scout. During a battle in 1953, only 30 of his 1,800 comrades, who were responsible for clearing minefields for the main forces, survived. He suffered an injury to his right knee as the result of a landmine.

He was awarded a medal for his bravery in the battle and became a probationary Party member.

"I swore that I would not waste a single day of my life and would honor the sacrifice made by my comrades," he said.

In 1966, when he was 38, Zhu had an operation for gastric cancer. He was told by doctors that he had no more than five years to live.

The illness forced him to retire early from the military, but he did not want to waste his life by doing nothing.

"Although the doctor declared that I would not live long, I was determined not to fail my mission and original inspiration as a Party member, nor would I fail the commitment I made to my comrades," he said.

Fifty-five years later, Zhu is not only still alive, he's as active as ever. He works without pay for 12 hours a day, over 300 days a year on issues of public welfare and environmental protection.

In response to the government's call to protect the Yangtze River ecology, Zhu and his volunteer association raised 2 million yuan ($313,650) to plant over a million trees along the river between 1999 and 2020.

In addition to a passion for environmental protection, Zhu is also devoted to other public welfare activities.

He has raised more than 20 million yuan to help 30,000 students with financial difficulties and built a primary school in Yueyang's Pingjiang county. During the 2008 Wenchuan earthquake in Sichuan province, he raised 1.38 million yuan for people affected by the quake. Over the years, he has donated 520,000 yuan－money saved from his army pension－to different projects.

Zhu is as hard on himself as he is generous with others. He lives a frugal life in a 40-square-meter apartment without a bathroom or a kitchen, and his children have to stay in a hotel whenever they visit.

He still cycles for kilometers between places to promote environment protection awareness and has said that he is willing to fight for his cause until the last day of his life.

"As a Party member, I am willing to spend all my life serving the people," he said. "People only live once, and I choose to make my life as fulfilling as possible."