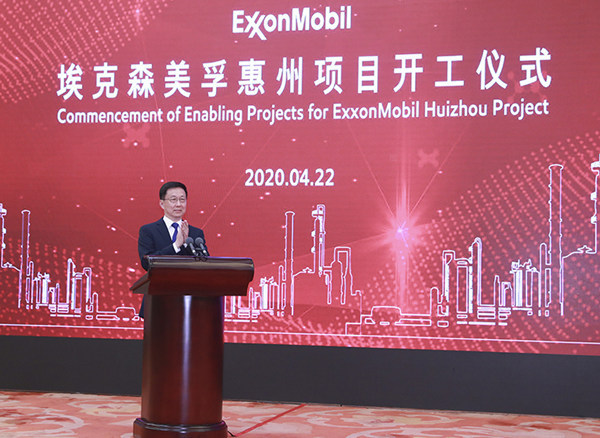 The online ceremony was held via video with connections linking the Huizhou Dayawan Petrochemical Industrial Park in southern China's Guangdong province, the Great Hall of the People in Beijing and Dallas of the United States.

Around 11 am, Han, also a member of the Standing Committee of the Political Bureau of the Communist Party of China Central Committee, announced the start of construction work for the project.

The ExxonMobil Huizhou Project is the first large-scale petrochemical project built by a wholly-owned US company in China. The project, with a total investment of about $10 billion, will mainly include a 1.6 million metric-ton-per-year ethylene cracker.

The project will uphold the principles of mutual benefit and win-win results and will accelerate the optimization and upgrading of China's petrochemical industry and promote the competitive edge of the Guangdong-Hong Kong-Macao Greater Bay Area.