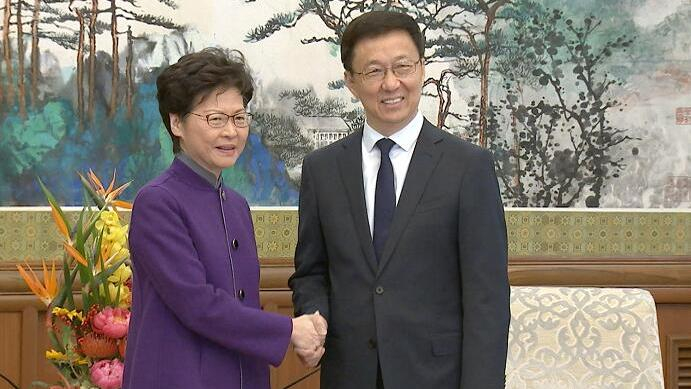 The Central Government fully affirmed the work of Carrie Lam, Chief Executive of China's Hong Kong Special Administrative Region (HKSAR), her administrate team as well as the Hong Kong police in dealing with the months-long turmoil in Hong Kong since June.

Chinese Vice Premier Han Zheng made the comment during a meeting with Carrie Lam at Beijing's Diaoyutai State Guest House on Wednesday.

Noting the escalating violence in Hong Kong, Han said it's in the whole and fundamental interest of Hong Kong society and its residents to pay the price, and to end violence and restoring order remain the priorities for Hong Kong's administrative, legislative and judiciary departments.

In response, Carrie Lam reaffirmed the SAR government's resolution in curbing violence and bringing the Asian financial hub back on track.

At the meeting, Han uttered support for the HKSAR government to take more proactive and effective measures to tackle social problems, especially those involving employment and housing for low-income families and young people.

Carrie Lam was in Beijing for the third plenary meeting of the Leading Group for the Development of the Guangdong-Hong Kong-Macao Greater Bay Area on Wednesday.

She attended the opening ceremony of the second China International Import Expo (CIIE) in Shanghai on Tuesday, where she also had a brief meeting with Chinese President Xi Jinping.