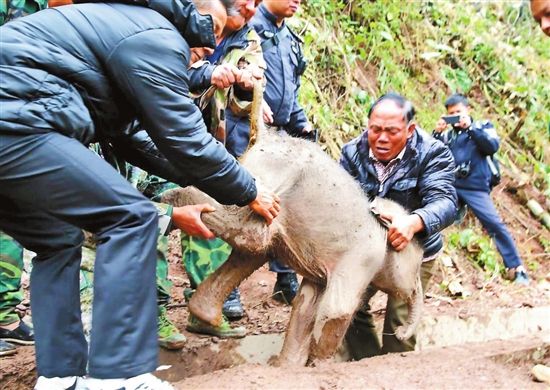 Officials rescued an infant wild Asian elephant which fell from a 60 meter-high hill and tumbled into a canal near a village in Jinghong City of Xishuangbanna Dai autonomous prefecture, southwest China's Yunnan Province.

The seriously injured animal was found barely breathing in the early morning of Jan. 13.

Local forestry police and staff from the nature reserve rushed to the scene after receiving the report and treated the elephant which was unable to move. It was carried out of the forest on a stretcher made from a cloth bag and immediately sent to the Wild Elephant Valley in Jinghong City.

It was transferred to the Asian Elephant Breeding and Rescue Center for further observation.