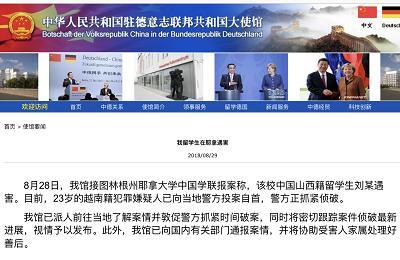 The Chinese Embassy in Germany published a statement  on its website urging local police to investigate the case.

A 23-year-old Vietnamese male handed himself over to German authorities on Tuesday for the murder of a Chinese student who was a student at the University of Jena in Thuringia, Germany.

The 26-year-old victim surnamed Liu, was from China's Shanxi Province, according to information from the school's Chinese student association.

Liu's body was discovered by police at nearby riverbank.

Local authorities are investigating the exact cause of death, while a motive remains unclear.