Village crafts its way to prosperity 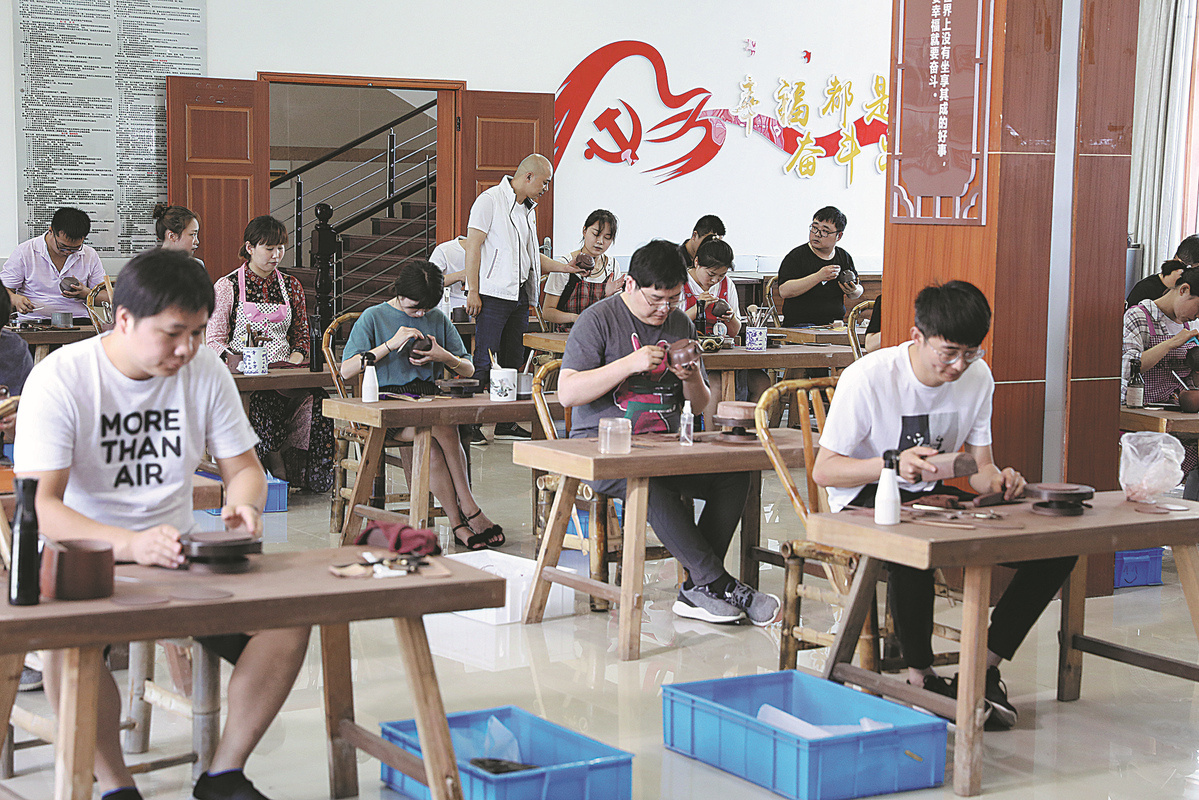 Fan Zefeng has performed two contrasting roles for 12 years. By day, he works as the Communist Party of China chief in his village, shuttling between meetings, visiting residents and helping solve a range of problems.

In the evenings, the 46-year-old can be found in an art studio working on his purple clay teapots and teaching students.

"I love this way of life. Dealing with village affairs has polished and broadened my mindset, like a kind of spiritual practice, and has also helped improve my art," he said. "My two roles are aimed at the same goal－to make life in our village better."

Fan grew up in the village of Xiwang, in Yixing, a city in Jiangsu province.

Like many other families in this area, he learned how to make purple clay teapots, or zisha hu, from his mother when he was a child. His passion for the craft developed, and he eventually made the teapots for a living.

Fan said his decision to choose an artistic career was not solely about making a name for himself, but also to turn Xiwang into a renowned pottery production base globally, in turn improving local living standards.

Yixing has long been renowned for its purple clay art. Boasting a history of more than 2,000 years, the city sits on the west bank of Taihu Lake and is known as China's pottery capital. The pottery in Yixing differs from that elsewhere, as it is made from a special purple clay sourced from local rock mines.

Zhou Xiaodong, director of the Yixing Ceramics Museum, said purple clay teapots became popular due to a change in the way people drank tea during the Ming Dynasty (1368-1644).

"Instead of boiling hard-pressed tea bricks, people turned to pouring hot water into a pot to brew tea leaves," he said.

As a teapot handmade from purple clay could better retain the aroma of the tea leaves and enhance the taste, such vessels in Yixing quickly became widely sought by the literati and the wealthy.

Xiwang was one of the first places in China to begin crafting items made from purple clay, and this profession has remained a pillar industry in the village since the Ming Dynasty.

However, for a long time, this prized clay failed to bring prosperity to the village.

Fan said Xiwang was stricken by poverty in the 1970s and '80s, when many farmers had to work at pottery plants in off-peak seasons to earn more money to support their families. During those times, the purple clay industry was confined to small workshops that were unable to maintain the level of quality and had little scope to be creative.

"I think the traditional format hampered the development of this art form," Fan added.

Believing in the power of collective wisdom and strength, he and several other young artists set up a professional purple clay art studio with other villagers in 2009－the first of its kind in the country.

Villagers gathered at the studio to learn and exchange skills. Master craftsmen and art teachers were invited to conduct classes and hold exhibitions to improve local handicraft expertise, Fan said.

The production of items made from purple clay soon evolved from a closed format to one that was more open and backed by a complete industrial chain comprising raw material processing, design and production, training, marketing and promotion.