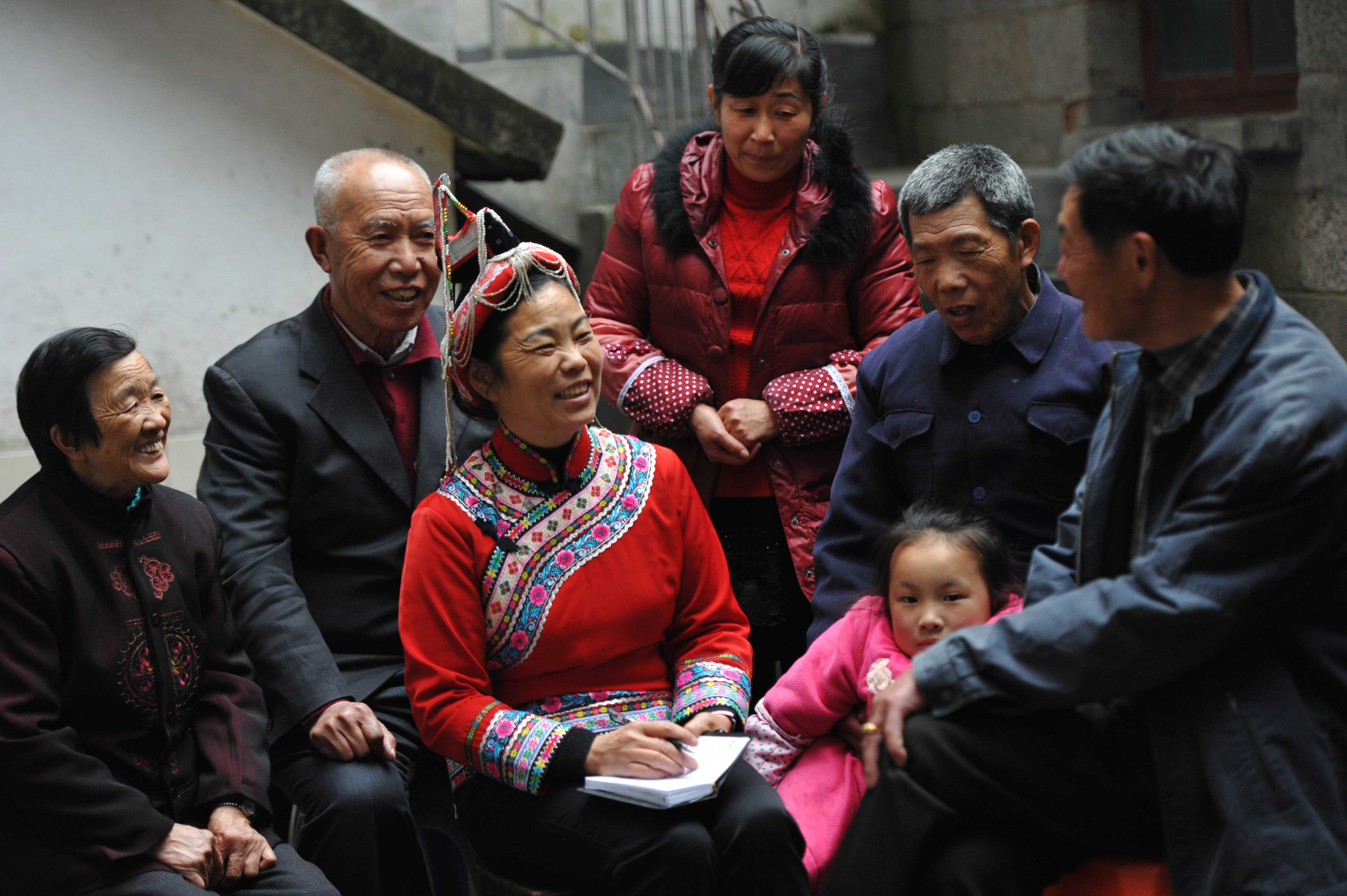 Lan Nianying has led Xinyue village in Jiangxi province as Party chief for decades, developing the seedling industry and ethnic tourism under her tenure.

About a 15-minute drive from downtown Zixi county, to the east of Fuzhou city, Xinyue is home to 420 people, 90 percent of whom are from the She ethnic group. Its per capita income last year was 17,000 yuan ($2,600), double the figure five years ago.

Tourists come to see renovated She dwellings and the lush rural landscape, and can enjoy the area's unique culture, drink rice wine and dance with people in traditional dress.

"When I was 11 years old, I moved here with my parents. Since our people decided to treat this land as our new home, we had a duty to care for it," Lan said.

She wears a flowery blouse, black trousers and black shoes, with her long black hair braided and tied in a bun. Sun-tanned from outdoor activities, the 62-year-old looks brisk and efficient.

Xinyue is shaped like a crescent, and the name of the village means 'new moon'. According to Lan, it also contains the symbol of hope.

Most people migrated to Jiangxi from Zhejiang province in the 1960s as their old houses would be submerged following the construction of a hydropower station. They started new lives in the lands around Xinyue, which lies at the foot of a hill.

During the early 1980s, Lan, who was then in her early 20s, noticed that every time the villagers went to visit relatives in Zhejiang, they brought fruit seedlings back to plant. She came up with an idea to cultivate seedlings in the village, but her first attempt failed, as she didn't know what she was doing.

In 1984, she sold the pigs the family was raising for 200 yuan, which she used to pay travel expenses and tuition for her husband to attend a seedling training course. He taught her what he had learned, and Lan began to experiment on her own.

The following year, she invested all their savings in cultivating loquat and orange seedlings, which earned her a net profit of about 10,000 yuan, a significant sum. Lan became the first person in the village to make that much money.

She quickly became a well-known seedling grower. Some of the villagers came to her for lessons, and so when she was elected village head in 1994, she decided to help more people get into the business.

Lan said she sensed an opportunity for the village to improve its income by developing a seedling industry after she read about the problem of soil erosion around the country.

She called on the villagers to help her scour the mountains to collect seeds for reforestation. It took hours and a lot of climbing up and down trees to gather enough seeds.

"The view from up there was so different," she said. "But the villagers had elected me to lead, so I had to do practical things for them."

"The villagers worried that they wouldn't know how to market properly, so I had to reassure them," she said.

Under great pressure, Lan spent most of the year finding markets for the seedlings. "I went to every city in Jiangxi. I spent nights on the road for 28 days straight due to all the traveling around."

At the end of 2000, she returned to Xinyue, carrying two big bags of cash-about 2 million yuan, in total. The profits were divided among the 50 households.

"Because of the national reforestation policy, barren hills and wastelands all over the country were being afforested, so there was a great demand for seedlings," she said.

Due to market saturation in recent years, Lan has been helping villagers upgrade the business by turning to the cultivation of rare seedling species.

In 2016, Xinyue started to develop rural tourism potential based on the appeal of its lush environment and unique culture.

Vacant spaces and factories have been transformed to look more like traditional She buildings. Last year, the village attracted more than 200,000 tourists. And a new rice wine processing plant is being built this year, which Lan said will expand production and further increase incomes.