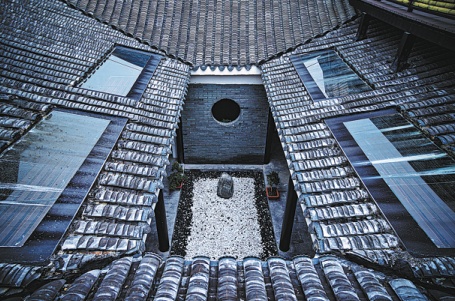 Once filled with chaotic pig farms, one village has turned into a tourist getaway.

On a day in late May, Lianfeng village, in Zhejiang province's Jiaxing city, looked amazing in the spring sunshine.

Featuring the south of the Yangtze River's lower reaches, the village covers an area of about 7.2 square kilometers and is home to more than 3,800 villagers.

Well-paved roads meander through the labyrinth of the green rural landscape. Fountain water springs from the center of small lakes, and gray-tiled, white-walled houses are dotted around lush grass and trees.

Wang Yuqin has been doing a brisk restaurant business in Lianfeng over the last few years.

Her restaurant is usually fully booked during weekends and major holidays.

Wang gave a broad smile when she was asked how much her catering business brings her.

"Over the past few years, we have not only seen a steady increase in annual income, but more importantly, life is now more pleasant and promising than it was before when it was just about raising pigs," Wang says.

Before 2014, the village was crowded with illegal makeshift constructions mostly for pig raising and animal waste.

"It was dirty and stinky everywhere then, and the antenna hung on the telegraph poles like cobweb," says Jin Yunhai, deputy Party secretary of Lianfeng.

The village had a long pig-raising history, but spontaneous animal rearing by villagers posed an increasing burden on the environment.

"As the pork market was on the rise, villagers were encouraged to expand their business by setting up makeshift pigsties," Jin says.

It did not take long before it took a toll on the environment. Sewage was flowing into the river and silt blocked the waterway.

The deteriorating environment also posed increasing risks for the pigs' health and incurred costs for many villagers. 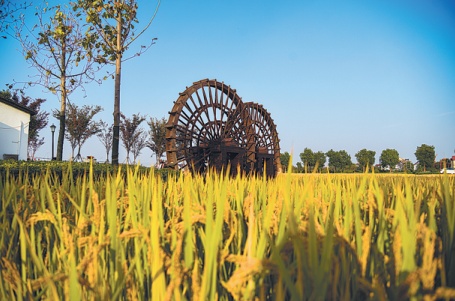 A paddy field in the village in autumnal glory. (Photo: China Daily)

So the local government began to work on a shift in village development in 2015.

But it was still difficult to talk the villagers out of the business they had relied on for so many years. Thus, village officials took the initiative to close their own pigsties.

Jin was among the first people to quit the business where he kept hundreds of pigs in an area of 500 square meters.

The local authorities also introduced favorable policies including subsidies to help villagers with the transition.

Those who dismantled their pigsties and grew peach trees or grapes would be given 800 yuan per mu ($125 for 0.07 hectares) of land for three consecutive years.

Those measures eventually convinced the villagers to switch trades, and the village invested on green landscaping and infrastructure in the following years.

"We dug up the silt and animal waste from the river, paved concrete roads and planted trees," Jin says.

A public lighting system and decorative walls made of red bricks from old pigsties have been put in place, giving the village a big facelift.

Tourists have since made their way to Lianfeng, and the unexpected boom encouraged the local authorities to develop tourism.

Tourists can expect peach blossom and picking festivals, historical village tours and a feast full of local dishes when they visit Lianfeng. This has helped Lianfeng to be named a paragon of beautiful villages nationwide in a 2019 national village awards ceremony in Beijing, and this in turn brought in more tourists to the village.

The villagers have also turned their idle houses into homestays and restaurants.

"I did worry the most about my source of income when dismantling my pigsty, but I didn't expect that guest arrivals were more than I could handle," says Wang when talking about her transition to a restaurant business in Lianfeng.

Her son-in-law left his job as a chef in the city and came back to help out in 2018, when her family spent more than 200,000 yuan upgrading their restaurant business.

To date, Wang's restaurant has been frequented by tourists from Zhejiang, Jiangsu and Shanghai.

Jin says many locals like Wang had their lives greatly improved through catering, homestay and e-commerce of rural specialties.

"Rural revitalization has brought us real benefits and we welcome it from the bottom of our hearts," Wang says.