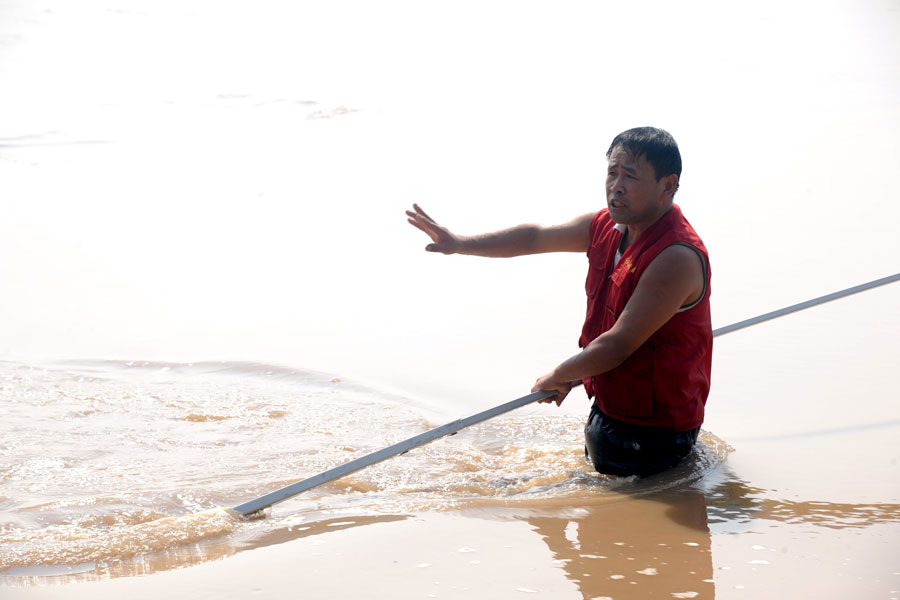 When summer comes, Wang Hexin patrols along the Yellow River to stop children from playing in the water and to ensure no one drowns.

Having grown up by the Yellow River, which runs 30 kilometers through his home district of Zhangqiu in Jinan, Shandong province, Wang witnessed how the river fed people living along it. However, he also witnessed tragedies.

In August 2011, he joined the rescue effort of a senior middle school student who jumped into the river to save a child.

"Unfortunately, the student died," Wang said. "When rescuers put the white blanket over him, his mother cried out his name hysterically. It was really heartbreaking."

He then made a decision to patrol the river and stop children from swimming in it.

"Most of the children in the village are left behind by their parents who go to work in the cities," Wang said. "During summer vacations, these children have nothing to do, so they prefer to play with water in the river. As they are unaware of the dangers, it's easy for them to get in trouble.

"The river seems to be running gently, but it carries a lot of silt that forms dangerous gullies and slopes at the bottom."

One day in May 2012, while he was farming at the riverside, Wang saw several children playing in the water.

"I told them there were steep slopes under the water and tried to persuade them to stay away from the river, but none of them did as I told them," he said.

He then found a branch and walked into the river to show them how dangerous the river was.

"Within 2 meters of the bank, I suddenly fell down a slope and became submerged in the water. But the children laughed instead of being scared. They said I squatted down to scare them," Wang said.

When he walked into the river again with the branch as a measure, the children were finally convinced.

For those who insist on playing in the river water, Wang tells their teachers and parents.

"Some children will hate me as their parents will give them a lecture, but I know they will understand me when they grow up," Wang said.

To make more people aware of the dangers in the river, Wang goes to schools to talk about safety.

At schools, he instructs children to submerge their noses and mouths into wash basins to feel what it is like to be under water. He also brings children to the riverside to explain the dangerous conditions.

To date, Wang has been to more than 100 schools.

With his advice, the local government of Huanghe town organized a patrol team of 24 people selected from 12 villages located along the river.

"All of the members are local farmers. They are assigned different parts and earn daily subsidies," said Meng Yongsheng of the town government.