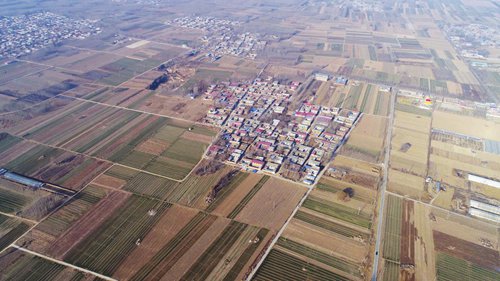 An aerial view of Guanlimahu village in Xiongxian county, North China's Hebei Province, which will be replaced by the main railway station of Xiongan New Area after villagers move out. (Photo: IC)

The residents of Guanlimahu village in Xiongxian county, North China's Hebei Province, will be moving away from their hometown soon.Large-scale construction on the Xiongan New Area is set to begin. Xiongan's main railway station will be built where Guanlimahu is located.The station will be the "largest in Asia."On April 1, 2017, China announced plans to establish the Xiongan New Area, located about 100 kilometers southwest of Beijing, in what an official statement called "a strategy that will have lasting importance for the millennium to come and a significant national event," the Xinhua News Agency reported.On December 24, construction began in Guanlimahu when a 23-meter-long rotary drilling rig was dug into the earth.Construction of the station is expected to be completed on March 31, 2020, enabling passengers to travel from Beijing to Xiongan in just 30 minutes. The station will also serve as a traffic hub for the Beijing-Tianjin-Hebei Area.Now, two years after the country announced the Xiongan project, cranes can be seen everywhere in Guanlimahu, together with vehicles and workers from outside the village.In the village, encouraging slogans promoting construction are printed on walls.With construction of Xiongan continuing rapidly, everything in Guanlimahu will soon be lost to history.Xiongan spans three counties in Hebei - Rongcheng, Anxin and Xiongxian. Now work is underway to lay the underground pipelines and the area's water, power and gas infrastructure, which is expected to grow to 1,770 square kilometers, roughly the size of Shenzhen, according to Xinhua.Construction is slated to begin soon in the Rongdong area, a 13-sq-km residential area that is expected to be home to 170,000 people to the east of Rongcheng county.The first batch of residents, including both resettled locals and new residents, will move into the compound by 2020.Authorities are making detailed plans to transform ordinary rural towns into 22 special townships, each featuring different characteristics such as intelligent technology, an elderly-friendly environment or creative industries.