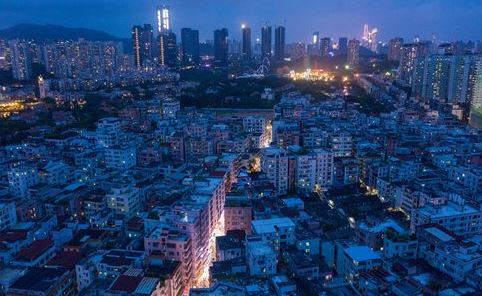 Baishizhou, the "village in the metropolis" in Shenzhen, South China's Guangdong Province, to be renovated. (Photo: VCG)

Baishizhou, known as "the village inside the metropolis" and also the most densely populated area in Shenzhen, South China's Guangdong Province is facing reconstruction and many of its villagers may be able to claim compensation worth tens of millions of yuan.

There were even reports suggesting that 1,878 villagers will become billionaires from the renovation of Baishizhou after Shenzhen authorities officially approved the reconstruction in December 28, 2018, but most of them are unlikely to get that much according to a report Tuesday by the China News Week.

A local villager who has signed a contract with the government said that the demolition area of his home is about 1,200 square meters, and he will get 15 sets of relocated houses after the reconstruction based on the compensation standard, said the China News Week.

However, this is not the same for everyone.

The head of a local company which is overseeing the renovation, Chi Weiqi, told the China News Week that 1,878 is the total number of local villagers, and the average property area of each household is about 500 or 600 square meters.

The number of villagers who have a demolition area of more than 1,000 square meters will not exceed 20 percent of the total, so the rumor of over a thousand billionaires generated by the reconstruction is not true, Chi said.

But the compensation from the demolition is apparently generous, said the media, quoting a staff member from a local real estate agency that the unit price per square meter of homes in Baishizhou is between 65,000 ($9,100) and 75,000 yuan.

The average price per square meter of the newly-built houses in Shenzhen is less than 50,000 yuan as of September, according to data acquired from Anjuke.com, a Shanghai-based online platform that serves many real estate information-based websites, on Tuesday.

Nevertheless, not everyone is happy about the change.

Newcomers to the city always make Baishizhou their first stop because of its cheap rents and convenience.

Official data shows that the original population of the four villages in Baishizhou was 83,000 but it has decreased to 28,731 as of September 10, said the report, adding that merchants and students in the village are the two groups most affected.

Although the working group of the reconstruction said the demolition does not involve dismantling schools and students will not be affected, it still means a significant increase in the cost of living and time for their family relocations, the report said.

"I used to earn thousands of yuan a day before, but now I cannot even make enough money to cover the rent as people are moving out," an owner of a clothing store in Baishizhou was quoted as saying in the report.

After the reconstruction, the area will be a compound community comprising houses, offices, schools and nursing homes, according to the Shenzhen government.