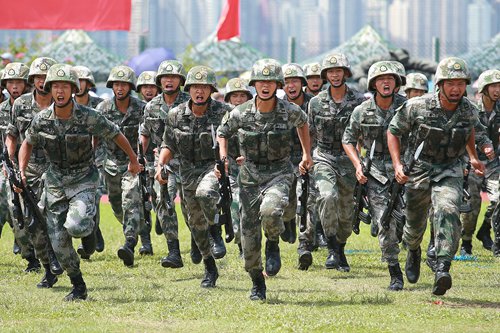 The commander of the Chinese People's Liberation Army (PLA) Garrison in Hong Kong on Wednesday condemned recent violence on the streets of Hong Kong and vowed to firmly safeguard China's sovereignty and national security.

In what appears to be his first public comments on the Hong Kong situation, Chen Daoxiang said that a series of violent incidents have seriously disrupted the Special Administrative Region (SAR)'s prosperity and stability and touched the bottom line of the "one country, two systems" principle.

"It is absolutely intolerable. We strongly condemn this," Chen told a reception in Hong Kong to mark the 92nd anniversary of the founding of the PLA, according to the website of the Ta Kung Pao newspaper in Hong Kong.

Coming at a delicate time in Hong Kong as violent protests continue to put the city's future at risk and as foreign officials continue to flagrantly interfere in China's internal affairs in Hong Kong, Chen's harsh words could be seen as a deterrent to anti-government forces in Hong Kong and their foreign supporters.

Adding to the commander's remarks, the PLA's Hong Kong Garrison also posted a video on its Sina Weibo account on Wednesday night and issued a statement, saying that it has the resolve, confidence and capability to safeguard Hong Kong's long-term prosperity and stability.

In the three-minute video, the garrison showcased their ability to carry out various missions, including urban riot control.  In just over two hours, the video attracted 3.1 million views.

One online user suggested that the video was a warning to the secessionists. "If you continue to make trouble, you will suffer the consequences," the user wrote.

The garrison's video and its commander's remarks come as violent protests continue to rock the major global financial hub and as speculation about whether the PLA's Hong Kong Garrison would get involved to help restore order in the SAR if the situation further deteriorates.

On Wednesday, Bloomberg News, citing a US official, reported that the PLA or armed police had been gathering on the Hong Kong border and that the White House was monitoring the situation.

Responding to the reported movement, Hua Chunying, a spokesperson for the Chinese Foreign Ministry, said on Wednesday she was not aware of the situation and criticized US officials' failure to denounce violence in the city.

"If the White House truly hopes for peace, stability and prosperity in Hong Kong, they should give advice to those violent protesters and radicals to express their demands in a peaceful rather than violent way," Hua said.

Chinese officials have harshly criticized foreign officials, including those in the US and the UK, for supporting violent protests in Hong Kong and meddling in China's internal affairs.

Chen's remarks at the reception inside the PLA Hong Kong Garrison's camp in Central district will likely further fuel speculation of the PLA's potential role in restoring peace and order in the city.

Asked about how the PLA would handle growing secessionist forces in Hong Kong at a press briefing in Beijing on July 24, Wu Qian, a spokesperson for the Chinese Ministry of National Defense, said that the military was "closely following" the situation in Hong Kong and referred to a law governing the PLA's Hong Kong Garrison.

The law states that the Hong Kong SAR government could request the central government to allow the PLA garrison in Hong Kong to help maintain social order and carry out disaster relief missions when necessary.

On June 26, shortly after violence erupted in Hong Kong, the PLA's Hong Kong Garrison conducted joint patrol exercises to examine combat capabilities in emergency situations and joint operations, according to the PLA Daily. The exercise draws much attention and fuels speculation.