CHINA Violence is not the way of solving problems in HK: Chinese diplomat

Violence is not the way of solving problems in HK: Chinese diplomat

The central government stands firm behind the Hong Kong SAR government, Ma Hui, minister of the Chinese Embassy in the UK, said in a recent interview with Sky News from the UK, adding that dialogue, compromise and consensus are the only way out while violence is not the way of solving problems. 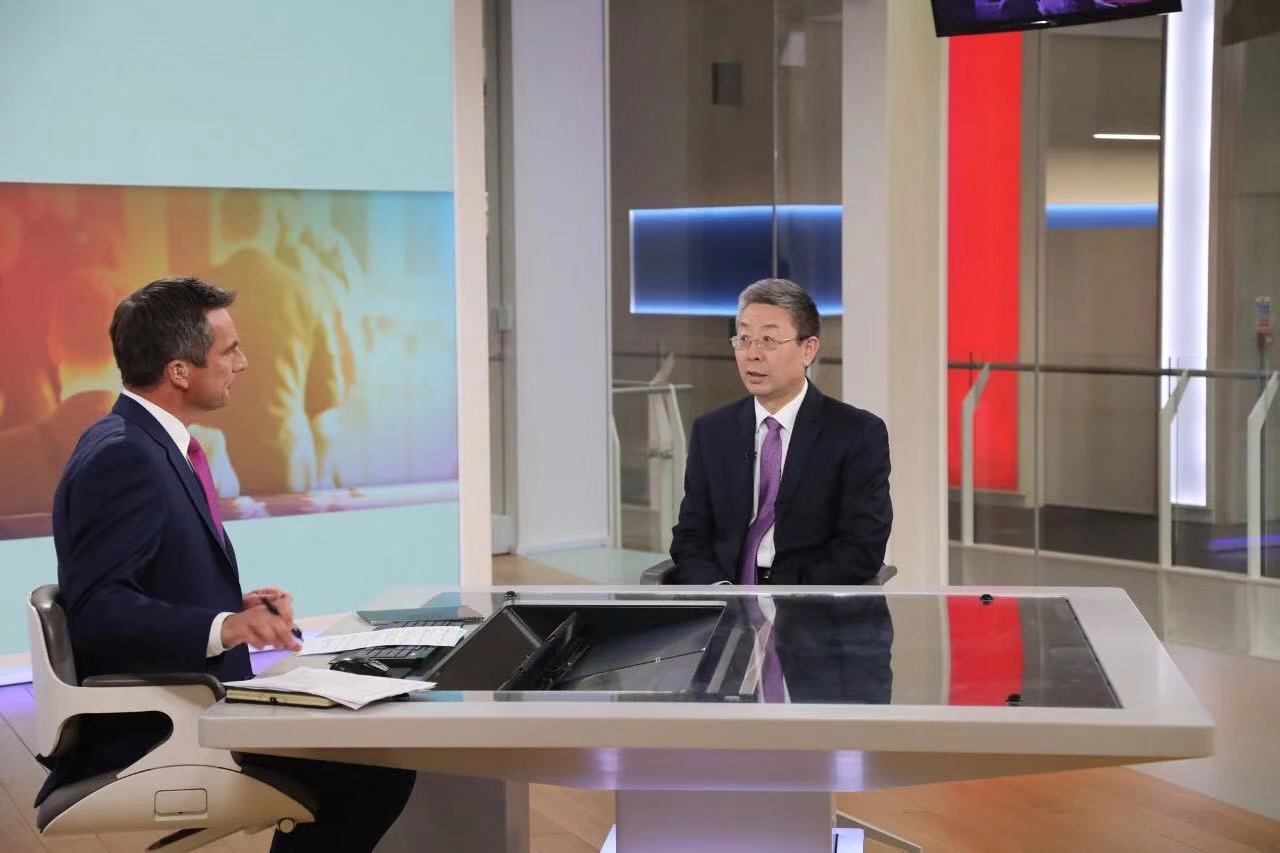 The transcript of the interview is as follows:

Samuels: Today, thousands of protesters formed a 28-mile human chain across Hong Kong. It’s the latest in a series of protests over eleven weeks that have seen escalating violence between pro-democracy protesters and police. So what's next for Hong Kong and China? Joining me now is Minister Ma Hui who is from the Embassy of the People’s Republic of China in the UK.

Thank you very much indeed for being with us on Sky News. These protests, this crisis, all began because of the introduction of an extradition bill, something the protesters are very concerned about. The Hong Kong government has suspended it. Can you tell the people of Hong Kong that it will be withdrawn as they are demanding?

Samuels: So you have no influence at all over the Hong Kong government?

Ma: I think it’s up to the Hong Kong SAR Government to decide it.

Samuels: But you don’t have any influence over their decision?

Ma: I can’t say we have no influence, because what we practice is “One Country, Two Systems”. Hong Kong exercises a high degree of autonomy with Hong Kong people governing themselves, but under the one China framework. We have to remember that it’s “One Country, Two Systems”, not “two countries, two systems”. "One country” is equally important to “two systems”. We cannot emphasize one to the neglect of the other.

Samuels: If it's down to the decision of Carrie Lam and the Hong Kong government, why are so many people protesting on the streets? Why are they saying that Beijing is encroaching on their freedoms?

Ma: I think there is a huge misunderstanding of the real situation. Actually the amendment of the ordinance does not violate the “One Country, Two Systems”, nor does it encroach on their rights. Of course there is a long story to tell about how the amendment came about. To amend the ordinance is to plug the loopholes in the Hong Kong legal system. Actually, it contributes to justice rather than the opposite.

Samuels: This is what one pro-democracy leader said. Martin Lee, QC: “All that Chinese authorities need is a witness statement, saying you committed some crime 20 years ago, that is enough. And then you'll be tried according to Chinese law in a Chinese court. Who can trust that system?” That is what the people are worried about. They are worried this extradition bill will mean that people are facing unfair trials in China.

Ma: First of all, will you and your colleagues stop labeling the people who joined the protests as pro-democracy protesters? Using the label doesn't represent the actual truth, because they are using the cover of pro-democracy to engage in violent, illegal activities. They ransacked the Legislative Council, attacked the Central Government’s Liaison Office in Hong Kong, defaced the national emblems and damaged the national flag. So they engaged in violence, illegal activities. You shouldn’t misuse the label.

Samuels: That is a very small minority. 1.7 million people marched on Sunday. I was there to see them. The vast majority were peaceful, law-abiding members of the Hong Kong society. The numbers involved in violence are tiny.

Ma: I admit that some of the protesters are peaceful.

Samuels: The majority, you have to say, the majority.

Samuels: Ok. Let's just go back to what you're saying about the violence involved because it is a small number of people who have been violent, but they say they are reacting to police brutality. This is what Amnesty International says. They say, “Hong Kong police have once again used tear gas and rubber bullets in a way that has fallen short of international standards. Firing at retreating protesters in confined areas where they had little time to leave goes against the purported objective of dispersing a crowd. Violence directed at police doesn't give officers a green light to operate outside of international policing standards.” They're saying that they're retaliating against a brutal police force.

Ma: It is very unfair to accuse the police of using excessive violence. The Police Chief in Hong Kong has already made it clear that if the protesters followed the law, if the protests were peaceful, if the police were not attacked or provoked, the police would have had no reason to use force. Even if they used force, it was the minimum level. I think Hong Kong police are very restrained compared to international standards. So we should find out who actually started the violence and who provoked the police, rather than accuse the police who is the symbol of rule of law. They are merely enforcing the rule of law.

Samuels: That is something often very difficult to ascertain during those protests. I want to just play a short extract of the speech given by the Ambassador talking how China might respond to the protests. Let’s have a listen.

Ambassador: Should the situation in Hong Kong deteriorate further into unrest uncontrollable for the Government of the Hong Kong Special Administrative Region (SAR), the Central Government would not sit on its hands and watch. We have enough solutions and enough power within the limit of the Basic Law to quell any unrest swiftly.)

Samuels: He talks about quelling unrest quickly. What does he mean by that? What tools could be used, because we have seen troops massing on the border with Hong Kong? Could you ever see a situation where live ammunition could be used on the island of Hong Kong by troops?

Ma: What is happening in Hong Kong now is very obvious. Apart from some peaceful protests, some people have engaged in violent criminal activities. If the violence and the disorder continues, it will harm the interests of Hong Kong, harm the livelihood of the Hong Kong people, and also harm the interest of international businesses. So the position of the Central Government is very clear that if the situation continues to deteriorate and become uncontrollable for the Hong Kong SAR Government, the Central Government will not sit on its hands. If you read the Hong Kong Basic Law and the Garrison Law, you will find your answer.

Samuels: So the troops could effectively go into Hong Kong, if it's thought that it is necessary.

Ma: The Chinese government’s position has been very clear. You will find your answers in the Basic Law and the Garrison Law.

Ma: When the situation arises, the Chinese government and the Hong Kong SAR Government will find a proper solution to quell the unrest swiftly.

Samuels: If that means live ammunition, then?

Ma: That is what you said. That is a highly hypothetical question. I can not possibly comment on it.

Samuels: I want to talk about Simon Cheng. He is a Hong Kong citizen who works for the British Consulate. He had been across the border into Shenzhen on business and was returning home to Hong Kong when he was detained. Do you know what the situation is now regarding him?

Ma: I think now the situation is very clear. The media including Sky News have reported what has happened to this person. First of all, he is a Chinese citizen and he violated the public security law on the Chinese mainland. Now he is dealt with according to the law. Everyone is equal in the eyes of the law.

Samuels: There have been talks he was arrested for prostitution? Is that correct?

Ma: You read the same report as I read.

Samuels: The only reason I’m asking is that if he was on a high speed train going from Shenzhen to Hong Kong, how could he be visiting a brothel unless there’s one on the train?

Ma: This is essentially a public security issue. I don’t have all the specifics, but the information we have is that he violated public security law and was dealt with according to the law.

Samuels: I don’t know if you’ve seen this statement coming out recently from the Foreign Office. They are saying that they’re changing their travel advice for people traveling to Hong Kong. This is what they say: “In light of ongoing protests and demonstrations in Hong Kong, there are reports of greater scrutiny from mainland authorities of border crossings between the mainland and Hong Kong. You should be aware that the threshold for detention and prosecution in China differ from those in Hong Kong.” What do you make of that?

Ma: Certainly, sometimes we do things differently. You drive on the left, we drive on the right. But I guess the Chinese authorities will, of course, act in accordance with the Chinese laws, and they have responsibility for safety and public security. The travel advice from the UK Foreign Office clearly shows that the situation in Hong Kong is worrying. If violence and disorder go on, it will affect Hong Kong’s economy, the livelihood of the Hong Kong people, whose daily lives will be severely affected. So the majority of the Hong Kong people, the mainstream public opinion of in Hong Kong is that normalcy must be restored, order should be restored. So let's hope that violence will come to an end as soon as possible.

Ma: About thirty countries have issued travel advice regarding Hong Kong, which means that the violence in Hong Kong is affecting the safety of travelers and tourists. I learned that tourists from the Chinese mainland were molested, and two were detained and attacked by protesters at Hong Kong international airport some days ago. As for inspection at the borders, I strongly believe that China is a country under the rule of law and the authorities will act in accordance with the law.

Samuels: How do you think this is all gonna to end? It's been ongoing now for some time. What's gonna happen next?

Samuels: There’s a stalemate. The protesters I spoke to over the weekend said there is no way they’re going to back down and they will carry on their fight. The Hong Kong government has said that it’s not going to back down. So far, Carrie Lam certainly hasn’t said that she’s going to scrap this bill altogether. You’ve made it very clear that Beijing is standing firm. Something has got to give?

Samuels: Finally, do you have any sympathy at all with the peaceful protesters?

Ma: Peaceful protest is never a problem in Hong Kong. We support “One Country, Two Systems”.

Samuels: Do people on the Chinese mainland have the freedom to protest?

Ma: On Chinese mainland, Chinese people also are guaranteed the right to protest and assembly. But in the meantime we stress stability a lot. China has benefited hugely from stability and the people cherish this stability. That’s why when the riots happened in Hong Kong, the people on the mainland are very concerned. Without stability, you can achieve nothing. Stability is of high importance to all of us, the Chinese mainland and Hong Kong, maybe the UK. Dialogue is the only way to solve it.

Samuels: Thank you very much.