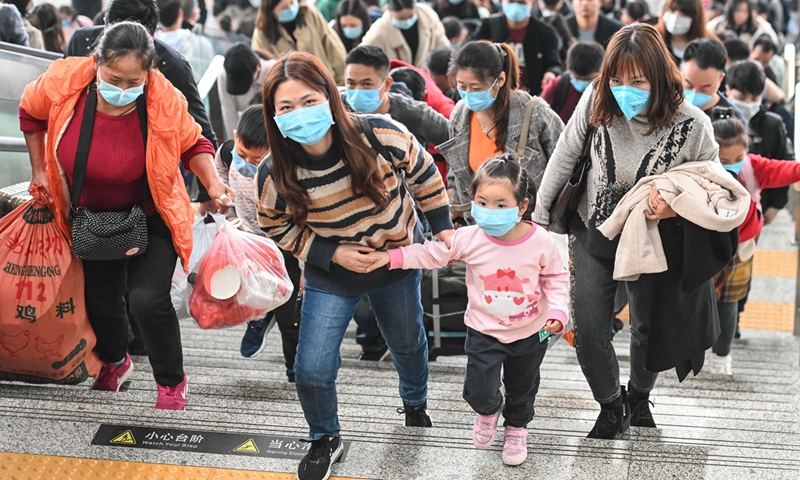 During the 2020 Spring Festival travel rush, many passengers wearing medical masks to protect themselves from the Wuhan novel coronavirus leave a platform of the Guangzhou South Railway station, a railway hub of Guangzhou, South China's Guangdong Province, on January 22, 2020. (Photo: CNS)

The World Health Organization (WHO) is scheduled to convene a special meeting in Geneva, Switzerland on Wednesday to discuss whether the epidemic caused by a novel coronavirus detected in China and now spreading across the world should be declared a global emergency.

A total of 17 people on the Chinese mainland have died from the pneumonia-like disease associated with the mysterious virus and there are 549 confirmed cases of infection, according to latest data update provided by Hubei authorities on Wednesday night.

Reports suggested one confirmed case in Japan, three in Thailand and one in South Korea as of Wednesday morning.

The US Centers for Disease Control and Prevention also announced Wednesday its first confirmed case of the novel virus.

A Beijing epidemic prevention expert who requested anonymity told the Global Times Wednesday that WHO was "very likely" to suggest travel restrictions for China, especially the Central China city of Wuhan, where the virus is believed to have originated.

Some netizens have called for sealing off Wuhan of Central China's Hubei Province from the outside world, but experts said blocking transportation to a hub city of 10 million people was impractical, especially as the coronavirus has already spread beyond the city borders.

The best way might be a partial blockade within the city, he said.

"Hospitals and residential communities where patients are concentrated could be temporarily quarantined, just like the action taken during the 2003 SARS epidemic."

The Central government's concern about the virus is at its highest since the end of SARS, he noted. A lack of clear knowledge about the deadly virus delays the creation of an effective vaccine and there is no simple template from which to draw, the expert said. A global effort is needed to speed up vaccine development.

A WHO global emergency, known as a Public Health Emergency of International Concern, is defined as a health risk to another state that potentially requires a coordinated international response. Declaring such an emergency does not mean a travel or trade ban, but rather financial and medical help.

China has launched a string of measures and strengthened international cooperation and information sharing to lower the risk of cross-region and cross-border spreading of the new coronavirus, the national health authority said.

Ever since the coronavirus pneumonia outbreak, the Chinese side has been adhering to an open, transparent and highly responsible attitude toward world health security, and has taken the initiative to promptly share relevant information with WHO and countries and regions such as Russia and China's Hong Kong, Macao and Taiwan, Li Bin, deputy head of the National Health Commission (NHC), said at a press conference Wednesday in Beijing.

As of Monday, relevant pieces of information have been disseminated 15 times. The Japanese and South Korean embassies in Beijing have confirmed with the Global Times such exchange.

Chinese health authorities have also invited WHO experts to Wuhan and conduct an on-site probe of the disease  to deepen understanding and enhance cooperation to deal with the epidemic, Li noted.

Embassy of Thailand in China confirmed with Global Times reporter on Wednesday of receiving the letter from China's National Health Commission, containing information on updated measures and treatment to tackle the menace of the pneumonia outbreak.

The US embassy in China has yet to comment on the issue.

So far, four meetings have been convened between Chinese experts and representatives of the WHO. Chinese health authorities have also invited WHO experts to visit Wuhan and conduct an on-site probe on the disease, in order to deepen understanding and enhance cooperation to deal with the epidemic, Li noted.

Medical staffs swear in as members of "assault team" in the fight against the novel coronavirus-related pneumonia in a hospital in Wuhan, central China's Hubei Province, on Wednesday. Photo: Xinhua

The NHC is also continuing close exchanges with global counterpart agencies, including the ones in the US, Thailand, Japan, and South Korea, as well as their embassies in China, to share disease-related information and verify information on suspected and confirmed cases.

The NHC also provided Hong Kong and Macao special administrative regions with free diagnosis toolkits, besides inviting experts from the regions to medical facilities in Wuhan in a bid to share details of the disease.

To prevent the epidemic from spreading further, the Wuhan government urged people outside Wuhan to avoid traveling to the city and discouraged Wuhan residents from traveling outside, as reducing human migration can decrease the transmission of the virus.

In provinces that have reported confirmed cases, health authorities are determining, reporting, quarantining, diagnosing, and treating the patients with utmost urgency, including allocating medical resources to strengthen the treatment of patients, tracking close contacts with the patients and taking related bio-safety measures.

In provinces with zero reported cases as of yet, the authorities are optimizing contingency plans, preparing extra ambulances, wards, experts, medicines, test reagents, disinfection and prevention items as well as prevention and emergency response teams, while also training medical staff members and public health personnel to competently handle the epidemic once it hits. 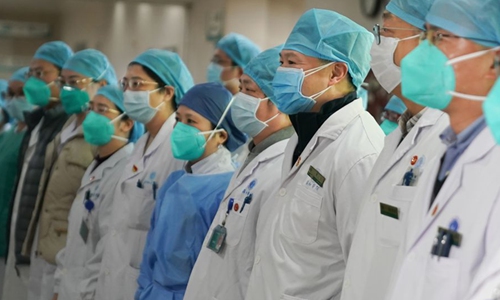 According to the data on Wednesday 544 cases of infection have been confirmed and 17 deaths have been reported, up by over 200 from Tuesday night with number of 309.

This sudden rise in confirmed cases is due to an improved and effective diagnosis mechanism that has been dispatched across the country, Li the NHC deputy chief noted.

"It takes time to develop and produce the reagent of the virus detection, which has only recently come out, so the sharp increase in cases in the past two days is mostly the confirmation of previous suspected cases," the Beijing-based expert said.

In response to media inquiry that a UK research institute put the number of infected people in China at around 2,000, Gao Fu, head of the country's disease control and prevention center, said at the media event Wednesday that he had read the calculation result of the scientist and the figure [put forward by the scientist] is the largest in the interval he worked out.

"To learn anything new, especially about a virus like this, study must be based on a concept of 'facts are facts, theories are theories.' We welcome people to come up with models, and there are many models out there. However, is such a model consistent with the facts? Based on what we have known so far, it is not the model that the scientist calculated," Gao said.

The Wuhan health authorities and government has been criticized online for failing to contain the coronavirus in late December. Some have said information about the virus and the pneumonia was not promptly released by the Wuhan government to experts and media.

Wang Hongwei, a professor at Renmin University of China's School of Public Administration and Policy in Beijing, told the Global Times that local government must disclose information in a timely and authoritative manner, which is crucial to maintain their credibility in an emergency. Besides the epidemic situation, public opinions must be carefully handled.

Despite criticism of neglect of duty, Wang said the government's cautious action was understandable.

"It is hard for Wuhan government to strike a balance between releasing timely transparent information and at the same time not causing too much public panic during the Spring Festival," said Wang.

The governments' response to the coronavirus was "much improved" compared to response to SARS in terms of medicine, social management and public voices, Wang said.

Tongji Hospital affiliated to the Tongji Medical College of Huazhong University of Science and Technology in Wuhan has issued guidance for quick diagnosis and treatment of the novel coronavirus-caused pneumonia, a first in the country which is based on the firsthand experience in the city.

The natural original host of the novel coronavirus is likely to be bats; however, the intermediate host of the virus is yet to be identified. The guidelines highlight fever as the primary symptom of the disease.

Pneumonia caused by the novel coronavirus is a brand new epidemic to which the general public lacks immunity, and it is especially contagious for those with poor immunity such as the elderly people and pregnant women. There is no particularly effective cure to the disease, it said.

Those declared fit need to undertake a two-day test before being discharged from hospital and those who have been discharged should be checked on a regular basis and stay in quarantine for a while, it proposed.