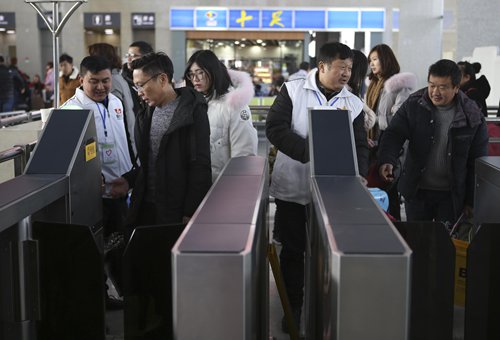 High-speed train passengers have their faces scanned at the barrier gates of a station in East China's Zhejiang Province so they can enter. (Photo: VCG)

Endless queues and long waits at the ticket inspection desks at China's major train stations were signature of the Spring Festival travel rush before this year. Every year, as the country's biggest national holiday unfolded, a huge flow of travelers would leave staff at the check-in desks feeling swamped.

But with the installment of artificial intelligence (AI) in dozens of train stations this year, including a facial recognition system which is able to process passenger identification within five seconds and therefore speed up the waiting process, busy scenes started to become something of the past.

When a passenger approaches the camera inside the facial recognition system at the station, it scans their face and then quickly compares it to the photograph shown on their identification card in real time. If the information matches, the barrier gates will open and allow the passenger to go through.

Such use of facial recognition technology is in line with discussions heard at the recent two sessions meeting, a key annual political event, which focused on the widespread application of a security network named Tianwang ("Sky Net" in English) currently being used by China's public security department.

The network, according to reports by the People's Daily, has the potential to recognize the facial features of anyone in the world and match them on the spot with photographs on a database of criminal suspects. In fact, it can analyze photographic identity so quickly that it can scan every single Chinese face on the planet in just one second, and it would only take two seconds to scan every face in the world, with an accuracy rate of up to 99.8 percent.

Those are just two examples that highlight the development of Chinese visual AI technology, which industry insiders predict could contribute to robust growth in the global technology sector this year.

"The year 2018 will mark a fast-track year in facial recognition technology, whose speed of growth is likely to override other AI sectors including robotics, voice recognition and natural language processing," Yang Yuxin, the vice president of Beijing-based operating system provider Thundersoft Software Technology Co, told the Global Times on Wednesday.

An industry report published on news website sohu.com in March echoed Yang's prediction by summarizing the financing of China's AI start-ups and concluding that the computer vision and image analysis sector has been the "hottest" destination for domestic investors lately.

The sector has even topped the country's investment list with a financing amount of 14.3 billion yuan ($2.27 billion), representing 23 percent of the total funds flowing into the global AI industry.

One of the reasons behind the popularity of AI-powered visual technology is the wide range of scenarios in which it can be applied, making it easier for investors to "envision a bright business prospect and quickly capitalize on their investment," Yang explained.

Security is just one of many areas where visual technology is being applied. In addition to targeting consumers, AI start-ups have already started to tailor their visual technology services to domestic companies focused on such technology as unmanned vehicle-makers and manufacturing.

For example, Thundersoft has partnered with local factories to facilitate the application of AI visual technology in production lines so as to maintain quality control and supervise the production environment, Yang said. The move has helped manufacturers reduce labor costs and improve efficiency.

In unmanned supermarkets, which are part of the new retail concept, visual technology can help capture and analyze consumer behavior, through which, companies can improve their store's setting and displays to attract more buyers. Adopting a facial recognition system could also prevent shoplifting and help analyze consumer data.

With market players deeming those technologies as promising, they have in turn pumped up the number of start-ups in the sector. Currently, there are 146 visual AI technology companies in China, the biggest number of any type of AI firm across the country, the news report by sohu.com showed.

But analysts do not expect all those start-ups to thrive.

"I think an industry reshuffle will take place next year… the clock is ticking and visual AI start-ups that focus on researching basic algorithms should scramble to find applications, otherwise their capital pool will dry out in 2019," Yang noted.

Taking into account the abovementioned scenarios and China's large amount of data, the nation has an edge over US rivals in terms of AI visual technology application. However, in terms of the industry's foundation, such as basic theory and algorithms, domestic companies are still catching up with the standards set by foreign competitors, Lu noted.

But recent mergers and acquisitions (M&A) inked between Thundersoft and European peers may offer some insight into Chinese companies that are aiming to introduce cutting-edged AI technologies.

Thundersoft, for example, announced on Thursday that it has acquired Bulgarian software provider MM Solutions AD (MMS) in a deal worth 31 million euros ($38.16 million).

"Acquiring MMS will largely reduce the time we take to achieve new technological breakthroughs, which in turn will elevate our technological competitiveness… It's like strengthening our innovation ability through external dynamics," Zhao Hongfei, CEO of Thundersoft, said.

Asked why Thundersoft has been eyeing European firms recently, Yang explained that compared with the US, European AI start-ups can be seen as "unexploited gold mines" with long-term business prospects and market competitive M&A prices.

"Most European firms have rich experiences in developing technology, they also have a very strict system when training talents," Yang said.

By this, Yang was referring to the fact that it can take about 18 months for MMS to fully train a visual technology engineer. In contrast, the training period is generally six months in China. Yang also noted that after the MMS deal was completed, he would send some employees from Thundersoft to MMS for further training.

Furthermore, the European capital market has not been developing as fast as either market in China or the US, meaning it is usually a great bargain when Chinese investors acquire European tech peers.

"We bought the two European tech firms at a price that was less than ten times their price-earnings (PE) ratio. The price has to be at least twenty times the PE ratio here in China," he added.