CHINA Vital waterway gets another chance

Vital waterway gets another chance 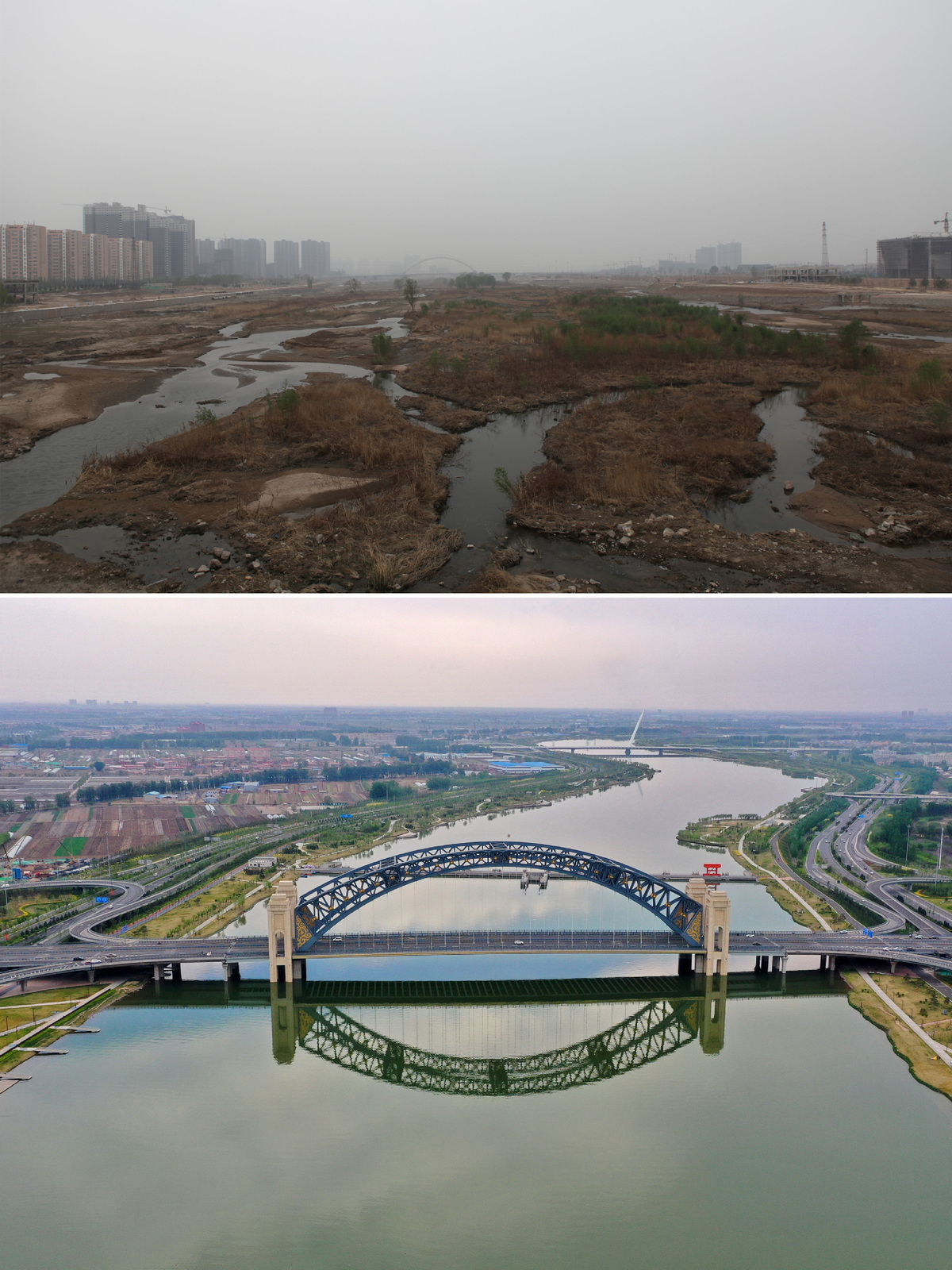 The dried-up Fenhe River in Taiyuan in 2011. Above: The same section after the completion of cleanup work. (Photo: Xinhua)

Wang Guishuan, a 68-year-old villager from Shanxi province, has lived near the source of the Fenhe River all his life.

He used to farm and raise poultry on land above the river's source, but a project to protect the headwaters took in that land. So, two years ago, Wang moved to farm on land below the source and joined efforts to keep the river free from agricultural pollution.

Hailing from Ningwu county, Xinzhou, he is just one of many people who are helping protect the river.

Known as the "mother river" of Shanxi, the 713-kilometer Fenhe, the second-largest tributary of the Yellow River, originates on the northern slopes of Guanceng Mountain in Ningwu county. It meanders through Shanxi before entering the Yellow River in the southwestern county of Wanrong.

The Fenhe, which passes through the Taiyuan and Linfen plains, is one of the main water sources for agriculture, industry and more than 32 million people in the province.

It was, however, once heavily polluted.

Last year, it was described as a "severely polluted" tributary by President Xi Jinping when he delivered a speech about improving the environment and protecting the Yellow River Basin's ecosystem.

Yuan Jin, an environmental science professor at Taiyuan University of Technology's College of Environmental Science and Engineering, said: "Shanxi has a severe shortage of water. Some of the main channel and tributaries of the Fenhe River once dried up as a result of overuse."

Self-cleaning is a major way for rivers formed naturally to improve their water quality. When more water flows in, the amount of sewage is reduced and the rivers become cleaner.

However, Yuan said that because of limited water resources the ability of the Fenhe to self-clean is poor.

Explaining why pollution occurred in the past, he said: "There was no runoff and the river dried up. The only flowing water was sewage discharged from production processes."

He said that with Shanxi relying heavily on the Fenhe for daily industrial and agricultural use, a significant amount of sewage was discharged into its waters.

To improve the river's water quality and prevent poor-standard water entering it, joint efforts have been made by the authorities, residents and enterprises on its upper, middle and lower reaches.

He also urged that different measures be adopted to match local conditions.

As a result, action has been taken in different areas of Shanxi to improve water quality and protect ecology and the environment. 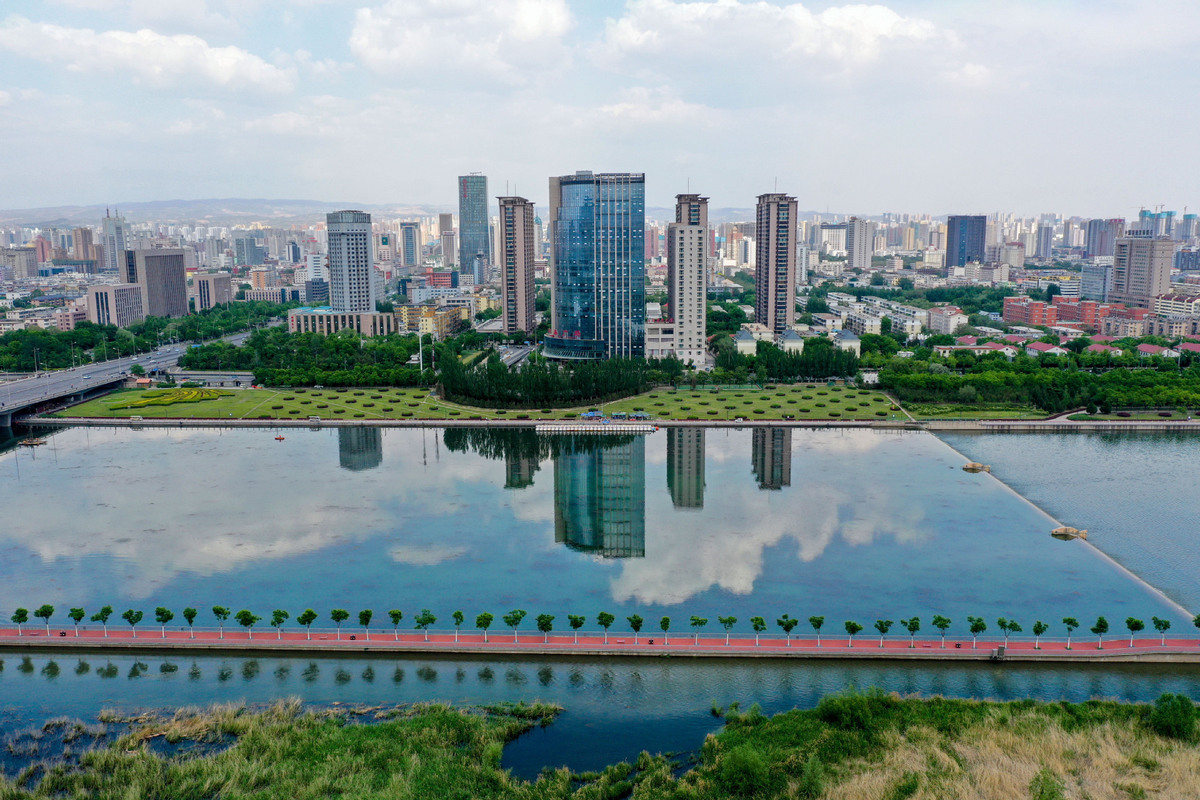 The Fenhe River flows through Taiyuan, capital of Shanxi province.

On the upper reaches of the Fenhe, restoration projects have been carried out to preserve water and soil. The work has also reduced environmental damage, ensuring supplies of clean water for people living on the middle and lower reaches.

In 2017, Wang, the villager who moved, opened a homestay, which has gradually received a rising number of tourists.

Wang moved as part of the city's environmental restoration projects. In 2018, the work to protect the upper and middle reaches of the Fenhe was selected as one of the national trial programs to restore the ecosystem, with the local project receiving 4.9 billion yuan ($721.8 million).

Projects carried out in Ningwu and Jingle counties, Xinzhou, included restoring the environment in and alongside the river, establishing a wetland park, greening the banks and mountains along the waterway, protecting biodiversity and restoring water sources, according to the Xinzhou municipal government.

A national wetland park－Fenhechuan National Wetland Park－in Jingle county was one of the projects. The park was established to prevent water loss and soil erosion, restore the wetland ecosystem and improve the environment.

Work on the park began in 2014, and last year after it passed an inspection by the National Forestry and Grassland Administration, the venue started to steadily attract visitors.

Covering nearly 600 hectares, the park includes 18 villages. Trees have been planted along the banks of the Fenhe to prevent water loss and soil erosion, and some 33 hectares of farmland have been restored to wetland.

Li Quanquan is one of the village farmers who have become rangers at the wetland park.

The 64-year-old patrols the park every day to check for fire hazards, prevent people shooting birds and stunning the fish with electrical equipment.

In May, Li ordered a man he found stunning fish to leave. "I told him the area was now a wetland park and catching fish was against the law. The man drove away," he said.

Sacrifices have been made by the county authorities, as closing businesses to protect the environment means they receive less tax revenue.

But one county official described such measures as "a good call and a sustainable decision".

Wang is setting his sights on boosting the local economy through tourism.

"Tourists from nearby cities, such as Taiyuan (the provincial capital), have started to arrive during weekends, even though the park is not fully open to the public," he said.

The park is about a 90-minute drive from Taiyuan.

Water quality at the Fenhe's source and at the wetland park has remained at Grade II, the second-highest level on the national five-tier water quality system.