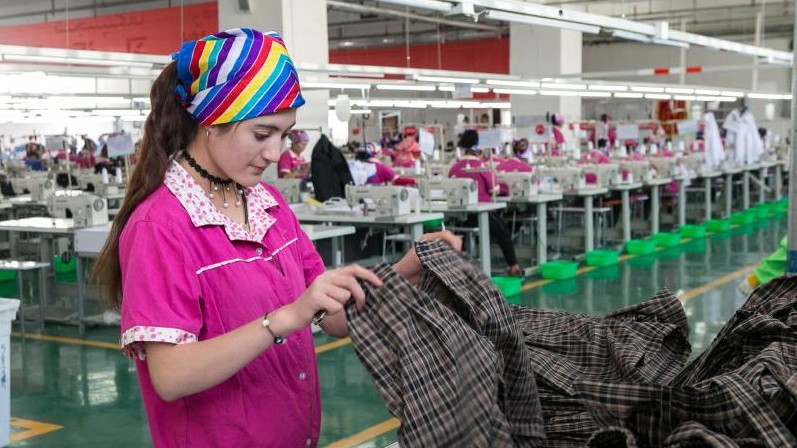 Vocational education and training center graduates in northwest China's Xinjiang Uygur Autonomous Region have refuted accusations of "genocide" in the region, saying the centers have saved them from religious extremism and helped them live better lives.

They shared their personal stories, telling the experiences of how the quality of their lives has been improved after they learned vocational skills at the centers at a press conference held in Urumqi, Xinjiang's regional capital, on Saturday.

"The vocational education and training centers provided free meals and clean dormitories to us. We had multiple courses, and I learned sewing," said Patigul Husan, a former trainee from southern Xinjiang's Kashgar.

Patigul said: "After I graduated, I opened a small supermarket. In the meantime, I also help villagers design and make clothes with the skills I learned in the center. I can earn about 3,000 yuan ($469) per month now."

"My family used to be poor, but I was inconsiderate of the difficulties my family was facing. Later, I was influenced by extreme religious thoughts. I started to reject people of other ethnic groups and even got involved in criminal gangs," said Mardan Adil, a former trainee from southern Xinjiang's Aksu.

But things changed after Mardan went to a vocational education and training center. "I took the hairdressing course and opened a barbershop after I graduated. Now, I can earn over 5,000 yuan ($781) every month," said Mardan, adding that: "I also have apprentices, who have stable salaries."

Another graduate from Aksu named Zulpiya Yasin said some religious extremists used to tell her that Han people are infidels, and Muslims are prohibited from living in the houses provided by the government, neither can they use the money given by the government. She believed them and all she thought was about martyrdom.

Zulpiya's mother persuaded her to go to a vocational education and training center in 2018. In the center, she learned laws on counter-terrorism, standard spoken and written Chinese, as well as computer skills.

After graduation, the young woman now works in the village committee and often organizes cultural and sports activities for villagers.

"I know some Western media said that we trainees had been tortured and women had been raped in the centers. Such accusations are fabricated. They'd never visited the centers, neither did they talk to us," said Zulpiya.

"Look at me, do I look like I was tortured? Their fabrications might deceive others, but not us," Zulpiya added.

From June 4 to 7, a London-based "Uygur Tribunal" held hearings on genocide accusations in Xinjiang. Also, at the press conference, Xinjiang regional government spokesperson Elijan Anayat has condemned the "tribunal", calling its "hearings" or "trials" poor performance by anti-China forces.

"Facts have proved vocational education and training in Xinjiang has eliminated the breeding ground for terrorism and religious extremism to a large extent, effectively guaranteeing the rights to life, health, and development of people of all ethnic groups in Xinjiang," said Elijan.

Some in the West have accused China of setting up "re-education camps" to detain millions of Uygur Muslims in Xinjiang.

Back in 2019, China issued a white paper on vocational education and training in Xinjiang. It said these centers are established in accordance with the law and can ensure social stability and regional security in Xinjiang. Trainees at the centers learn standard spoken and written Chinese, understanding of the law, vocational skills, and deradicalization.

Officials said all trainees graduated from the centers by the end of 2019.