Volunteer narrates flicks so the visually impaired can feel the action 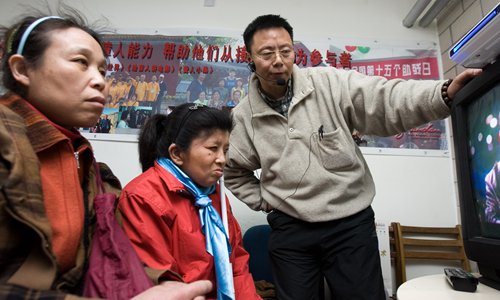 Wang Weili narrates a film to non-sighted audiences in his cinema in Beijing. Photo: Li Hao/GT

For a lucky few non-sighted people in Beijing, Saturday is film day in a courtyard cinema in Xicheng district. The cinema, opened by Wang Weili, a Beijing local, 12 years ago, is China's first cinema for blind people, according to media reports. Instead of forbidding people from speaking during screening, it requires someone to speak very loudly. Most often it's Wang in his 50s, doing the talking. He acts as a narrator to "depict" the films through a loudspeaker for the visually impaired audience. The cinema, named Xinmu (literally meaning to see through the heart), is a way to "let blind people immerse into society as robust people," said Wang.Statistics show that there are more than 6 million blind people in China. A great many of them reportedly live far outside mainstream society. A lack of basic amenities keeps them shut-in. At his cinema, Wang provides a platform where his audience can enjoy the pleasures of visual arts and the films give them a greater understanding of society. "I feel my efforts pay off when the films successfully resonate with the audiences. Films can bring them awareness of emotions and life," he told Talk to Her, an interview program. A film narrator Wang first started narrating films in 2004. He had bought a DVD of the American sci-fi film Terminator, and just as he was about to watch it at home, a blind friend came for a visit.The man told Wang that he never had sat through a film or a TV show. When his family members watched TV at home, he would sit in the yard listening to the wind.  On a whim, Wang invited his friend to sit with him as he narrated the action movie. Although he stumbled through some of the action scenes, his guest surprised him."I kept watching him. I noticed a big bean sweat appear on his nose but it wasn't at all hot. He was nervous. But why was he nervous? Because he could understand what I was describing," said Wang. The friend was so excited that he hugged Wang, telling him that it was his happiest day in more than 30 years. "I was so shocked because I suddenly realized that blind people can see films in their mind's eye," Wang said.   Since then Wang developed a special connection with blind audiences. He shut down his business and founded the NGO Hongdandan Cultural Communication Exchange Center with his wife, Zheng Xiaojie. They rented a courtyard to open the cinema. Wang says he had to learn some special techniques to narrate films. He recalls the time he finished narrating The Message, a spy movie, a woman came to him saying that the film made her uncomfortable.She cited a scene where a character was tortured and pushed from one side to another. "As people who are able to see we wouldn't have found that part horrifying, but it disturbed the blind people very much," said Wang.  He later found that when listening to "visuals" the audiences often find the beautiful scenes charming but the scary parts become more intensely horrifying to them. "Without referencing objects and only depending on imagery, all the sensory depictions are amplified," he said. Despite relying on auditory descriptions and imagination, blind people also rely heavily on sense of touch, according to Wang. So, in narrations, he often uses things they can touch to draw an analogy. "If you described a cloud in the sky as looking like a flock of sheep, they won't be able to understand as they've never seen a sheep. So, you need to say the clouds are like cotton," he explained. Lifetime mission  Due to a lack of funding, the equipment Wang uses at Xinmu is quite shoddy. In a 30-square-meter house, there is one television set, a DVD player, a loudspeaker and about 30 chairs. But this doesn't dampen the audience's enthusiasm. Since it was established, Xinmu has welcomed thousands of visually impaired moviegoers and showed hundreds of films. The cinema has also become a regular gathering place for blind people. Zheng said blind people really want to communicate with sighted people and to feel like they are part of society. "Through the film activities they gradually gain understanding of the outside world, and began to pay attention to their appearance and dress more neatly," said Zheng. "The most important role for our cinema is to provide a communication platform for visually impaired people," Wang said. Wang's parents never supported the couple's decision to open their cinema. Later other agencies tried to persuade them to make money from their film nights, but they refused. They support their little theatre from their own savings and generous donations. Wang said more than 500 volunteers from all walks of life have come to the cinema to narrate films, including some renowned CCTV anchors. He said they need more young people to join them to help narrate films."I see the same kind of hope on the faces of the audience. This is their unspoken word, reserved in their heart. It's something they will never speak out," he said.