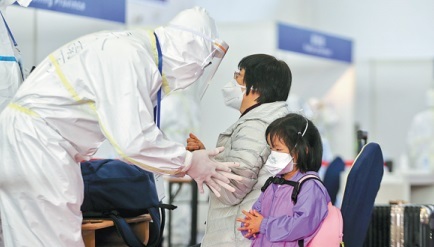 A staff member demonstrates how to clean hands properly on March 25 at the New China International Exhibition Center, where inbound travelers are gathered and sent to various designated centralized quarantine sites in Beijing. (Photo: China Daily)

During the SARS outbreak in 2003, Liu Qing was repeatedly told by her mother not to go out.

"For the first time in my life, I knew what death meant, but I was not too scared because I knew I was protected," said Liu, who at that time was a second-grade student in Beijing, one of the cities hit hardest on the Chinese mainland by the outbreak.

Now a postgraduate student at the University of Science and Technology Beijing, Liu, 25, became a protector of sorts, helping to shield others from the novel coronavirus pandemic.

Liu was one of the students who volunteered at the China International Exhibition Center that has received inbound travelers to Beijing Capital International Airport.

She and 29 others from the university worked there from March 23 to 29, distributing materials, collecting information and translating for foreign travelers.

Their work stopped after authorities redirected all inbound flights scheduled to land at the Capital airport to 12 other designated airports starting March 23.

"Putting on a protective suit, two gloves, feet covers, a head cover, a pair of goggles and two masks for the first time, I felt like I had become one of the front-line workers fighting the outbreak," she said.

The masks made it hard to breathe, and the goggles became very foggy, so she could not really see the travelers clearly, she said. However, her sense of duty outweighed her discomfort.

"I was born and raised in Beijing, and I feel very proud to contribute to protect the city I love."

Su Dong, a teacher at the university and head of the volunteers, said all students are Beijing residents and they all had decided to volunteer soon after hearing about recruitment.

The students took three shifts at the center, from 6 am to 1 am the following day. Each shift lasted six to seven hours, and during the shift they could not eat, drink or go to the bathroom, he said.

The volunteers at the university had taken over for three teachers and 30 students from Beijing International Studies University, who had volunteered at the center from March 10 to 22 and had received 438 foreign travelers from 42 countries.

Zhang Yifan, a third-year undergraduate student at Beijing International Studies University, said he signed up for the work as soon as he heard that the school was looking for volunteers.

He said he was responsible for distributing materials, collecting information and answering travelers' questions.

"The work was harder than I had imagined as it is very uncomfortable to wear the protective equipment, yet it was worthwhile because we were offering help to people in need," said Zhang, 20.

"Every day there were people who were crying or became very anxious because they had not eaten anything during the trip to Beijing, or couldn't find their suitcases, or they got separated from their loved ones," he said. "We were there to offer them much needed company and comfort."