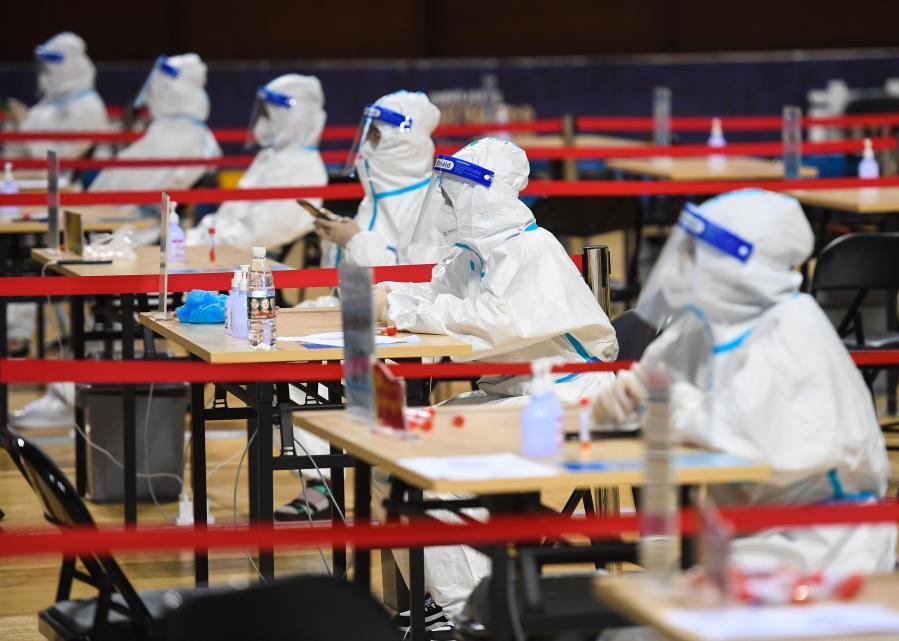 If the COVID-19 pandemic had not happened, Dai Ziwei would have had a large, flower-bedecked wedding in Yangzhou, Jiangsu province, last Wednesday.

Instead, the 25-year-old village committee worker in Yangzhou's Guangling district, spent her wedding day in the office collecting and analyzing virus prevention and control information regarding local villagers.

Her husband, Huang Weixin, 23, also worked the whole hot summer day as a volunteer at a sample collection site for nucleic acid tests and helping direct traffic at several intersections.

Huang, who is employed by the command and dispatch center of Touqiao township, has been working continuously since late July, when the Delta variant of the novel coronavirus ravaged the popular tourist city.

"We made a plan for holding our wedding before we finally decided to drop it, though for months we looked forward to an impressive wedding to mark one of the most important days of our lives," Huang said.

Dai and Huang were primary school classmates. They kept in touch during middle school and fell in love years later when they both worked in the township.

In April, the couple booked an elegant hotel wedding venue, sent invitations to relatives and friends and were overwhelmed with joy when they learned they would become parents.

"But the pandemic changed our schedule. After talking, we decided we wouldn't hold a wedding ceremony or ask for marriage leave," Huang said.

On their wedding night, they had a simple dinner at home with their parents, and the next day got up early for work.

"We'll continue working with our colleagues until the virus is under control," said Dai. "When it's finished, I'm going to have that belated wedding ceremony in the beautiful white dress I have dreamed about since I was a little girl."

Like Dai and Huang, more than 70,000 volunteers have participated in work to contain the virus in Yangzhou, which has registered 394 locally transmitted cases since July 20.

During that period, the provincial capital Nanjing has reported 233 locally transmitted cases. Thousands of volunteers have toiled alongside healthcare workers and government employees to curb the spread of the virus in the city of more than 9.3 million people.

Ma Weizhen, a retired woman who lives in Nanjing's Jianye district, has done volunteer work in a quarantined community for two weeks.

The work is not easy for a 66-year-old. She once spent a whole day visiting seven hospitals to buy the medications residents urgently needed. Because of the quarantine, more than 3,000 residents of the Jiqing Jiayuan community, have had to stay in place and have been unable to buy supplies or medicines since July 29.

Amid the summer heat wave, Ma carefully wrote down all the medicines the residents needed and rode an electric bike across the city to negotiate with hospitals and then deliver the medications to the residents.

Ma has also accompanied residents to hospitals. She once spent six hours in the children's hospital to help a child with a high fever.

In the Jingming Jiayuan community, volunteers were touched when they noticed a car was unlocked and a note on the windshield read "Please rest in the car if you are tired."

Shi Mingzhou, a volunteer worker in the community, said some of his colleagues replied "Thank you" with the smiling eyes emoji on the note.

To contain the virus, Nanjing ordered an entire community to be quarantined for three weeks if anyone living there is confirmed infected with the virus.

On Sunday, after 20 days of hard work by health workers, the local government, social workers and volunteers, the city reported no new COVID-19 cases. It saw two new cases on Monday.

However, Yangzhou still identified 48 new cases on Monday. The provincial health commission had sent more than 4,000 medical workers to the city in late July to help contain the virus and treat the patients.

Yangzhou started its fifth round of coronavirus testing in its downtown areas on Monday. Of the 1.59 million people tested as of Tuesday morning, 14 tested positive for the virus.

In another development, two senior officials of Eastern Airports, a State-owned company that oversees Nanjing Lukou International Airport－where the latest COVID-19 outbreak that swept through the country started, have been detained by discipline inspection authorities on suspicion of serious violations of Party discipline and laws, the provincial anti-graft body announced on Tuesday evening.

The cabin cleaners were later found to have neglected sanitation and change-of-clothing protocols, which resulted in the virus being transmitted to other staff members and passengers at the airport.