Volunteers help to foster a new generation of guide dogs 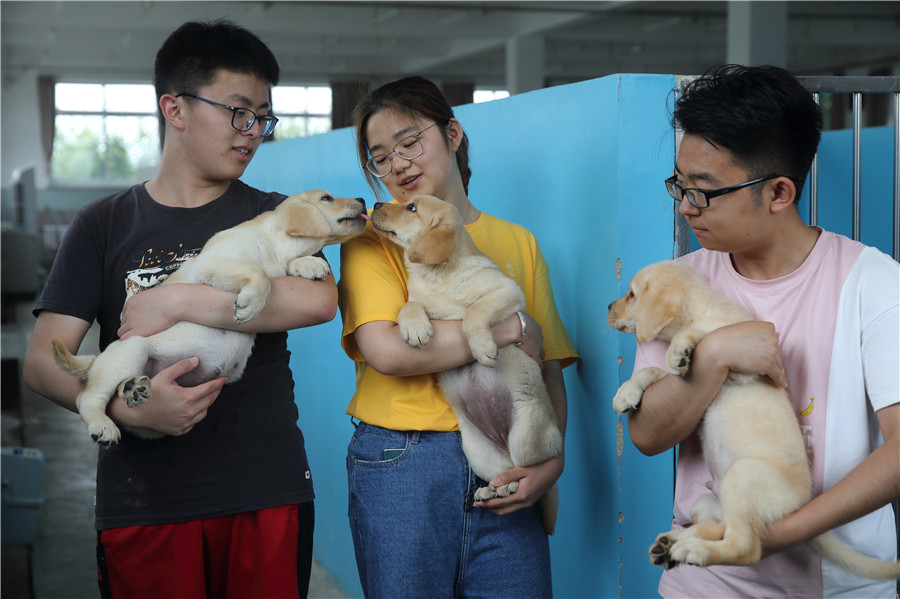 Bubble, a yellow Labrador, is spending the first year of her life with a foster family in Dalian, Liaoning province, as preparation for guide dog training.

"She used to be a naughty girl. She often broke flowerpots and stained her fur with soil. Ripping up slippers with her teeth was also a favorite activity," said Zhao Qiyi, a volunteer puppy raiser who is caring for the 9-month-old bitch.

"Who would have thought that this 'troublemaker' would grow into an intelligent little puppy and will possibly become a guide dog," the 38-year-old said.

"She learned the toilet routine by the time she was just 4 months old, and can now follow simple commands, such as 'Sit' and 'Wait'."

Zhao said Bubble, who was born at the China Guide Dog Training Center in Dalian, has become the family's alarm clock, waking her and her husband at 4 am every day to follow the toilet routine they have taught her.

"We can't sleep late, even at weekends, because of the whimpering sounds Bubble makes at the side of the bed every morning. When we open our eyes, we see her pleading to be taken outside. It's adorable and funny," she said, with a laugh.

This year, more than 30 families in Dalian are caring for prospective guide dogs under the supervision of coordinators from the training center. The puppies spend 12 months with the families being prepared for the official training program. 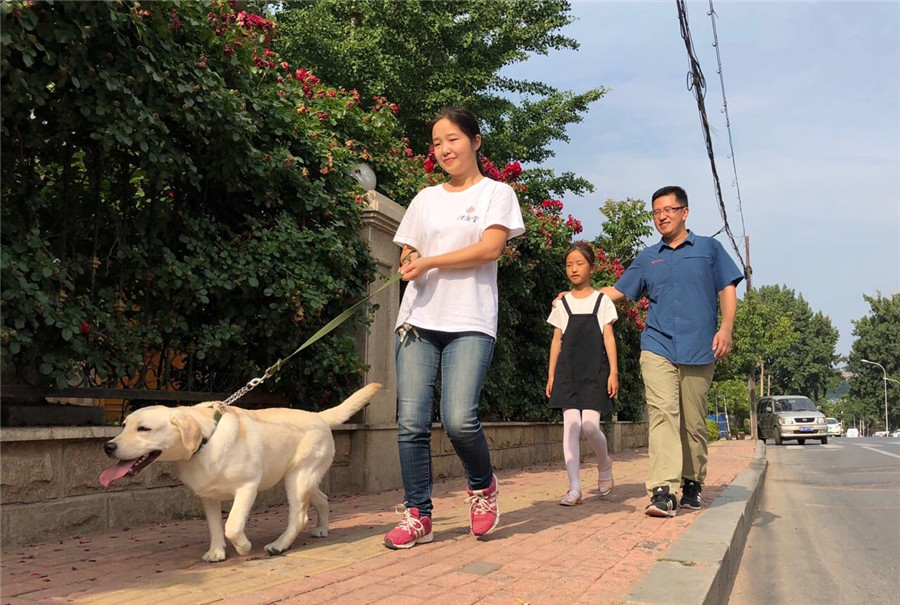 Zhao Qiyi (front) is fostering Bubble, who may be trained as a guide dog, in Dalian. [Cheng Si/China Daily]

Raising prospective guide dogs in foster families is vital to the selection process because being exposed to strict, but affectionate, discipline helps the puppies grow into well-behaved, socialized animals, according to Wang Jingyu, director of the Laboratory Animal Center at Dalian Medical University and founder of the China Guide Dog Training Center.

The center, the nation's first nonprofit guide dog training institute to be licensed by the China Disabled Persons' Federation, has used the services of puppy raisers since it was founded in 2006.

The puppies return to the training center after their first birthday, but during the time they are with the families they are exposed to many different environments, such as stores, supermarkets, parks and public transport, so they become accustomed to general life.

"The puppies learn how to love and how to get on well with humans in a closely connected environment. It's necessary for them to understand companionship because their purpose is to be a friend and guide to a blind person," Wang said.

Those sentiments were echoed by Wang Lin, a handler at the center, who said the training program's success rate has risen to about 70 percent from about 40 percent a few years ago as a result of the care and regular instruction the puppies receive from their foster families.

"We assess the puppies soon after they return from their raisers. Those who are aggressive when they want to be fed are quickly eliminated from the training program. Those who display caution around traffic and are sensitive to people's needs stay on the course, but can be phased out at any time if they fail certain tests," she said.

"Puppies who spend their first year with foster families usually display a high degree of self-discipline in areas such as toilet training. They understand the family relationship and know the places they are allowed to enter and those forbidden to them."

Selection standards for volunteer families are high to ensure that the puppies will be cared for in a safe, happy environment.

"Families with children younger than 5 and those with members who are allergic to fur are not allowed to become involved," said Han Fang, a coordinator of the center's puppy-raising program.

"The coordinators visit the volunteer families every month to offer help communicating with the dogs, preparing their food and modifying their behavior."

The foster families bear the lion's share of the cost of raising the puppy, including food and dietary supplements, which usually comes to 500 to 600 yuan ($75 to $90) a month, but the training center covers medical checkups, treatment and immunization, Han said. 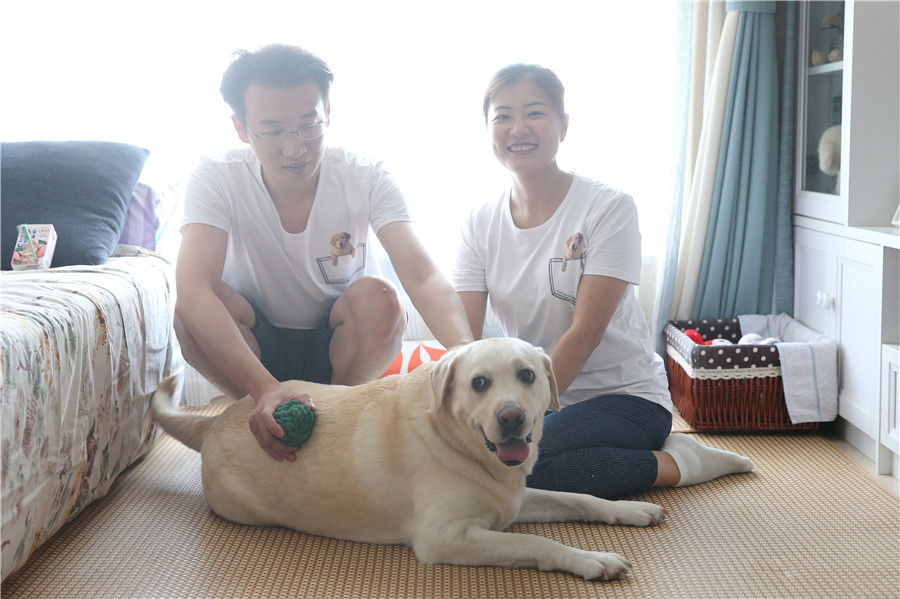 Wang Ping and her husband are providing a home for Bobo, a retired guide dog, in Beijing. [Wang Jing/China Daily]

The latest available figures show that there were 14 million blind or visually impaired people in China in 2012, according to the website of the China Association for the Blind.

However, Liang Jia, a member of staff at the training center in Dalian, noted there are only about 170 guide dogs in active service nationwide, with no more than 15 working in Beijing.

Speaking about the shortfall, Li Weihong, chairman of the association, said, "A lack of financial support and the uneven quality of handlers has led to an embarrassing situation in guide dog training."

Wang Lin, the handler from the training center, agreed with Li.

"Training a guide dog is not easy, and the elimination rate can be as high as 70 percent. Bone growth and temperament, and the relationship between the trainer and the candidate dog are all included in the assessment process," she said.

She added that the dogs have to pass at least four tests during the training program, which lasts 12 to 18 months depending on the animal under supervision, before they are allowed to serve a visually impaired or blind person.

Wang noted that insiders are optimistic that rising public awareness will result in more people volunteering to become puppy raisers, which could, in turn, reduce the number of dogs eliminated from the training program.

However, a greater number of volunteers could also prompt problems because the puppies often experience a short period of disorientation and unhappiness when they leave the secure environment they have known for their first year of life and return to the training center.

"Many puppies lose their appetite completely when they first leave their foster family, but the problem usually disappears after two or three weeks," said Lyu Na, a coordinator at the training center.

"We recommend that puppy raisers do not visit the puppies they fostered for at least a month after they are sent back to the center," the 36-year-old said.

Bubble will celebrate her first birthday on Oct 4, which means she won't be with the Zhao family for much longer. When she returns to the center she will be assessed and a decision will be made about her suitability to undergo training as a guide dog.

"I'm really afraid that she will leave me－in fact, she definitely will leave－but it's an honor to help a puppy grow into a respected guide dog. We really believe that Bubble will pass all the tests. She will be a 'Seeing Eye angel' for her future owner," Zhao said.

Some people who fail to gain entry to the puppy raising program opt for the next best thing.

"I applied to the training center in the hope of becoming a volunteer puppy raiser. But my request was turned down because the program only operates in Dalian. I felt very depressed," said Wang Ping, a 36-year-old Beijing resident who cares for a retired guide dog.

"Fortunately, I finally got Bobo, a 6-year-old who had just retired. I was so excited when I picked her up from the training center (in Dalian) during the Dragon Boat Festival two years ago. It took nearly 16 hours to drive there from Beijing," the former accountant said.

For three years, Bobo, who was born in September 2010, was the only guide dog in Xi'an, Shaanxi province. She joined Guo Xuexia, a visually impaired masseur, in 2013.

Wang Ping's family is the only one in the capital to house a retired guide dog. "I gave up my job to take care of Bobo. Now, she is like a daughter. I lost six years of being with her, but now we spend every minute together," she said.

"I hope more people will learn about guide dogs and offer them shelter, no matter whether they are young or in their twilight years. They have given almost their whole lives to serving people, so it's our responsibility to take care of them."

Meanwhile, the fostering process may become a circular activity because some families propose to not only offer homes to puppies, but also provide shelter for retired guide dogs.

Han, the coordinator from the training center, said: "Normally, when a guide dog finishes its service life it spends its remaining years with the blind person. But now more people are offering to look after retired dogs, especially people who have been volunteer puppy raisers."

"My family won't raise another dog after O.P. returns to the training center in October," she said.