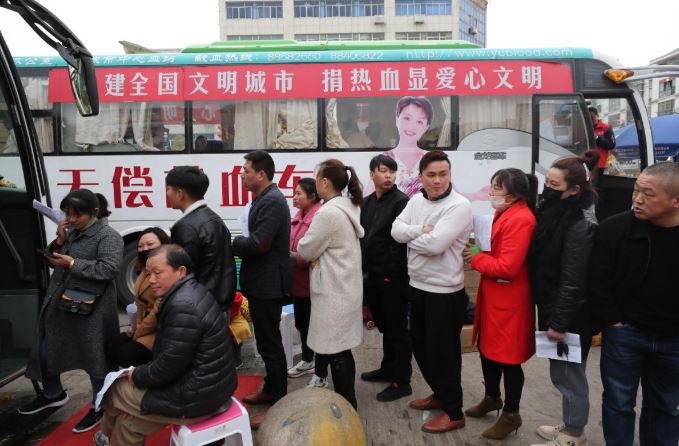 People wait in line to donate blood at a donation point after a deadly chemical factory blast killed dozens in Xiangshui county in Jiangsu province on Friday. (Photo: China Daily)

After an explosion at a chemical plant killed 47, residents of Xiangshui county in Jiangsu province have flooded centers to donate blood for the severely injured survivors.

There were so many people coming in to donate blood that the organizers at one center ran out of application forms, China Daily discovered Friday afternoon.

"On average, people have to wait for at least five hours for their turn," said Meng Xianghua, a member of the local labor union that has been assisting in the drive to build up blood supplies following the blast.

He said one of his neighbors came in at 8 am Friday and had to wait until 1:30 pm to donate. "There are so many people coming that we failed to count how many people have donated so far," he added.

The blast occurred on Thursday at the Chenjiagang Industrial Park in the city of Yancheng, in Jiangsu province, and the fire was brought under control on Friday.

Meng's union has been offering free food and drinking water to those donating blood since the center was set up Thursday.

Gao Shuibao, a volunteer at the local Red Cross society, estimated at least 280 people donated their blood on Thursday and the number stood at more than 200 on Friday morning. 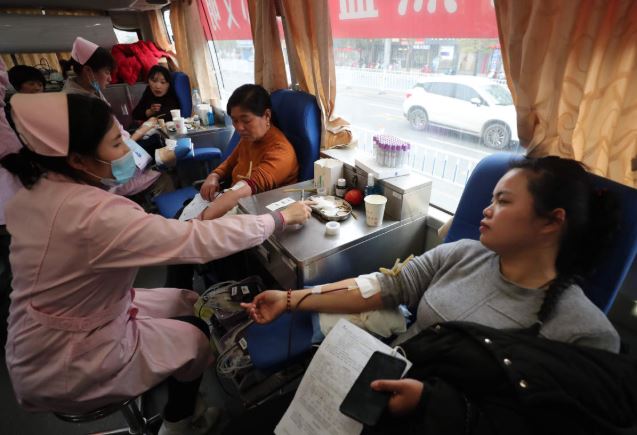 Zhang Yinlong, whose home is about 20 kilometers away from the donation point, had come in for the fourth time on Friday to give blood.

"I came at 5 pm yesterday, but only found an extremely long line. I went back home and came back again at about 8 pm, but had to give it up after waiting for two hours," said the 38-year-old.

The welder spent another three hours on Friday morning but had to quit again as he had to pick up his son from primary school at noon. He joined the line again after lunch, but he didn't have any idea about when his turn will come when China Daily interviewed him at 4:30 pm.

There were so many donators that the organizers brought dozens of stools to the site so that people could rest after waiting a long time.

Many people also came to Xiangshui People's Hospital to offer free food and medicine for those hospitalized. Chen Yueru, a member of local volunteer association, said they have received 2,177 boxes of packed food for lunch, more than 10,000 bottles of water, 24 boxes of ham sausage and 14 boxes of instant noodle and 500 breads at the hospital.

She said clothes are in demand for many of the injured as the belongings of many have been buried in debris and stained with blood and dirt.

Gao, the red society volunteer, said a company has donated about 600 bottles of a special medicine for wound sterilization and has also sent medicine for the injured.