CHINA VP calls for efforts on safeguarding peace in Asia

VP calls for efforts on safeguarding peace in Asia

Vice-President Wang Qishan called for efforts to implement the Global Security Initiative to seek common, comprehensive, cooperative and sustainable security to safeguard peace and stability in Asia, as he attended the sixth summit of the Conference on Interaction and Confidence Building Measures in Asia on Thursday in Astana, Kazakhstan. 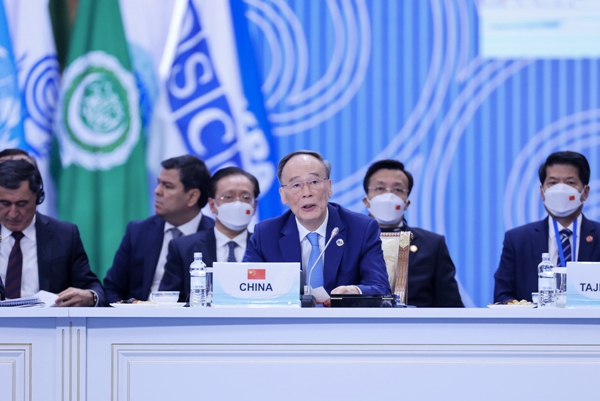 Vice-President Wang Qishan attends the sixth summit of the Conference on Interaction and Confidence Building Measures in Asia in Astana, Kazakhstan, on Thursday. [Photo/Xinhua]

In his address delivered at the summit, Wang said the CICA should strengthen solidarity and coordination to appropriately deal with challenges and be dedicated to building an Asian community with a shared future. He also called on CICA members to push for the implementation of the Global Development Initiative so as to accelerate the United Nations 2030 Sustainable Development Agenda and promote the prosperity of Asian countries.

Wang stressed the importance of learning from each other and transcending differences in terms of ideology and social systems to promote the harmonious coexistence of Asian cultures.

It is important to uphold equity and justice, firmly support each other to follow a development path that meets its own national conditions, maintain the international system with the UN at its core, and promote true multilateralism, he said.

Wang also said China will fully undertake its role as coordinator in related areas and carry out activities for exchanges in areas such as agriculture and green development.

Established in 1992, the CICA has grown into a vital platform for dialogue among countries across Asia with 27 member states. Kazakhstan currently holds the presidency of the CICA.

As the Communist Party of China will convene its 20th National Congress this weekend, Wang said the Congress is held at a critical time when China is embarking on a new journey in building a socialist modern country in all respects.

China will take solid action to implement the goals and tasks set by the Congress in the next five years and beyond, Wang said.

Tokayev praised China's important role in CICA cooperation, saying that it is always the diplomatic priority of Kazakhstan to develop relations with China.

Calling President Xi Jinping's historic visit to the country last month a new milestone in bilateral ties, Tokayev said his country will firmly support the Belt and Road Initiative and work with China to consolidate their permanent comprehensive partnership.